God can’t do everything

We cannot measure God with human metrics. Man’s knowledge obtained over centuries is a drop in the boundless sea of God’s knowledge. We are called to explore what we can about God—though hopelessly under-equipped to do so, because God can only be ever greater than our understanding.

God is not bound in any way to His creation. He remains changeless. This builds our faith in Him: “Jesus Christ is the same yesterday and today and forever” (Heb. 13:8, NIV). One consequence of His immutability is that His love for us never changes, being founded upon Himself, not us. Nothing I can ever do will make Him love me more—or less. Everything we do is a service of gratitude to Him, not to earn merit.

God’s immutable qualities mean that if something is true about Him, then everything opposite to that cannot be true. Consider this short list of His qualities and how they call into question commonly held beliefs.

When we fully grasp God’s eternal nature, we understand that every promise in His Word will come to pass. God is the ultimate planner and we need never be anxious about our future.

SPAIN: TAKING IT TO THE STREETS 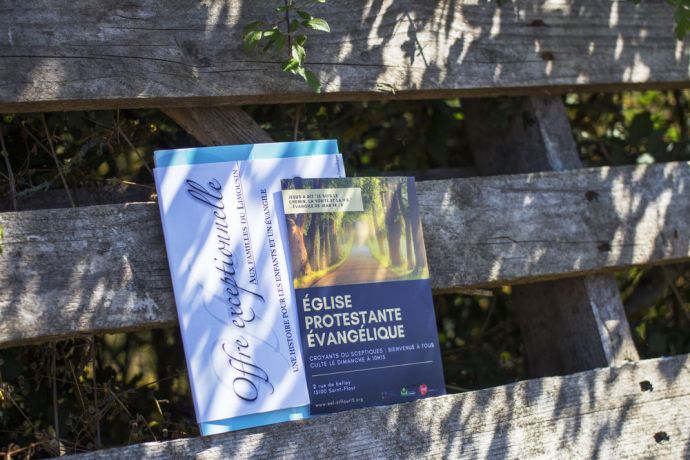 Transform 2018 fielded several teams in Spain, Portugal and France. Every home in Saint-Flour, France received an invitation to an evangelical church in the historical city centre, along with a gospel of Luke. Other seeds were sown through conversations while walking the El Camino pilgrim route in Spain. “Do you think this walk can really change a person’s life?” asked one man. “I said ‘Yes!’ And that was the opening to share the gospel,” wrote a team member. In La Vera, Spain, a team member from Hong Kong shared the gospel with Chinese storekeepers. A local Christian who had spent several years in China, will follow up with those interested in learning more.

One team in Lisbon did not obtain permission to hold a street meeting, so they simply had natural conversations with people on the street, some of whom were interested in knowing about Jesus. Many local Christians were grateful and impressed that young people from far away would come to share the gospel. For Pastor Yann in Bruay-la-Buissière, France, it was a busy week; “The OM team really blessed and encouraged us,” he said. Over 75 people came to a concert on the last weekend, which meant a packed full church, and people were touched by the lyrics of songs. When the church put on a family carnival, all 11 church members worked hand-in-hand with the OM team, running the games, serving food and drinks and generally enabling the activities to go well. Approximately 40 children and their parents (more than 100 people in total) enjoyed a sunny afternoon in the church’s garden! It was a great day and a great way of introducing the church to many people in the community. Please pray for lasting fruit and consider joining the next Transform (in Greece, July 2019).

Tiny spirit houses spin in the wind in front of homes and offices. Fresh food and abundant tea are provided daily as offerings to ensure protection and luck. Temple spires peak amidst urban skylines and rural rice paddies alike. Evidence of Buddhism infiltrates nearly every aspect of Cambodian society, but for many people, religion is less about rituals and more about superstition and following tradition, said Sokhem*, a teacher at OM Mercy Teams International (MTI). Sokhem grew up in a remote province, steeped in Buddhist tradition. After he married, his wife encouraged him to pursue higher education. In order to afford tuition, Sokhem worked at a restaurant run by a Christian woman and attended a weekly Bible study there. “The boss encouraged us to study, to learn, to get to know Jesus, so step by step, I felt in touch with God.” Sokhem read Proverbs, “which has a lot of advice on how to live,” he noted. One day, the pastor who taught the study approached him: “Sokhem, if you want to trust Christ, tell me.” “The answer was already yes,” Sokhem recalled. 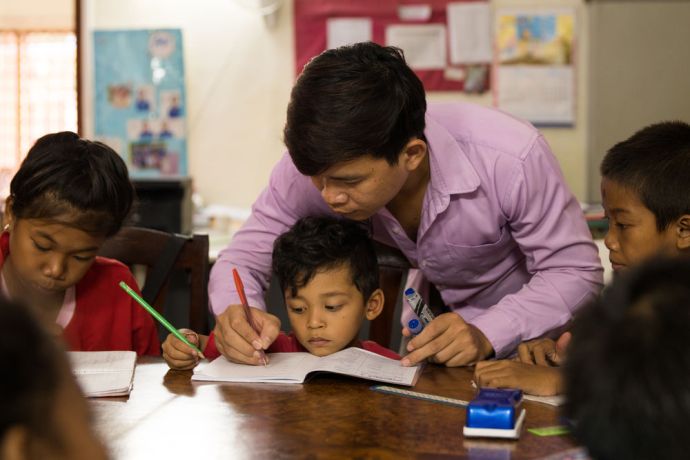 After obtaining a university degree, Sokhem spent two years working at an acclaimed international school. “But I wanted to be with kids who were broken, who were orphaned, who were poor, who didn’t have proper education,” he said. Since joining OM MTI, Sokhem participates in a daily Bible study where the staff read Scripture and discuss its meaning.

OM MTI allows Sokhem to connect with his students and pray for them. He also travels to another province to share God’s Word. “My vision is a church where I can teach English, preach the gospel, have my people come together and worship Him alone.”

A group of indigenous people from the Talamanca region travelled for 10 hours to visit the Logos Hope. Talamanca is one of the least-reached areas of Costa Rica, where OM has been working for many years. “People there have [few] material possessions; they work the land and get little in return for the produce they sell,” explained OMer Roberto Ramirez. “They have little education and very little contact with the outside world.” When OM’s previous ship, Logos II, visited in 2003, there was only one small church in the area with no regular pastor. Since then, OM has enabled a full-time pastor to live in the community, and there are now churches in six different areas and an OM ministry centre. Beyond that outreach, this facility provides a place to train missionaries from Latin America and equip local leaders to
better serve their own people. 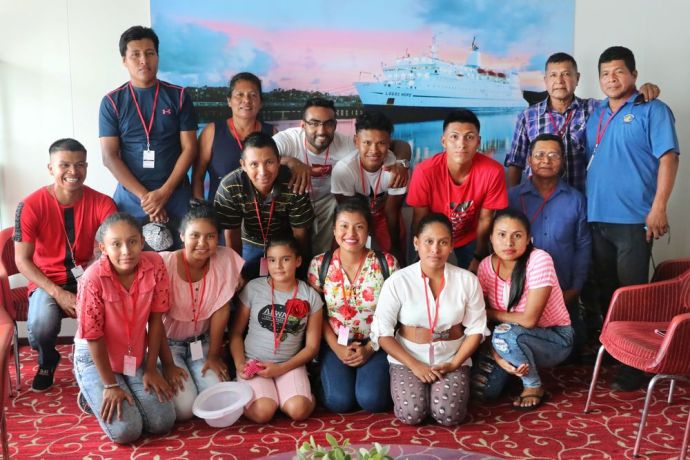 The group who visited Logos Hope is from a community called Sibujú (meaning ‘Land of God’). Their pastor, Pedro Ocon Flores, expressed his gratitude for the warm welcome they received on board. “We are indigenous people; nobody really cares about us or our struggles,” he explained. “But here we feel so loved and honoured and we are happy to be on this ship.”

The group shared about their community’s struggles with addictions, domestic violence, witchcraft, unemployment and lack of proper housing. Crewmembers prayed with them for their community and these issues. The guests were amazed that some of the crew also came from places of poverty, high unemployment and limited access to education. They realised that, though they have similar challenges, there is opportunity for them to be involved in sharing the gospel with the nations. Nine women from Talamanca attended a two-day sewing workshop on board, and sewing machines were donated to help provide a means of income. Meanwhile, three crewmembers had the privilege of experiencing life and serving the community in Talamanca. Learn more about OM’s ministry in Talamanca at: https://youtu.be/1BFIzey7UHI

Rana* a 35-year-old woman shared her story with OM workers recently at the AIDSLink International* care centre. Ten years earlier, she had a beautiful life that came crashing down when her husband suddenly became sick. Test results showed that both Rana and her husband were HIV positive. They were shocked and full of fear. “What shall we do?” they thought. Rana’s husband’s health continued to fail, and he later died. Without a husband and having no children, Rana was alone. 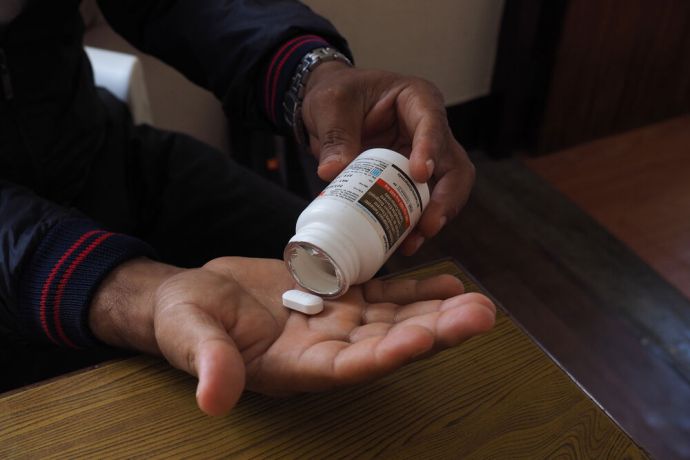 Rana was not able to stay in the home of her husband anymore, so she returned to live with her parents and brother, though she kept her HIV status a secret from them. After nine years, Rana, too, became very sick and though she already knew, the doctor now confirmed to her family that she was HIV positive and sent her to Kathmandu for testing and treatment.

It was there that Rana met the staff of AIDSLink, who were friendly, helpful and understood her situation. They counselled and encouraged her, and helped her with her antiretroviral therapy. AIDSLink also provided her with a place to stay during her time of testing and initial treatment.

Through the work of AIDSLink staff, Rana got the opportunity to understand more about her condition, and she was able to see the hope and joy in the lives of the staff through the way they served. For such a long time Rana felt hopeless and sad, but now, for the first time in 10 years, she had hope and joy. Today, Rana feels well and thinks the future looks much brighter for her thanks to the work of AIDSLink.

*AIDSLink International works in partnership with OM to impact the worldwide HIV and AIDS pandemic.

HUNGARY: SPEAKING FOR THE UNBORN

In early 2017, OM’s Bus4Life ministry cancelled a weeklong outreach and offered the bus to a Hungarian pro-life organisation, Shout for Life. During that first week, Bus4Life visited ten schools in six towns around Budapest. 1,500 students climbed on board the bus and were introduced to foetal development and pregnancy through a specially designed exhibition. Since then, OM has done three other outreaches with Shout for Life. Altogether, more than 5,000 young students have been challenged to consider the value of the unborn. Some schools have allowed the gospel to be shared, too.

The latest outreach took place in September, 2018 when Bus4Life visited several schools in the greater Budapest area. Students were invited to the bus in groups of 15-20. They looked at the exhibition, and watched three short videos about dating, pregnancy and abortion. 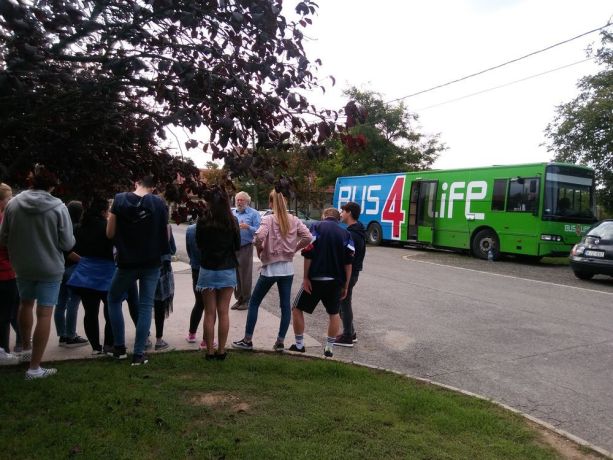 “We want students to understand that they are unique and that God created them,” OM’s Istvan Horvath says. “We talked about God’s plan for their lives, about dating and how you can prepare for a good marriage. We discussed the way media portrays sexuality, and how that contradicts God’s plan for sex.”

Abortions performed in Hungary have decreased dramatically in recent years, partly due to a shift in government policies that seek to strengthen families and encourage couples to have children. But credit must be given to Christian organisations, too, particularly in their efforts to inform and educate the Hungarian youth about abortion.

Thank you for your prayers and support of all OM ministries worldwide.

Published: Tuesday, 27 November 2018
Credit: OM International
© 2018 OM International This email address is being protected from spambots. You need JavaScript enabled to view it.