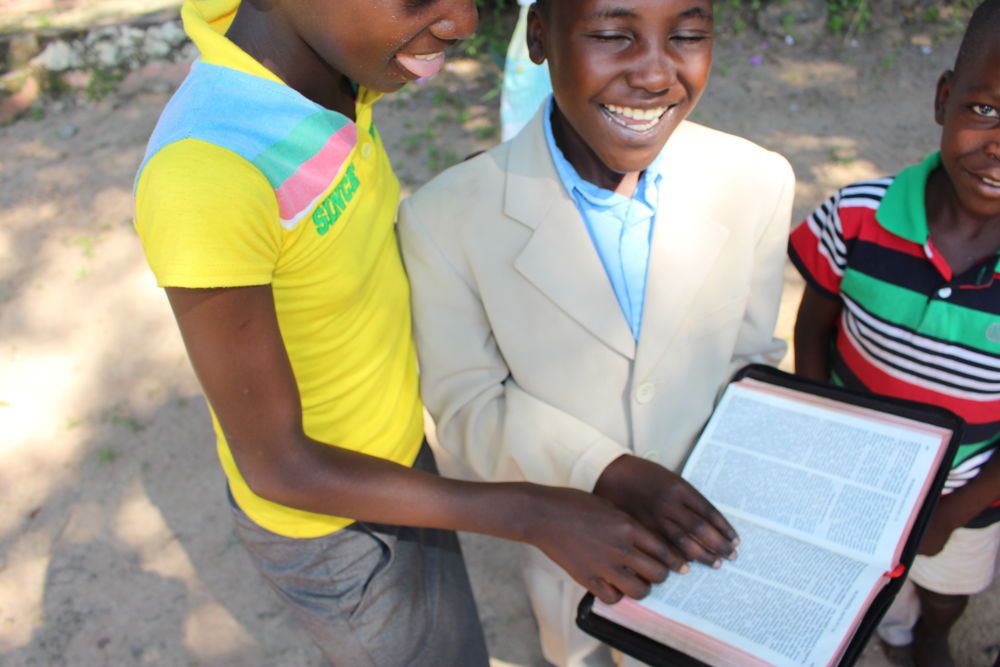 Zimbabwe: Three boys read the story of Jonah for themselves as after hearing it being told by their teacher at school.
No method is infallible when trying to reduce Bible poverty among the least reached, discovered OM worker Matthew Mbeve* in Zimbabwe.

Matthew and his fellow OM team members had always handed out Bibles to committed new church members as chosen by church leaders. One day, Matthew and a local church leader distributed Bibles to members showing the most commitment and promise, as usual. However, despite this seemingly 'good approach,' one encounter left him convinced that no method is infallible.

Bibles have always been distributed in the heart language of the local people, and through the local church leader or missionary working among the people.

“We always thought this was the best way to give away Bibles,” said Matthew. “But ever since I met this young boy asking me for a Bible, I’m not so sure about this anymore.”

After one church service, Matthew was chatting to people when a young boy approached him, asking to see his personal Bible.

Unsure of why the lad had asked, Matthew half-heartedly gave the boy his Bible and put his focus back on the conversation he was having.

Barely a minute later, the OMer heard the young boy scream with joy: “I have found it, I found it!” At this, the boy was soon joined by two other boys who came rushing, and the trio sat to read a portion of the Bible.

Mystified, Matthew enquired of the boys: “What have you found? What is so special about this passage?”

One of the boys responded: “Our teacher told us of the story of Jonah. He did not finish it but asked us to go and read it at home. But none of us have a Bible at home!”

Matthew was shocked, but managed to ask if any of the boys' parents had received a Bible when distribution was done in the church.

“None of our parents attend church,” replied one boy.

Matthew gave his personal Bible to the trio.

“More than two billion people have never had a chance to read God’s Word for themselves. That’s why I am passionate about fighting Bible poverty, and raising funds to buy Bibles and distribute them to the needy,” said Matthew.

“However, the encounter with these boys was like a reprimand to never overlook anyone. This reprimand just re-ignited my passion."

A change of heart

While the Bible remains the most popular and most read book across the globe, more than two billion people have never had a chance to read God’s Word for themselves. That’s why OM in Zimbabwe is making an effort to reduce Bible poverty among the least reached.

In 2018, OM made available—free of charge—over 500 Bibles to 58 different new and up and coming churches located in some of the least-evangelised communities. After learning that OM helped churches receive Bibles, some church leaders started approaching OM, wishing to get some Bibles for their established congregations. However, OM’s approach is to help church leaders and missionaries working among the least reached.

Upon hearing this vision, some church leaders who had come seeking Bibles for their established churches had a change of heart and were inspired to go and share the Word among the least-evangelised and least-reached communities. Reverend Edmore Tshuma is one such church leader, who was inspired to plant a church because he knew OM would help him with audio and printed Bibles. This has seen a numerical increase in church planting processes among least-evangelised communities.

Published: Wednesday, 10 April 2019
Credit: Simon Marijani
© 2019 OM International This email address is being protected from spambots. You need JavaScript enabled to view it.