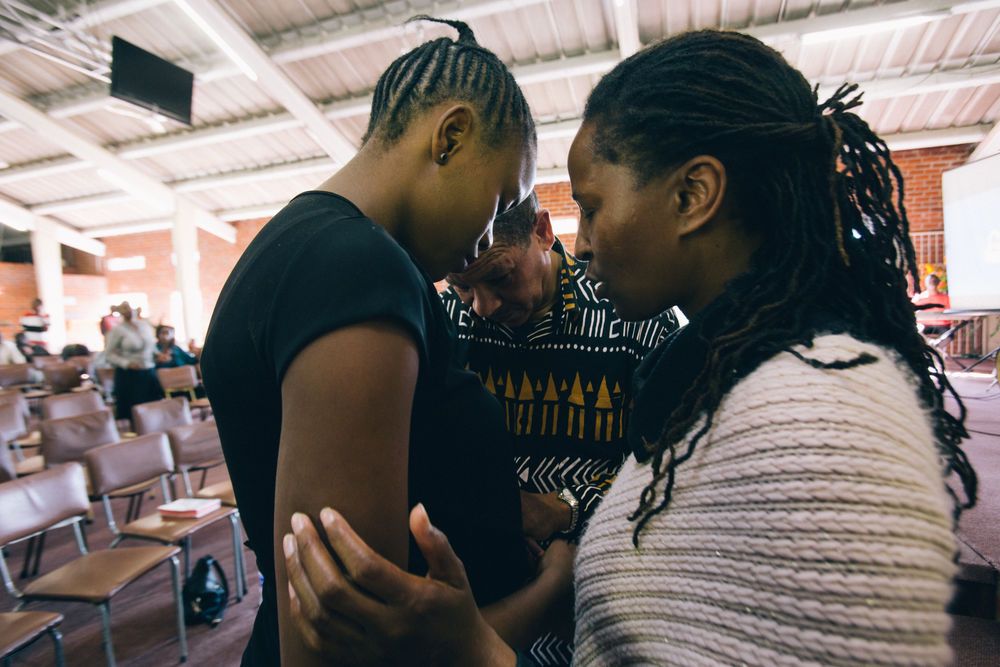 Zimbabwe: OM in Zimbabwe Fielder Leader, Jessica Shumba prays for a believer during a church visit.
“Being the leader of the OM team in Zimbabwe in the current season has been difficult,” Jessica Shumba said. “But if I’d known what it’s like beforehand, I still would have made the same decision. I had no choice but to obey God.”

Looking back, Jessica recognises how God prepared her for the difficult task of leading a missions organisation in a country that’s falling apart economically and politically.

Since receiving Christ at an early age while at school, Jessica has always had a heart for sharing the love she received from God with others.

Right out of high school, Jessica joined Youth With A Mission (YWAM). That journey saw her share the gospel in the United States, Mexico, Haiti and South Africa. She then headed back home to rest and find direction for the future.

During her time of sabbath, an opportunity arose for her to work as a project manager at a Christian NGO, Foundation for Farming (FFF), that teaches individuals and communities productive use of land for better yields.

Although a disciple-maker at heart, Jessica took the challenge of working in the office where she learnt not only administration and management but also gained important insights about relationships with people. “I learnt how to run an organisation in a safe, informal context where the buck didn’t stop with me,” she said.

After serving with FFF for two years, Jessica took on another challenge, as project officer for another Christian NGO (World Vision) and once again learnt invaluable lessons in project management and partner relations.

“In the NGO world I learnt systems, Zimbabwe government laws and regulations,” she said. She now sees how God was preparing her for what He wanted her to do next – although it was against all odds.

After calling time on her involvement with NGOs, Jessica found herself back in the church, this time serving as the administrator for her church. It was at this point that the disciple-making passion in her was rekindled.

She naturally started to look for opportunities to serve in missions and ended up with three exciting options.

Despite the apparent odds

While still weighing her opportunities, a friend challenged Jessica to consider the vacant role for director of OM in Zimbabwe.

In keeping with the true missionary spirit and sense of adventure, Jessica did not dismiss this opportunity even though she knew very little about OM at the time. It didn’t appear to be an attractive option, because the position was unpaid: she’d have to raise finances for herself and for the organisation.

That is not an easy task in a situation of economic decline. However, despite the apparent odds, Jessica quit her paid job and opted to take the OM role. “God spoke to me clearly that this was the next step in my journey,” she recalled.

Living in a country where the economy has been in a free fall for the past two decades with no hope on the horizon made Jessica’s choice seem unreasonable, but she was convinced that she was following God’s will.

While Zimbabwe provided food for the rest of Africa less than two decades ago and was called the ‘Breadbasket of Africa,’ sharp economic decline due to political wrangling has taken many to a place of poverty. The country is now just ‘a basket case.’

There is wealth among a small elite in the capital, but poverty, disease and inequality is more common across the country. These challenges provide huge opportunities for sharing the gospel.

Amid all this, Jessica and her team of fourteen are discipling and equipping fellow countrymen to make vibrant communities of Jesus followers among the least reached–in Zimbabwe and elsewhere in the world.

Jessica is responsible for building ministry, team, resources and networks while ensuring organisational compliance and adherence to the ever-changing laws and regulations in the country. God has also wired her to build and equip people so they can grow and reach their potential.

It has not been all rosy for her nor for the people on her team, Jessica admitted, taking a deep breath. “We work very hard, but our output is not matched by our input. We are learning to celebrate small gains and to be gracious to each other.”

The team has gotten used to improvising as things change often without notice. “Persistent power cuts mean office work cannot be done, problems with transportation make people late for events while the operation of multiple currencies and subsequent changes means an accounting nightmare for our bookkeepers,” she said.

Being director has meant that Jessica must plan ahead, mediate between clashing systems or navigate around bizarre directives from authorities desperate to keep a crumbling system together. She reckons that one of the biggest ministries that she and her team have engaged in has been “to keep our sanity first before we go out to engage.”

Despite the challenges, Jessica and her team minister to eight least-reached people groups in Zimbabwe and challenge their countrymen to go and make disciples of all nations. She said the secret to their relative success is that God has surrounded her and her team with people who are always keen to help with ideas. “I have amazing brothers and sisters who give input,” Jessica said. “And I have friends from across the board, including lawyers and accountants who are keen to provide ideas. That is how God allows us to navigate the stormy waters.”

Published: Monday, 11 November 2019
Credit: OM International
© 2019 OM International This email address is being protected from spambots. You need JavaScript enabled to view it.