Finding hope in the Negev Desert 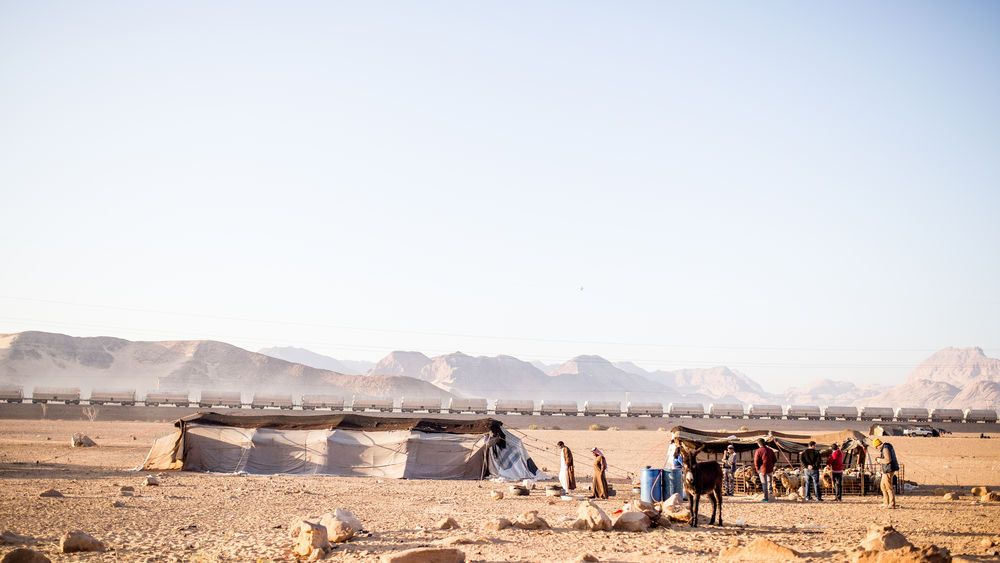 Israel: OM teams visit Bedouin tents in the desert. Photo by Justin Lovett
One day in college, Casey’s* roommate came running in and told her about an opportunity to serve in Israel, exclaiming: “We can live in Israel, share with Jews and Muslims, and we would be in the land of the Bible where Jesus had His ministry!" Casey was hesitant, so her roommate challenged her to pray about it. God gave her a peace that surpassed all understanding about going to Israel, even though it was a country she did not want to go to. A year later, Casey was serving and ministering in the Holy Land.

Since moving to Israel, Casey has had a passion for those who have the least access to the gospel and are suffering the most. She works through her church in Israel, which is Arab Christian. Through her church, she has served in refugee camps, ministered through humanitarian aid and shared the gospel with those who are hurting. Casey knows that with Jesus, there should be peace in place of suffering and pain.

The Bedouin have lived in the Negev Desert for centuries. The word Bedouin comes from the Arabic badawi, which means desert dweller and specifies a nomadic ethnic group. Nowadays, the Israeli Negev Bedouin live in permanent communities instead of traveling.

As a person drives along the highway, they might see lots of desert landscape and then a small hill that has piles of wood, garbage and a small collection of cement shacks. Metal sheets are lined up to form a wall to give a little privacy between the houses and form boundaries to make a ‘street’. This is a Bedouin village.

Most of the people inside these villages are Arab Bedouins. Not all of them are Israeli citizens or have IDs, and some are from Gaza or the West Bank, who moved when the borders were still open. There is a lot of need among the Bedouin villages in the Negev. The villages have very low literacy rates, drug and weapons dealers, people practising witchcraft, abusive husbands and fathers, rampant poverty and a lack of hygiene.

These villages are also unregistered, meaning they are not officially recognised by the government. The people do not pay taxes, and they do not benefit from civil services and functions. The people do not receive any help from social services, and the education quality is very poor. Suffering is widespread and can only be solved by the healing power of Jesus’ love.

Casey recently began partnering with a church ministry reaching out specifically to Negev Bedouin women and children. The ministry involves distributing food and clothes to families and, through relationships formed, sharing the gospel with those who are interested. Casey and other volunteers also host Bible study meetings for youth aged 14-18 and share a story from the Bible each week with the kids. They also host study sessions to help kids with their homework.

When she started serving among the Bedouin, Casey said: “I was overwhelmed by the feeling that these women are imprisoned and oppressed by their community, culture, religion and husbands. Some of the men have multiple wives and some of the husbands do not take good care of their wives and family. We saw one lady yesterday who was beaten and abused by her husband. …The beating was so bad that she had to have surgery. Another lady from Gaza killed her husband and then was on the run and settled in one of these villages. And another lady, before she was married, was imprisoned by her brother for two years in a shack with no windows. Each woman has a tragic tale to tell.”

Despite all of this, there is hope. Casey recognises that God does not want people to be living in pain and separation from Him. Instead, He wants to introduce them to the true freedom found in Jesus. God has given Casey the strength to continue to serve.

Seeing people who are displaced, unable to work and unable to improve their situation, Casey remarked: “You think to yourself, 'I am just one person. How can I do anything that will make an impact?' But God is a really big God, and we don’t have to solve the problem for every single person out there. If we trust in God and do what He is calling us to do, we can impact a few lives, and that is a start to solving the problem.”

Trusting in God, Casey sees that He will provide ways to deliver people from the suffering which comes from separation from Him.

Not her first choice

Casey grew up in a Christian home to missionary parents in Papua New Guinea, which is where she spent her earliest years. She remembers first encountering Jesus’ love when her mother read her a book which explained that Jesus sacrificed His life for her. That moment, Casey knew Jesus was her Saviour and she needed Him. She learnt early on that Jesus’ love is the only thing that can heal those who are suffering.

Even as a young child, Casey knew she wanted to be in ministry. In high school, Casey was invited to spend Christmas break in Jordan with her uncle and aunt, who were serving there. From Jordan, Casey took two days to travel to Israel. She says: "The trip was actually really stressful, and I almost did not make it across to border back to my aunt and uncle. From the experience, I was interested in the Middle East but not Israel.”

While Casey was attending Bible College, she read books on Islam and how the gospel relates to Muslims in the Middle East. She talked to her uncle about joining him in ministry in Jordan, and from a logical perspective, everything made sense for her to serve there. Even still, Casey did not feel peace about working in Jordan.

Not until her roommate introduced the idea of serving in Israel, and Casey prayed through the possibility did she realise that the Holy Land was exactly the place God intended her to serve.

Because of the spread of the new coronavirus, Casey currently has limited contact with the people she has been ministering to in the Negev desert. Travel between cities has been restricted, and her ministry is suspended, like many others, until the stay-home orders are lifted.

Published: Thursday, 16 April 2020
Credit: Annie Reed
© 2020 OM International This email address is being protected from spambots. You need JavaScript enabled to view it.