An important role in God’s story 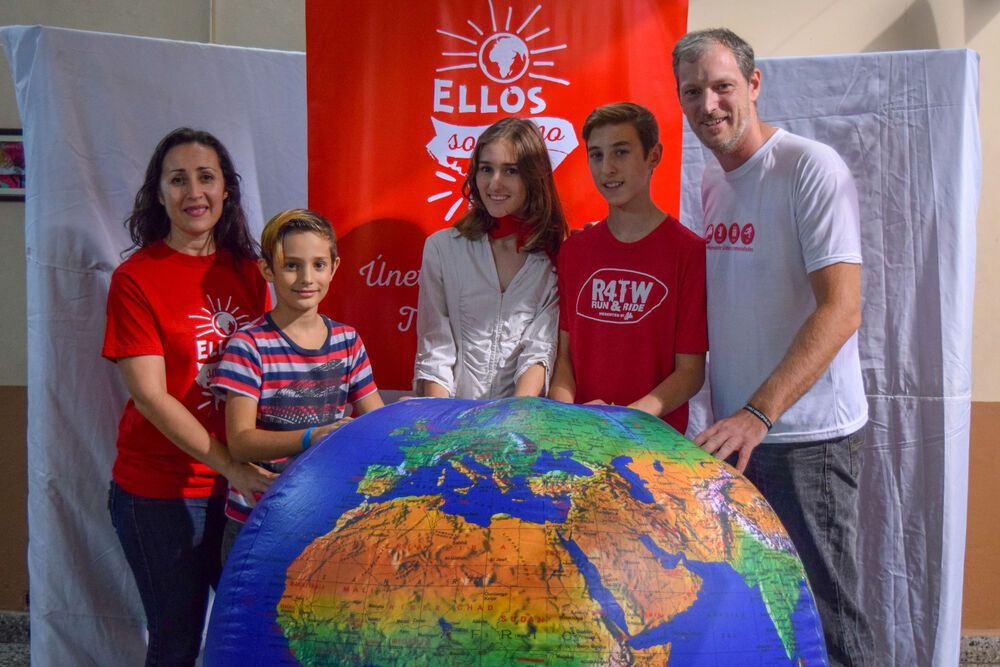 Argentina: Markus Leder and family. Photo by Kate Toretti.
When Markus (Germany/Netherlands), his wife, Vanesa (Argentina), and their family joined OM in Argentina in 2005, their goal was to motivate Christians in Argentinian churches to share the gospel with others. However, this purpose was not realised until a decade later.

For those 10 years, OM in Argentina was heavily involved in local outreach—football programmes, English classes, children’s ministry and more. With six days of ministry every week, there wasn’t time to visit churches and teach about the need in the world.

In 2015, Markus became the leader of the OM team in Argentina. Through a self-evaluation process, the team realised their direct ministries were not related to getting the church involved. Slowly, they began to align their ministries with their vision.

In 2017, all of the OM teams in Latin America adopted a unified goal to send 2,000 well-prepared Latinos to share the gospel with the least reached in the world by 2028. “We finally felt permission to focus on different things,” Markus recalled.

Getting Argentinian churches involved in missions

Stepping full-time into motivating churches to share the gospel was a challenge, as traditionally, the Argentinian church received missionaries instead of sending them. “In terms of missions, Argentina is considered ‘reached’,” said Markus. About 90 percent of the population is Catholic, even if many people don’t practice it. There is also a growing evangelical presence throughout the country, and access to the gospel is everywhere. “However, churches here aren’t made aware much of the need for every Christian to share the gospel in countries where people have never heard the message of hope.”

The reason for this is a combination of things. Culturally, the traditional method for mission workers to raise financial support isn’t accepted - and is almost impossible in a struggling economy. Also, lack of information about the least reached plays a role.

“When we went to churches and talked about the almost three billion people without access to the gospel, and about how the Great Commission is for every Christian, including Argentinians, they got excited ,” reflected Markus. “I’ve seen some people weep because they want to do something in the world that matters for God, whether they support someone or go themselves. Many Argentinians feel disconnected from the rest of the world, because geographically they are so far away and travel is expensive. But they are an important part! When we speak about missionaries working regular jobs as professionals, they realise they can do it too, and pastors are encouraged by how this supports their vision without financially straining their churches.”

From 2018-2020, OM teams travelled throughout Buenos Aires province and to distant locations within Argentina to speak at churches, conferences, schools and camps. “Every weekend, we had at least one event, if not multiple,” remembered Markus.  Through a growing online presence and church visits, word about OM in Argentina spread, and they purchased a building to be a combined Mobilisation Centre and hostel.

In 2019, Logos Hope, an OM ship, visited Argentina, hosting over 260,000 visitors in four ports. Afterwards, Christians all over the country asked how to be involved, and churches wanted the team to visit, speak and train their congregations. “We had the people needed for the original dream of a team in every province,” Markus said. “We just needed to train them.”

At the beginning of 2020, the schedules for OM in Argentina and the Mobilisation Centre were filling quickly. Because many of the newest mobilisers lived too far away for physical meetings, the office started online training, with plans for trainings in Buenos Aires for those who lived closer. When the COVID-19 crisis hit, all in-person events were cancelled, and Argentina remained in strict lockdown for six months.

Suddenly, online meetings were the only option. OM in Argentina went virtual, from livestreams on social media to Zoom meetings. They also partnered with other OM teams and mission organisations throughout Latin America, streaming from Mexico to Chile, featuring speakers from different countries and organisations—the body of Christ working together toward a shared goal.

They also held seven-week trainings called Xplore, focusing on Latino believers discovering God’s mission and how to share His love in any context. “Our vision for Xplore was to mobilise 1,000 believers with little or no mission involvement and guide them to discover their place,” explained Markus. The course was dedicated to practical involvement, with examples of what OM was doing and of how people could be involved right away.

In all, 1,200 people attended Xplore online throughout Latin America in 2020. In Argentina, nearly 100 people signed up to become mobilisers in their communities afterwards. Others are seeking further training for when borders open, whether it’s learning English, finishing university or even choosing a profession specifically for overseas mission. Many committed to intercessory prayer, and businessmen are strategising how use their companies for eternal impact.

In 2021, motivating Argentinian Christians to share God’s love with the least-reached continues to change as COVID-19 restrictions remain in place. Though limited physically, the OM team continues to increase its impact as believers throughout the country unite in prayer and preparation for open borders, fulfilling their important role in God’s Great Commission.

How can you be involved in sharing God’s love, both locally and overseas? Are there trainings or preparations you can complete while waiting for COVID-19 restrictions to lift? Check out OM.org for more information!

Published: Tuesday, 05 January 2021
Credit: Jane Knoop and Kate Toretti
© 2021 OM International This email address is being protected from spambots. You need JavaScript enabled to view it.