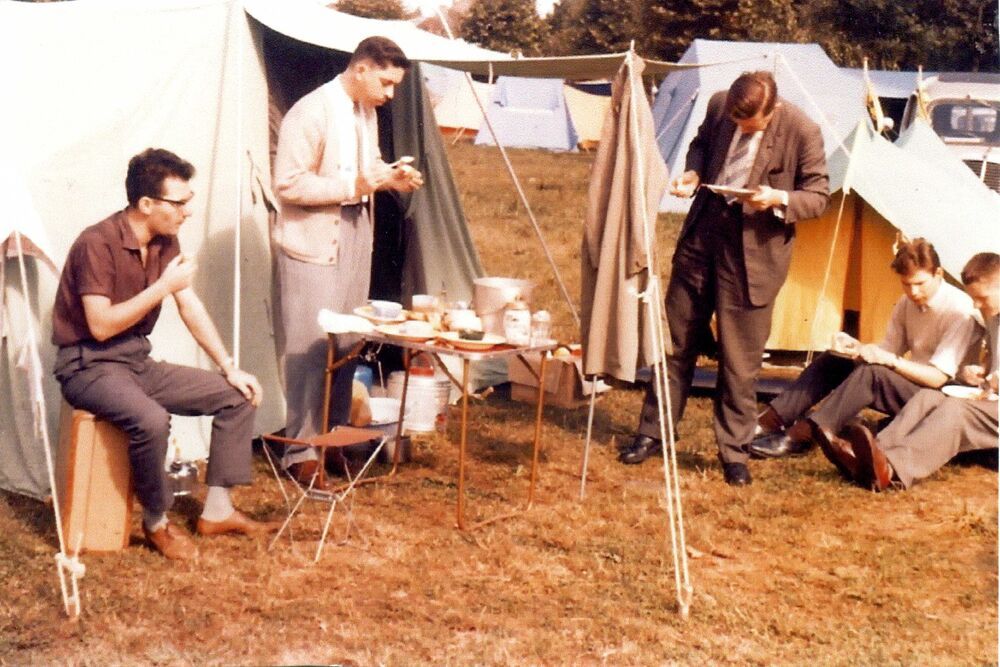 International: Gerry Davey and others at one of the Summer conferences at Lamorlaye, France, in the sixties.
OM began on the cusp of the '60s, when young people worldwide were challenging the status quo. This was the perfect environment for an iconoclast like George Verwer and his non-conformist followers to bring a clear call to radical discipleship demonstrated in lifestyle and philosophy, not for a summer but for a lifetime. Its purpose was to put God and His kingdom above all else, particularly personal comforts.

"The Spanish Manifesto" written in 1961 by a group of early OMers—"25 students in love with Jesus Christ"—captured this spirit: "The Lord Jesus Christ was a Revolutionist! Consider...His most basic teachings: 'Love your enemies. Whosoever will be chief among you, let him be your servant. Lay not up for yourselves treasures in Earth. Except a man forsake all that he hath, he cannot be my disciple'...The Lord Jesus broke with any cultural pattern which interfered with the life of sacrificial love which He came to give! The individual who would live this life is of necessity a revolutionary individual, a cultural non-conformist, a 'fanatic', if you please! Literal adherence to the principles laid down by Jesus Christ would, without a doubt, result in worldwide revolution... It is true that we are only a small group of Christian young people, yet we have determined, by God's grace, to live our daily lives according to the revolutionary teachings of our Master. [Herein] lies the power that will evangelize the world...We will press forward until every creature has heard the gospel."

OMers became known for their enthusiasm to live radically, both in lifestyle and worldview. George, of course, led by example; every non-essential was challenged since, after all, that second pair of shoes could pay for a thousand tracts or fuel for reaching another village. After receiving a sacrificial donation from a small Mexican church, George asked the pastor if he had a suit (he did not). Sitting in a darkened van, George said, "I have plenty of clothes" and took off his own suit, passed it to the pastor and drove off. He arrived at the team house around midnight, wearing only his underwear. This was typical.

The OM culture was radical in fostering multiracial, multiethnic teams that strove to esteem each other and thus prove the power of the gospel. This transparent, simple lifestyle spoke highly to national believers accustomed to seeing Western missionaries living at a higher level. Teams shared accommodation (even if only the back of a truck) and life in general. An "OM Happening" in 1969 in India was advertised as "living, eating, sleeping, praying, preaching, studying with young people from across India, England, America, Africa and Europe." Attractions were listed as "sleeping on the floor and eating off banana leaves." This was pure OM vocabulary.

Convinced that every person should hear the gospel at least once, OM teams became "as shrewd as serpents and harmless as doves" in distributing literature or otherwise engaging people. Teams would work throughout the night, putting Scripture into every mailbox, staying one town ahead of police.

Specialised vans were built with secret compartments for smuggling Bibles to grateful churches behind the Iron Curtain. Even in 'free' countries, teams were motivated to sell vast quantities of literature not only to spread the gospel but to buy food and fuel their vans.

OM was passionate about breaking down barriers between church and parachurch organisations. In the early decades, few if any other organisations would entrust leadership to young people, or submit to national leadership as westerners. George's own example of 'walking in the light,' admitting weaknesses and seeking forgiveness—a practice he continues to this day—helped to keep the movement on track and has motivated countless others to do likewise.

The vision for a ship in the early '60s was definitely radical but, after little more than a decade of experience that proved not all was 'sorted', it was equally radical to commit to a second, larger vessel. When final negotiations began with the Costa family that owned the Franca C (later to become Doulos), it was unclear whether OM had the finance in hand. Yet a Costa representative remarked about OM, "When they pray, they pay!" This proved the principle seen throughout the movement: God is at His strongest when we are at our weakest.

Looking back, George Verwer wrote, "When I was a young Christian, I had a tendency towards extremism and super-spirituality. If I had not learned to accept the human factor in myself and others, I would have been knocked out of the race very early on."

Yet OM is what it is today because of thousands of radical supporters: those who have faithfully prayed for decades, those who sacrificially help to finance teams and projects, and those who enthusiastically challenge others to join the movement.

Current International Director Lawrence Tong says there is still place for fanatics, for living radically for a cause: "God uses fanatics—intensely focused individuals—in our midst to challenge our presumptions and cause the kinds of changes we need to grow and develop. We need to create space for those who are different from us and who will push us toward excellence and new thinking. 'Love the Lord your God with all your heart and with all your soul and with all your mind' (Matt.22:37; NIV). That is the best kind of fanaticism I know of!"

Greg Kernaghan joined OM in 1978, a time when most of OM's pioneers were still in leadership and when tales of early exploits could be heard of first hand. He and his wife, Anni, have served on the ships, in Finland, Canada and as part of the OMNI (communications) team internationally.

Published: Saturday, 12 November 2016
Credit: Greg Kernaghan
© 2016 OM International This email address is being protected from spambots. You need JavaScript enabled to view it.