God’s loophole in the Iron Curtain 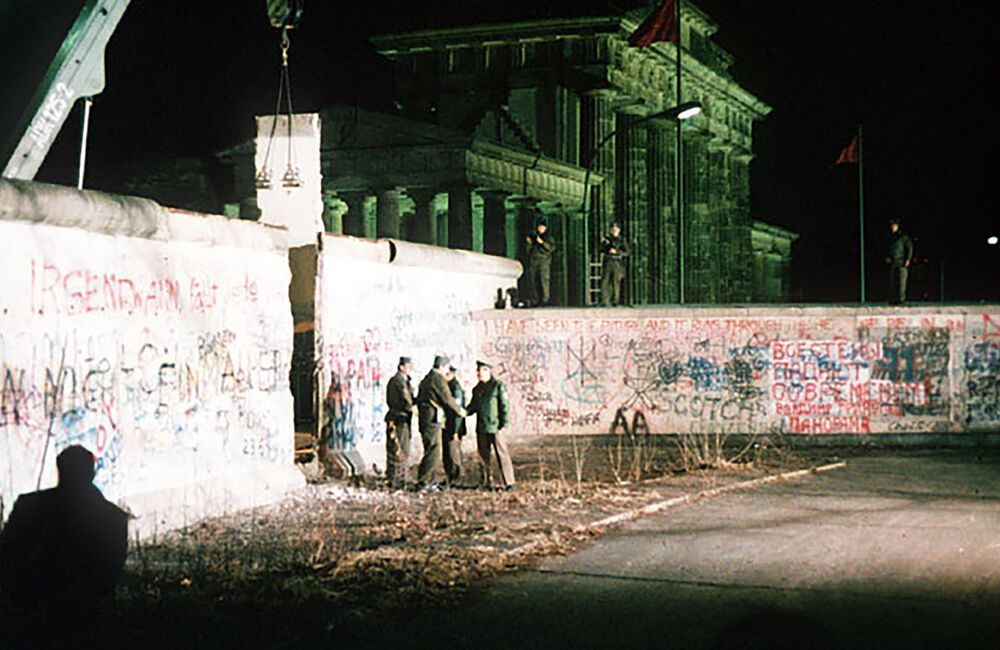 International: A section of the Berlin Wall is removed after the fall of Communism in Central and Eastern Europe.
Compelled by the need, Glenn*, Dale Rhoton and Stuart McAllister smuggled Bibles to persecuted believers and unreached people behind the Iron Curtain. In awe at God’s intervention, they reflect on experiences that increased their faith, shaped OM’s vision and impacted lives in difficult places.

Excited and scared, Glenn* and a friend followed God’s prompting to take Christian literature into Soviet Russia in 1982. With 52 books taped to their bodies, they approached Russia’s border.

“Five men pointed machine guns at me,” Glenn said. “My heart was pounding.” Beginning to sweat beneath bulky winter layers, Glenn felt the tape loosen. “I thought some of the Bibles would fall out of my trousers,” Glenn explained. “But I kept instructing my soul: ‘In Jesus’ name, these Bibles cannot be found.’”

A guard searched the young American, squeezing every part of his body, starting at his ankles. “I felt the Bibles press into my skin,” Glenn said. “Then the thought came to me: The Word became flesh.” As the guard checked around his stomach, Glenn looked out the window, praying silently, not knowing what would happen; possibilities of a Siberian gulag entered his mind. Then, the guard reached Glenn’s head and told him, “You can go”. “It was the first miracle I experienced,” Glenn emphasised. “It changed the course of my life and gave me a special love for people in the former Soviet Union.”

“When you experience this, you’re ruined for life in a special way,” Glenn declared, still with OM today. “Our God can do anything!”

The vision for smuggling Scriptures sparked when OM’s co-founder, Dale Rhoton, met Pastor Richard Wurmbrand in Communist Romania, shortly after the pastor’s release from prison in 1964. Dale scanned the apartment, trying to identify the man who endured 14 years’ imprisonment. Unable to pick him out, he asked his neighbour, who “…pointed to a man whose face was shining,” Dale said. “His excitement, dedication and willingness to risk his life again overwhelmed me.”

Subsequently, he learnt that the pastor had suffered because of betrayal. Later that day, during another visit, a man greeted Richard warmly. “They hugged and kissed in Romanian style,” Dale recalled. Walking on, Dale commented, “That’s interesting: He has the same name as the man who betrayed you.”

“That’s how he dismissed the man who betrayed him!” Dale uttered, emotion welling up. “It wasn’t a nice warm cell, but a place of torture; he showed us holes in his back, where they had ripped out flesh.”

Spurred by Wurmbrand’s testimony and believers’ desire to receive Scripture even at great cost, Dale started Greater Europe in 1968. They usually concealed books in altered vans, but once Dale simply loaded four suitcases aboard a train to Bucharest; while other passengers' bags were checked, nobody paid attention to his luggage. “When I delivered the Bibles, the local believer was amazed to see how much was in there.” Dale said.

Stuart and three OM workers spent 40 days in prison in Yugoslavia. “We were amazed at how eager others were to know us,” Stuart remembered. Friendships developed and they shared their faith. “We used symbols and stumbling words to convey Christ,” Stuart said. “One man in particular showed signs that his heart was stirred.”

Stuart’s wife, Mary, joined one of OM’s first outreaches in post-Communist Albania. On a mountain trek, their local guide, Burim*, translated as Mary spoke of attempts to spread God’s truth in Communist Albania. When she told how they had sealed gospels in bags and floated them into the country downriver from Greece and Yugoslavia, Burim spoke up. Previously a secret policeman, Burim had collected and destroyed the gospels he found. Curious, he read it for himself, though not responding initially. Once Albania opened up, and he heard individuals preach, including OM workers, he chose to follow Jesus.

“His testimony made me praise the Lord!” shared Stuart, who met Burim later. “He was delighted to know that, even in that phase of his life, God was reaching out to him.”

Twenty-five years after the fall of Communism in Central and Eastern Europe, OM teams are based in many of these countries, using the opportunity of greater freedom. An OM publishing ministry produces print and digital literature, including Wurmbrand’s Tortured for Christ, to bring hope.

“There are so many places where we can help, give or work,” Stuart concluded. “The big question for all is: Who or what has our heart?”

Inger R. loves to give people a voice by sharing their stories as she writes for OM’s EurAsia Support Team (OM EAST). She is from Scotland and is half Danish and likes drawing, playing the drums and enjoys a good brew of British tea, which she sometimes spills while laughing.

Published: Saturday, 10 December 2016
Credit: Inger R.
© 2016 OM International This email address is being protected from spambots. You need JavaScript enabled to view it.