Pioneers and icebreakers in the Middle East and North Africa 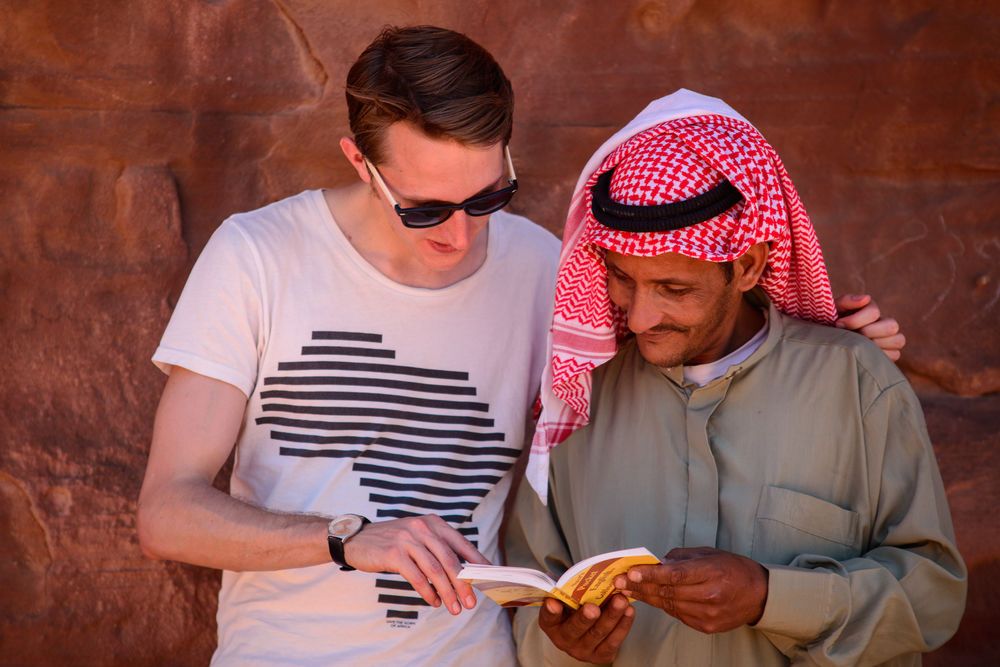 International: Young men trek through the Middle East and North Africa bringing Scripture to those least reached. Photo by Garrett Nasrallah
OM’s work in the Middle East and North Africa (MENA), a 21-country area, began in 1962 when a handful of workers circled the Mediterranean Sea in an old truck. “From Madrid they drove to Gibraltar, took a ferry to Tangiers and then slowly drove through Morocco, Algeria, Tunisia, Libya, Egypt, Jordan, Lebanon and Syria. They then went straight back to France for the first major OM summer campaign,” recalled Nancy*, a long-term OM worker.

During their trip, the team distributed flyers for the then North Africa Mission (NAM), advertising its Tunis-based Bible Correspondence Course. The subsequent response—hundreds of letters poured into NAM—contributed to the NAM workers’ expulsion from Tunisia and relocation to southern Europe, where they continued their ministry.

When another couple in Jordan heard of the effects of the OM team’s distribution, they didn’t want the OM truck to come but, when it arrived, the couple invited the team to stay in their house. “A matter of damage limitation,” Nancy explained.

The OMers welcomed the hospitality but spent all night praying on the roof. Shocked by the team’s dedication, the host couple subsequently joined OM. Three years later, the husband became the field leader of OM’s work in the Arab world.

“A very important aspect of OM's work in Arab countries is that we were pioneers and icebreakers in many countries,” stated long-term worker Clara*, who has lived in the Arab world for 45 years. “We also had mixed teams of Arab believers and all kinds of nationalities!”

From 1963–1970, small teams served in Lebanon and Jordan; work in Israel began in 1964. In 1966, a men’s team based in Jordan distributed literature into Syria, Iraq and Kuwait.

On one Kuwait trip, they had to empty their vehicles because officials suspected drugs. When all the books were confiscated, the team drove to Kuwait City with their intended source of income for the month gone. That night, the men prayed for four specific things: a place to stay, that the books would be released, permission from the local church to do outreach and for the political situation in Kuwait to calm down. The next day nearly all their books were returned, and the church allowed them to stay and do ministry.

“Because they didn’t have any money, some of them sold their blood and then went selling books,” recounted Clara, whose husband was on the team. Those books sold well and the men stayed for a month.

By 1975, most OMers had left Lebanon because of its civil war, while new teams sprouted in North Africa. In 1989, long-term worker Craig* pioneered OM’s work in Syria. Two years later, OM split the Arab World Team into six fields, “but it was all really small,” Craig remembered. At that time, workers from the entire Near East Field could fit into one van.

During the ’90s, OM’s presence in the Arab world grew drastically. “One of the most exciting things we did…were the Love Lebanon conferences and outreaches, which became Love Middle East. Conferences were held in Lebanon, and mixed different Arabic-speaking nationalities on teams—Lebanese, Egyptians, Sudanese, Syrians—were sent all over. Some later conferences were in Egypt, and Algerians joined in,” Clara said.

Through it all, “God is still working with His people,” Craig said. “We may not be seeing all the fruit we want, but we are seeing lives transformed. Then, just handfuls here and there. Now, it’s in the thousands.”

Revival is sweeping Algeria’s Kabyle region. Thousands of Syrians have found Jesus. “What we see among the Somalis we couldn’t even dream of a few years ago. Among all these groups, the Lord is raising national leadership,” another long-term worker noted.

Today, OM is one of the largest mission agencies working amongst Muslims. “We’re very diverse as a region in terms of nationalities. In some of our fields we have significant national leadership. We collaborate with local and international organisations and churches,” described the OM MENA Area Leader.

Still, many Muslims do not know Christ and have no opportunity to hear the gospel. “We need to keep pushing on, keep pioneering, keep going to those places where others are not going,” he challenged.

Political and technological changes have impacted OM’s work in MENA. Some ministries still value printed books; others prefer multimedia. Teams send Scripture via SMS to local contacts and pass out phone chips instead of paper tracts.

“At one time, you just hitch-hiked across North Africa,” the OM MENA Area Leader noted. However, “our context has changed; the world has changed and, therefore, we have to continue to be innovative…but with those same underlying core values.”

“We still have the same passion: To reach the unreached [with the gospel],” Clara affirmed.

“The pioneering character with which we started has continued,” the Area Leader agreed. “It’s challenging but very exciting times. I’m full of hope for the gospel.”

Published: Sunday, 20 November 2016
Credit: Nicole James
© 2016 OM International This email address is being protected from spambots. You need JavaScript enabled to view it.