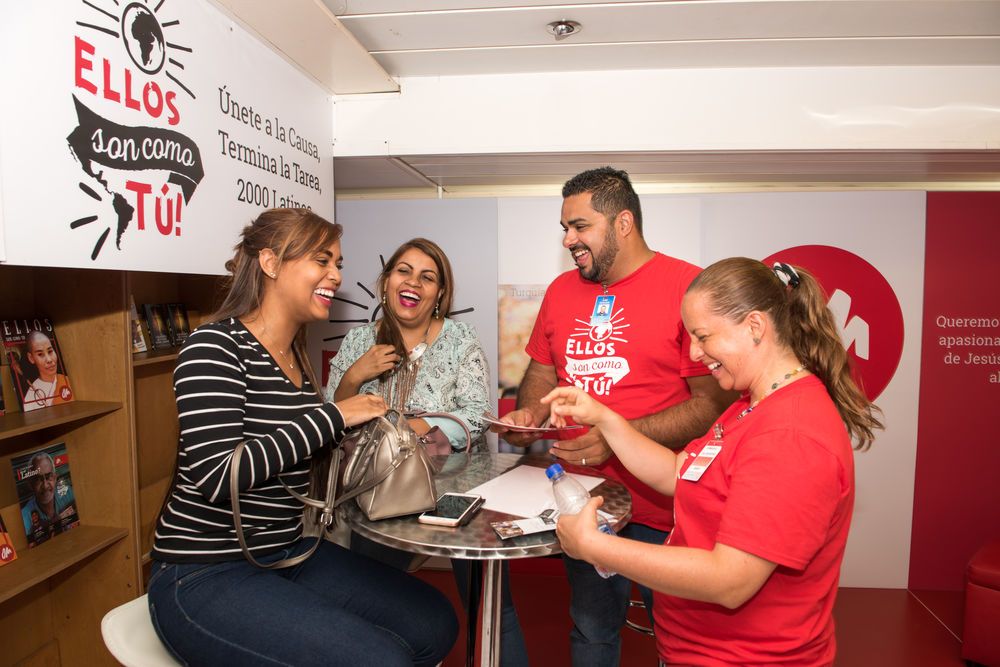 The ship’s presence on the continent for the coming two and a half years will be a platform for the Ellos son como Tú! (They are like you) initiative.

The slogan is backed by a mobilising campaign to encourage missionaries from Latin America to take the message of the gospel to parts of the world which are considered least reached. OM aims to train and send 2,000 Latinos to specific mission fields over the next ten years.

Living on board Logos Hope for the coming years are Alex and Julie Paniagua (Costa Rica), Associate Area Leaders for OM in Latin America. In training sessions for the ship’s community as they made the voyage towards Colombia, Julie told the volunteers: “My heart breaks for countries and people who haven’t had a chance to hear what we have heard and responded to. So many people are broken, lost, and have no healing. If Jesus were to return today, they would not be able to celebrate and be in relationship with Him, as we look forward to being.”

The crew was given statistics which point to there being more than 2.8 billion people worldwide who have little or no access to the gospel or to communities of believers. This figure rises by 57,000 every day as the population increases.

Alex Paniagua encouraged Logos Hope’s community: “Our job is to make sure that we are faithful and we witness. You are on this ship because you received that calling and you believed the Great Commission. Your story – the fact that you are here and that you boldly obeyed the calling – is enough for you to speak into somebody else’s life and say, ‘You too can go.'”

Events on the ship will be tailored to encourage Christians to consider mission for themselves, and to help churches understand how to raise funding for and offer ongoing support to missionaries. Already, Colombians are excited about the part they can play, with Operation Mobilisation having received hundreds of enquiries about joining and pledges of financial support.

Published: Tuesday, 09 January 2018
Credit: Julie Knox
© 2018 OM International This email address is being protected from spambots. You need JavaScript enabled to view it.

Cartagena, Colombia :: Logos Hope partners with Youth With A Mission (YWAM) in an outreach to a troubled community.