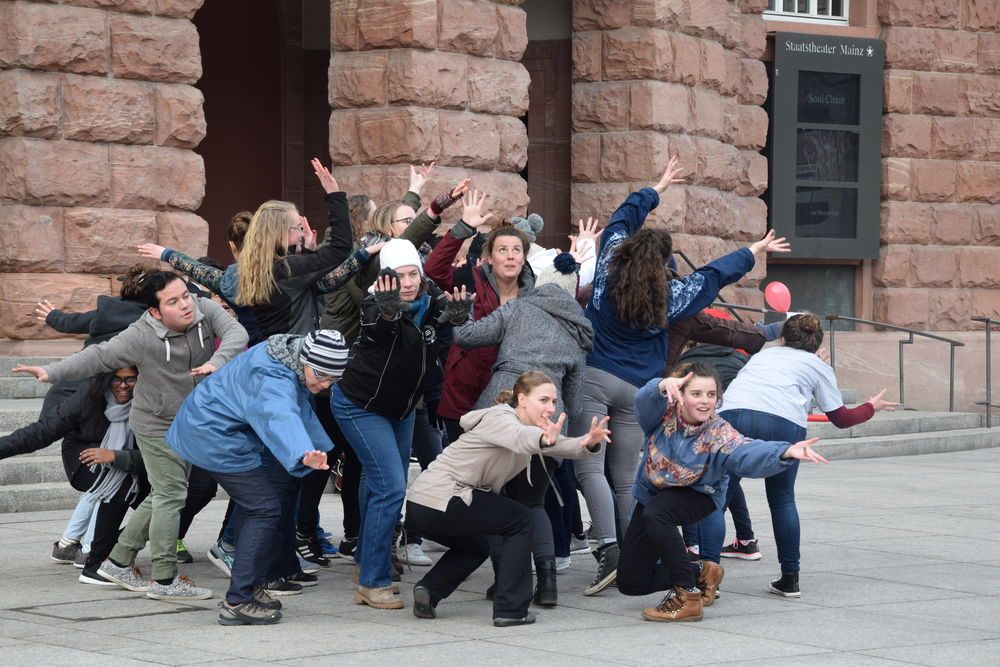 Germany: The entire Riverboat crew went into the city centre for an afternoon of outreach using creative arts, after getting special permission from the local authority to occupy the plaza for a few hours. It was a prayer answered.
Armed with musical instruments, art materials, national flags, a boombox and a puppet, community members walked off the Riverboat in high spirits, drawing attention on the streets.

The entire crew went to the city centre of Mainz, Germany, for an afternoon of outreach using creative arts after getting special permission from the local authority to occupy the plaza for a few hours. It was a prayer answered.

It began with a flashmob made up of over twenty community members, followed by drama and musical performances. Surrounding the centre stage were several stations: an ‘international station’ which showcased the diversity of the crew, a ‘prayer station’, an ‘art station’, a ‘family station’ with ballooning and face painting and a ‘discussion station’ with provoking questions written in chalk on the pavement. The rest of the community members walked around the plaza praying and talking with people.

As the performances repeated for a second time, more people gathered in the plaza and meaningful conversations took place. To community members’ surprise, they met people who spoke their heart language and had an immediate connection with them.

Gyongyi Legradi (Hungary) met a homeless Hungarian couple who have an infant child back in Hungary. “It’s especially hard meeting such people from my home country as I tend to be skeptical. I was at a loss for words, really,” she said, but shared the Gospel with them through the One Wish method, which consists of four pictorial symbols.

Mariana Peres (Brazil) was feeling helpless at the beginning of the outreach due to her inability to speak German. She prayed to God to send someone who spoke Portuguese to her. As she turned around, a woman was standing next to her. “Hi, where are you from?” she asked, to which the woman answered she is from Angola. “You speak Portuguese!” laughed Mariana, joyful at God’s quick response to her prayer request.

Flora Man (Singapore) met a young female student from China who was struggling with the knowledge of God and Christianity while staying loyal to her political party at home. “I know what you are saying but my position doesn’t allow me to believe freely,” she shared in Mandarin. “Maybe someday something will happen in my life that allows this to change.” Althought she was fearful of being too involved, she accepted a prayer from Flora and exchanged contact information to keep in touch.

Matthias Schaller (Germany) talked with a fellow German studying atheism academically. It was difficult discussing Christianity with the man because he could support his argument with seemingly convincing arguments. However, when Matthias prayed for him and asked for God to touch his heart, the man said “yes." “His mind may be strong, but his heart may not be so,” said Matthias.

Jeanie Ough (Australia) approached an older guy who had been prayed for by another community member. “I never expected that in my three days’ stay in Mainz, someone will pray for me and my wife, who is in hospital at the moment,” he shared. “I’m so touched.”

There were other amazing encounters like Melissa Thiessen (Canada) meeting a Canadian, and Leonie Blum meeting a classmate from four years ago that she has not met since then. Ray Strong (Netherlands), who served in the Arabian Peninsula for more than 10 years, prayed to meet an Arab but met a Pakistani that day and invited him to the Riverboat.

The event ended with all the community members coming together, belting out the song ‘Majesty’ that resounded through the plaza. May His majesty and glory be known in Germany and all nations!

Published: Thursday, 01 March 2018
Credit: Flora Man
© 2018 OM International This email address is being protected from spambots. You need JavaScript enabled to view it.