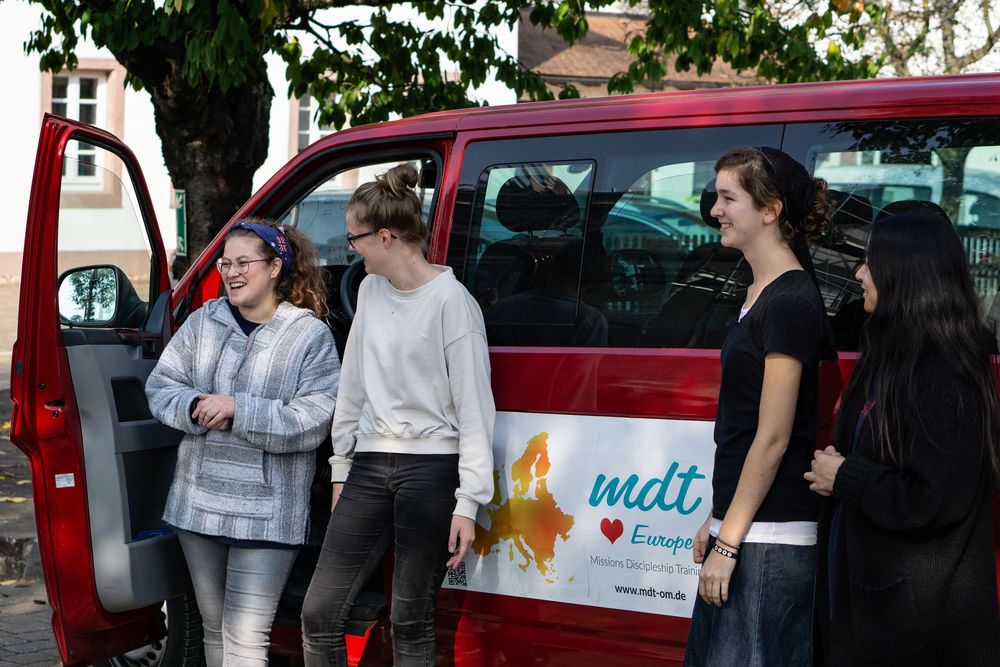 Serbia: Team Alpha, one of the two MDT Love Europe outreach teams 2015
Two vans, eight people and six countries visited to share the love of God in Europe. That summarises this year’s MDT Love Europe! Missions Discipleship Training (MDT) Love Europe is an intensive training experience offered by OM for six months, to equip people for missions and to travel Europe by van. Before heading homewards, the two teams looked back on their time in Serbia, Moldova and Montenegro and shared some of the expirences that impacted them.

“For me, being at the refugee camp in Serbia had some really cool moments, and lots of great conversations. One of the most impacting connections I was able to maintain and deepen over the two weeks [was] with a man who was a Christian. He had to flee Iran because of his faith. He told me his story, and I listened and heard about his harsh past, and his now reality in the refugee camp. I was able to encourage him and chat through some different topics that we could both be encouraged from. We looked at the Bible and what God says about our situations. It was challenging, but cool to see how his faith had drastically changed his life, as he had chosen to follow Jesus over his home, his family and his previous comforts. Crazy, inspiring and challenging to me at the same time!” – Esther (Australia)

“While travelling from one outreach place to the other, we slept one night in a cabin in Serbia. It was quite cold and there was a fireplace to make the living room warm. We stayed warm before we went to bed. But in the morning when I got up, the fire was dead, and it was freezing cold. I tried to put the fire on for almost 40 minutes, and I used all the matches except three. I almost gave up with that thing. I didn’t want to waste more matches. And suddenly, I realiSed that I should pray first before I try to do something. I prayed and used two matches more. There was only one match left. I really couldn’t make a fire. I asked God for a warm morning for our team. I lit a match and dropped [it] into the fireplace. There was no difference from any other tries, but suddenly the woods started to burn! It was an impacting moment to me.” – Yujin (South Korea)

“Our time in Serbia has been very impacting for me. It definitely changed me! I had a lot of highlights in these two weeks. I am thankful for the many good conversations I had, and the stories I was able to listen to. Some of them were really personal. Through that, I was able to show Jesus to them and encourage them. It's hard to find one specific highlight, but I had one conversation where a man shared almost his whole life with me. It got a bit emotional, even for him, but he even told me how he became Christian. That encouraged me so much! These people experienced so many different things. Some of them are having the hope in Jesus, some of them not. But I loved seeing their hearts in that, what they really love and their questions. At the end of this time it was hard for me to say goodbye to that place, because I feel emotionally connected to the people there.” – Tabea (Germany)

“We left the city of Soroca, Moldova, on Monday and began our three days of ‘mission of faith’. So, basically, we had no plans and no arrangements to stay anywhere, just a general area of the least-reached places in Moldova. We spent time praying, and we spent hours driving around a small village, trying to find some Christians by asking people. It was heavily snowing and extremely cold, but we found an old lady who was living in a tiny house with two rooms with her son. She was so excited to have us, but didn’t have any room for us to stay the night so she rang her friend who has a bigger house. Meanwhile, she gave us food (we had to pray the missionary prayer –'Lord I get it down, you keep it down'–for this one). She also gave us compote (a homemade juice, which was actually quite nice) and borrowed some nice cups from the neighbors for us to drink it with. I was at this point feeling very unwell and coming down with the flu, so I was feverish and had achy joints. The lady came with us to her friend's house, but when we got there, the door was locked and the lights were off, pretending not to be home. Our new friend was pretty disappointed, but we prayed for her and took her back to her home and left. We ended up going to our translator’s parent’s house, which was very cozy and homely. Despite being small and no running water, it was a lovely place to stay. So we stayed there each night for our mission of faith, and visited some people in the same village. So we experienced God`s provision every single day of this ‘mission of faith’ outreach.” – Tash (Australia)

“On Thursday we went to a place named ‘Adria Center’ in Bar, Montenegro. They are working with people who are disabled. We had a fun time there, playing games. But even better has been the other two house we visited this day. At both, we were able to share our gifts from God and worship Him through them and it was amazing. We were able to sing songs and have worship together at one house, because the woman there loves music. We reached out through that. We loved singing together, and, of course, I was able to use my guitar a lot in this week. At the other place, we painted and drew pictures that were full of light, color and biblical meaning. After we finished drawing, we gave all [our] pictures to the woman because she really loves art. So, at both places we were able to bless them, even with our gifts and things we are enjoying.

"On Friday we has another house visit and then English Café. At the house visit, we cleaned up a very dirty room which was full of trash. The sad thing is that a woman who is in a wheelchair lives in this room. No one has ever cleaned up her room, and you were definitely able to tell. At English Café, the lesson was on gifts and talents and we helped run it. At the end, the four of us were able to sing two worship songs together. Whilst preparing for this, we were able to bond well as a team. After the lesson, we had a good and deep conversation with a guy. He was curious, and asked us a lot of good questions. The cool part was that we were all able to share our testimonies.

After English Café, we had our debrief with the team leader from Bar about the past week, but also from the whole time in Montenegro. We felt encouraged at the end, because we had a really good time, got involved in the ministry, had good places to stay and people who looked after us. We all love Montenegro. It has been something special!” – Tabea (Germany)

Published: Thursday, 10 January 2019
Credit: OM International
© 2019 OM International This email address is being protected from spambots. You need JavaScript enabled to view it.

Debora from Mexico will soon join OM in Serbia to serve refugees. She's been three times already as a volunteer...what keeps bringing her back?

“This publication is a tool to help those who will join Goran in sharing the gospel among Gurbet-speaking Roma, and lays the foundation for future Christian materials.”