'To the whole world’ 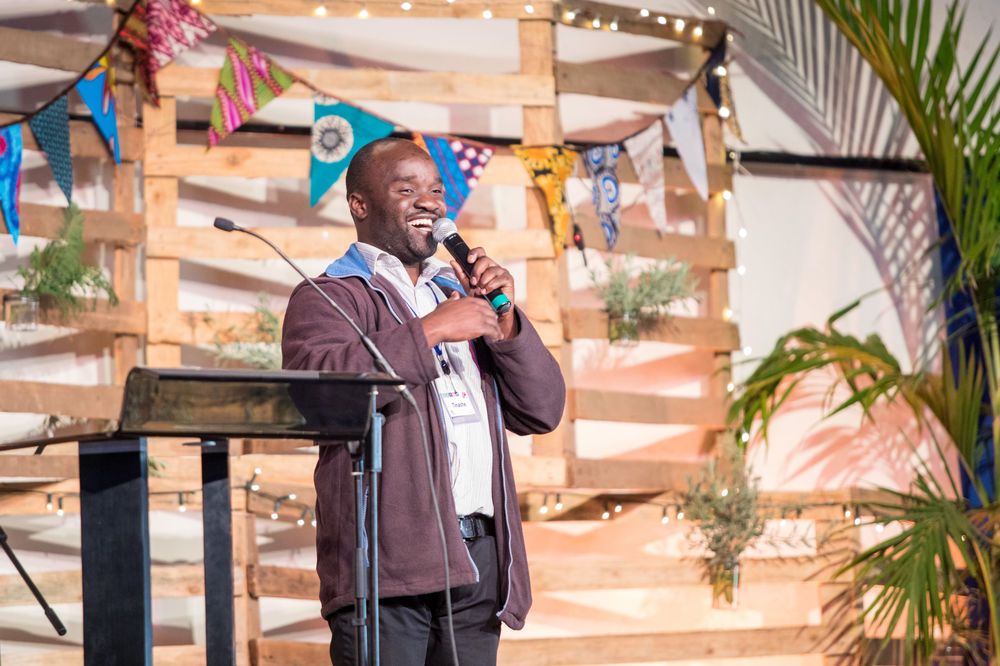 Zimbabwe: Tinashe Mafuta speaks on stage at Love Africa in Zambia. Photo by Rebecca Rempel.
After becoming a Jesus follower, Tinashe Mafuta knew that he was about to embark on a journey of a lifetime.

“I had been resistant to the gospel for a long time,” he recalled. “My brother and my best friend from school had been sharing with me, but it took a promise from God to convince me to follow Him.”

“Growing up, I just wanted to be a loner and was always striving to do things on my own and in my own strength,” explained Tinashe.

While Tinashe knew about the reality of God and the need to have a growing relationship with Him, he kept rejecting God because of bitterness caused by the pain of the relationship breakdown between his father and mother and their subsequent separation.

After his brother who had been into drugs came to faith and started sharing the gospel with him, Tinashe took notice of the change and started to at least consider a personal relationship with Christ. The turning point came when his friend at school, who, like his own brother, had been sharing the gospel with him, explained a Bible passage that assured Tinashe that Christ was the light of life and whoever wanted to walk in light needed to follow His example.

On hearing that—and having seen how his brother’s life had been transformed—Tinashe gained an assurance that God did care for him. From then on, Tinashe desired to share his own story with others.

Working with the church

Tinashe is passionate about seeing the gospel spread not only in Zimbabwe but to the utmost parts of the world. He believes that strong stewardship and discipleship are important for the goal of effective churches and world evangelisation. He works closely with a team to maximize resource use in order to accomplish the goal of motivating, equipping and connecting others to join missions.

“Many people in Zimbabwe are inward-focused about themselves and their church,” Tinashe explained. “There has been a lack of discipleship within churches too. Therefore, I am motivating the church to look beyond itself and pray for nations, give and start discipleship groups.”

Motivating the church to be involved in missions has not been an easy task for Tinashe and his team as they are serving against a background of economic hardship and a prevailing belief that Africans cannot be missionaries. “People think that missionaries are white people who come from Europe or America to build mission stations complete with a school and hospital,” said Tinashe. “So, without resources to accomplish the same, [Zimbabweans] think themselves unworthy of the calling.”

Tinashe has been working hard to disciple and show Zimbabweans that they, too, are called to serve, explaining that one does not need to have many resources or build properties to be a missionary but just needs to be faithful in sharing their own stories with others to show the love of Christ.

“I also used to think missionaries came from Europe and the West,” Tinashe admitted. “However, one day, a missionary came to our church and explained the need for the whole church to take the whole gospel to the whole world.”

From then on, Tinashe’s perspective about missions and missionaries changed, and he desired to correct this misconception by sharing the truth with others.

Through their efforts and God’s grace, the team has seen God raise local people to go and share the gospel in North Africa and the Middle East and to serve onboard the OM ship Logos Hope.

Published: Wednesday, 14 August 2019
Credit: Simon Marijani
© 2019 OM International This email address is being protected from spambots. You need JavaScript enabled to view it.