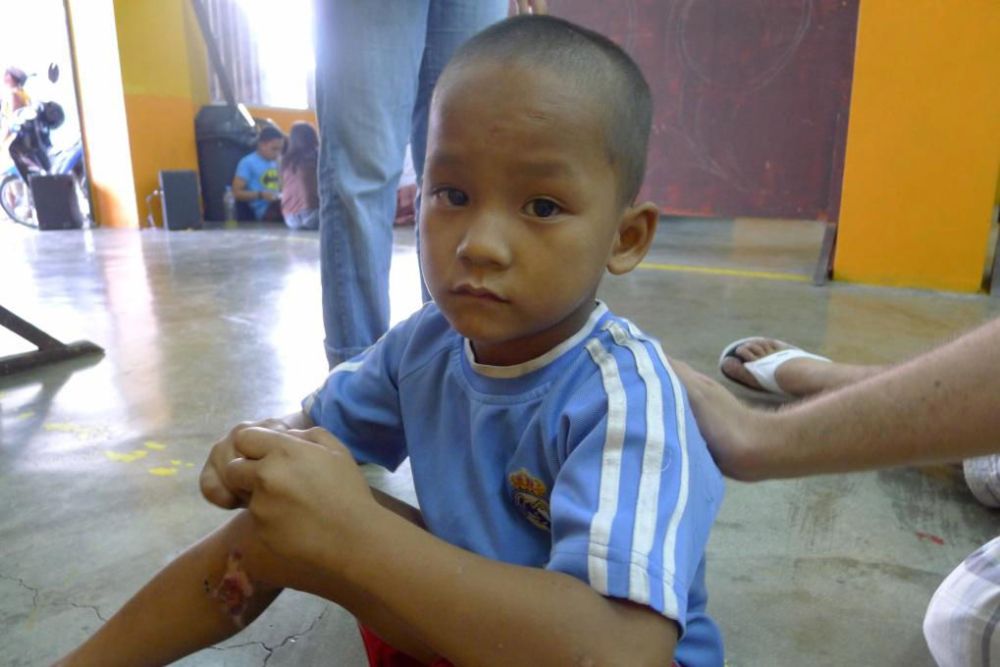 Philippines: While playing table tennis with a street child at the church?s student centre one afternoon, a team member introduced Han to a young boy with a big wound on his left leg.
One of the workers from China is currently serving as a medical doctor on board the OM ship. As the OM ship had to undergo major repairs in dry dock in Subic Bay (Philippines), Han* and his team spent three weeks working with a local church in Pasig City, Manila.

While playing table tennis with a street child at the church’s student centre one afternoon, a team member introduced Han to a sad-looking boy of maybe 5 to 6 years of age. “Pointing to a huge wound on the boy’s left leg, [the team member] asked if it could be treated. Seeing that it was quite serious, I agreed to help cut off the dead skin and disinfect the wound,” reported Han. But when Han brought out the disinfectant and his medical tools, the boy ran away.

“We soon found out that the boy’s wound had been caused by fire inflicted by an adult, and that the boy was thus afraid of any male adult, especially strangers,” continued Han. “Praying that the boy would return, we bought him some snacks. When he returned to the student centre an hour later, we asked a [female] team member from South Korea to comfort him. And after we had given him snacks and prayed for him, he eventually agreed that I could touch his wound.”

Although the debridement (medical removal of dead, damaged, or infected tissue to improve the healing potential of the remaining healthy tissue) had been quite successful, the boy did not return to the student centre that week. Not sure whether the wound had healed or whether the boy had been abused again, Han and his team prayed for him.

Ten days after Han had treated him, the boy returned with a big smile on his face. “He was like a totally different person,” said Han. “But what I was most interested in was his wound. When the boy gladly showed it to me, I was happy to see that a totally new skin had formed over the wound without any infection!” Grateful for the boy’s healing, Han and his team gave thanks to God for hearing their prayers.

Published: Monday, 27 August 2012
Credit: OM International
© 2012 OM International This email address is being protected from spambots. You need JavaScript enabled to view it.

After over 10 years of praying, the Philippines had its first-ever TeenStreet!