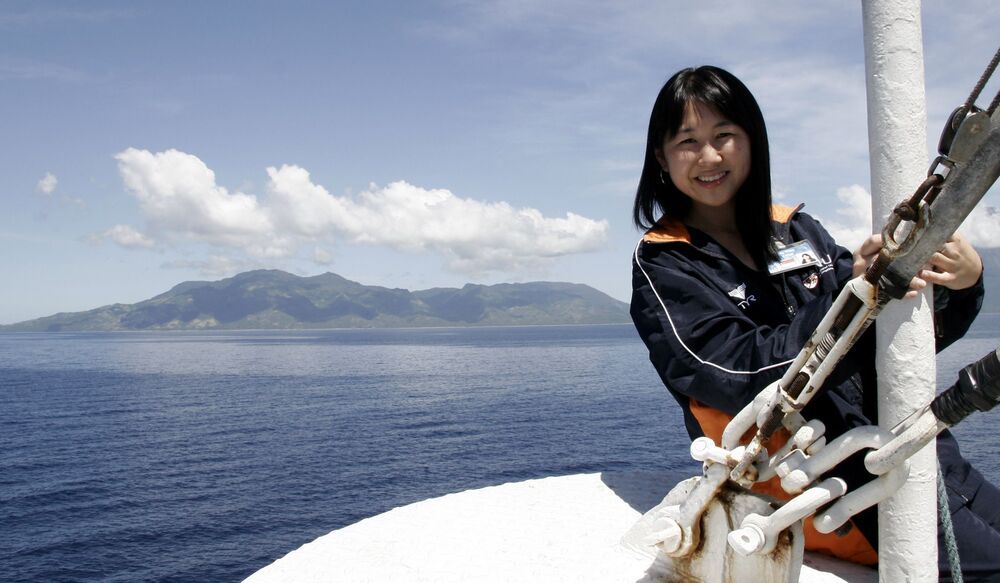 Singapore: Jiamin Choo, from Singapore, at the bow of Doulos on the voyage to the Philippines.
Cebu, Philippines: One evening in 2001, Jiamin Choo struggled down the gangway of the OM ship, Doulos, with two large bags of food waste, headed for the garbage bins. When she reached the bottom, a group of street children living on the docks charged towards her. “I thought they were going to rob me,” she remembers, “but they grabbed the bags and started looking for food. It really broke my heart.”

Jiamin returned to the ship, heated up food and brought it to them. “I watched them eat everything,” she says. “I think that was when God started to give me compassion.”

The Singaporean, then 18, never dreamt that God would call her into missions, let alone aboard a ship of 350 crew members from more than 45 nations. But meeting those street children in the first port-of-call on her two-month stint before university changed her heart. “I cried for the lost for the first time,” she says.

Over the following days, Jiamin became friends with the children and they, with other crew, met every night for full-on kids’ programmes with songs, stories, the gospel and games. She witnessed God change their lives too.

“I felt such joy when two girls prayed with me to receive Christ,” she remembers. “I thought, ‘Wow, God used me? I’m no spiritual giant.’ But God’s power transformed their lives.” The kids’ programmes birthed the work of OM in Cebu, which continues today.

Jiamin soon set her mind on university. “In Singapore, there’s generally one track,” she explains. “Get into top schools, get the best grades, get the best job, make the most money—that’s the good life.”

But she couldn’t ignore a nagging feeling. She had met people onboard with a worldview that challenged hers. “I was blown away by how many young people were involved in missions,” she says, “and not for two months but two years. I didn’t know there could be another way of living.”

As God softened Jiamin’s heart, she joined Campus Crusade for Christ International on short-term trips to Japan annually during her three years at university. “Each time it strengthened my desire to share the gospel,” she says. “It broke my heart to know how many people knew nothing of our hope in Christ or the love they hunger for. I began to anticipate subsequent mission trips.”

Jiamin then realised her next trip would be long-term. “God had changed my heart during those three years.” She shared her decision with her friends, many of whom did not encourage her to go. As the first born in her family, Jiamin felt the unspoken expectation that she would provide financially for her family, especially since her father had passed away eight years earlier and she had two younger siblings.

Jiamin asked her mother if she should go. “If God tells you to go, then go,” she answered. “God had prepared her to release me,” Jiamin smiles. “She says I don’t belong to her but to God, and that life is about obeying God’s call, even if it goes against what society says.”

With her family and church’s blessing, Jiamin boarded the Doulos again, this time in the Middle East. “It was my first port-of-call and God woke me up,” she says. One afternoon, she and other crew members were in the city and walked by a row of shops with shattered windows. They soon learnt that a bomb had just gone off and they quickly made their way back to the ship.

“You're out of Singapore now, Jiamin; this is the real world," she remembers God impressing on her heart. “I realised that our lives were in God's hands. But I saw so much value in the ministry of the ship; my life had changed. The street children’s lives had changed. I wanted to continue to be a part of that.”

During four years on Doulos she visited 31 countries, every night writing in her journal. When she left the ship in 2009, she carried 25 journals full of stories, which two years later she turned into a book, Out of the Harbour.

“I wanted to share these stories with others to let them know that this is the God of the nations,” she says. “The book speaks of God's glory and how He did tremendous things through an average girl like me.

“There’s a saying: ‘A ship is safe in the harbour, but that’s not what ships are for.’ Like ships, we are not meant to stay in the safety of the harbour but to sail the sea—to launch out into the deep—with our heavenly Captain, to reach a destination He has chosen.”

Jiamin currently serves as the missions coordinator with OM Singapore. Her passion is to mobilise young people for missions and she often speaks about God’s work in her life with youth groups and churches.

She hopes God will touch hearts through her book. “These stories belong to God,” concludes Jiamin. “I just happened to record them. God is the author of my life; I’ll just be a witness for Him.”

To read more about Jiamin’s adventures with God aboard Doulos, including her friendship with the street children of Cebu, sharing God’s love with HIV patients in Africa and bringing hope to the lost in Japan, visit www.outoftheharbour.com to order a copy.

Published: Wednesday, 12 December 2012
Credit: Janet Weber
© 2012 OM International This email address is being protected from spambots. You need JavaScript enabled to view it.

21-year-old Noel Cheong shares a heart-warming perspective on how his family played a pivotal role in helping him go on missions with God.