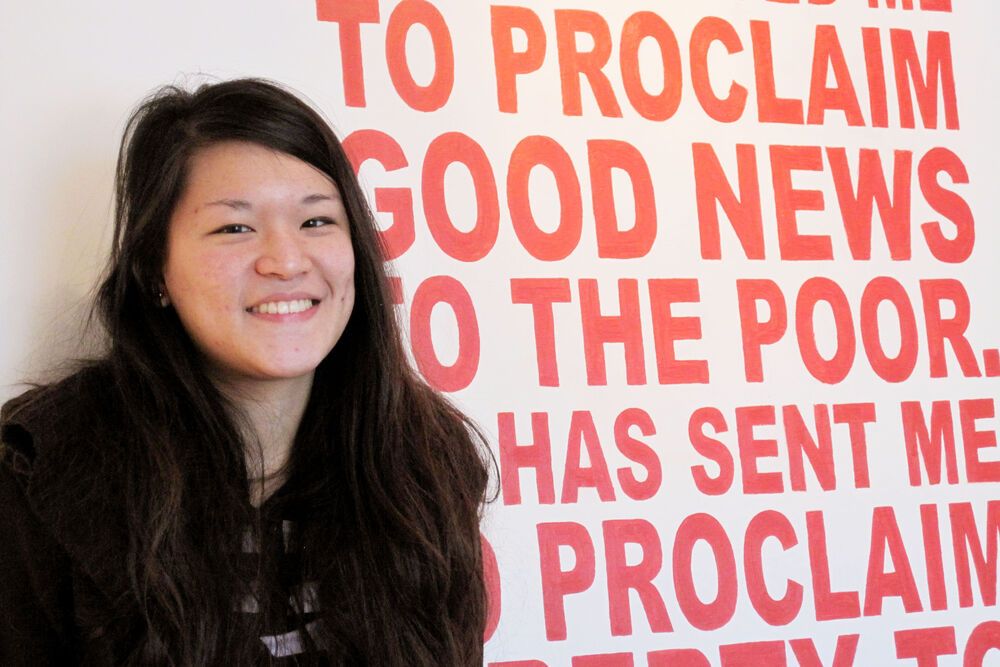 Sweden: Joy Lin shares how the Lord led her through broken dreams from Taiwan to Sweden.
Joy loves life.

Her name in Chinese, Lin Chao Yu, means, "trillions of joys", which always seemed appropriate. Born in Taiwan, she had many friends, did well in school and dreamed of one day becoming a movie director.

In high school she focused on drama. The future seemed bright until her parents announced the family was moving to China. At 15, Joy started to fancy a life without her family. Staying behind and pursuing the dream meant more to her than anything else.

But her pastor shared a picture he had received while praying, an inner vision of beautiful bubbles rising and floating through the air until they all popped and disappeared. The message seemed clear to Joy: “You have plans, but if they're not from God they will pop and disappear like the bubbles.”

Her long struggle ended and she accompanied her parents to China. The move meant separation from friends and drama classes, and struggling with English as she attended an international school. The adjustment was difficult. Soon her spiritual life ran dry.

Watching movies became her escape from culture shock, loneliness and even reality. She pretended to be strong, needing no one. She began reading New Age books and watching strange movies. Eventually art became her idol—the imaginary world became her life, identity and comfort. Nurturing hatred for people and reality, pride and loneliness took over on the inside, while on the outside she pretended to be a good Christian girl. This divided life resulted in horrible nightmares when she slept, disorder and confusion when she was awake. She started hating herself and felt helplessly trapped.

Joy always dreamed big, so when she heard about the ministry of Logos Hope she wanted to be part of it. This was a different reality, a ship full of Christian people and a great escape. Her parents were excited about the opportunity for her to experience the world, as well as learn many other things. University could wait.

Before joining the ship in 2009, Joy spent three and a half months doing missions training in Macau, China. Reading and studying the Bible proved to be another life-changing experience as God spoke to her through His Word. A time of healing began.

“I was fascinated by the different characters I read about in the Bible,” Joy explains, “and one night God made it clear I could become like them. I took a shower, and it felt like a new baptism as the cleansing water flowed over my body. I knew the Holy Spirit was working in my heart and I had to give up certain books, music and movies. It was a struggle, but God won! Over time I surrendered my life to Him in a deeper way. The time in Macau was great training. I learnt so much about missions, which I had never had an interest in before.”

After arriving on the ship in Denmark, Joy prayed, “Please take out everything inside me and make me a blank sheet that you can use.”

God answered in His own way. The first few months on the ship were difficult. She did not know what to think or say, and she felt no passion for anything. With a sense of emptiness, she kept reading her Bible and waiting on the Lord. Before ministry times she spent hours in prayer, often on her knees, in order to be ready.

Finally Joy knew something had changed. She felt different, like God had laid a foundation in her life, resulting in a new passion for Him and for prayer and ministry. While the ship was in the Netherlands, this became very evident to her.

One Sunday—her one day off during the week—she planned to see a famous art gallery recommended by a shipmate. But when a Bible verse previously memorised came to mind about keeping the Sabbath as the Lord’s Day, she knew what she had to do. Instead of the art gallery, she attended the morning service on the ship. Arriving a few minutes late, she walked in while everyone sang, Beautiful One.

“Knowing that God is the beautiful one, more beautiful than anything I used to imagine, even the most famous art gallery, I cried and cried,” Joy shared, recollecting the deep experience.

Through the many changes and challenges, Joy still held on to her dream of becoming a movie director, but this time for God. Imagine her excitement during Pre-Ship Training when she met the ship’s videographer and was invited to his office.

This was the closest she had ever come to movie production, including the camera, computer and other equipment. Soon Joy visited the media office regularly, and before long she helped with small projects. Later, she changed jobs to work full time with the media and video department—another step in the direction of her dream.

Joy felt more at home on Logos Hope. She loved her ministry with the media team, connected with people and knew the Lord was using her and teaching her. As her two-year commitment neared its end, she prayed about the next step.

And even when life feels difficult or lonely, it is possible to experience the 'trillions of joy' God wants to give.

She recalled the first prayer meeting in Macau, when all the new recruits had to pick a paper presenting an area where OM works and pray for it. As Joy chose Northeast Europe, a fleeting thought passed through her mind that this was where she would go after the ship. As Joy looked to the future, the country of Sweden seemed to pop up in front of her everywhere.

She recalled that the very first “test port” for the newly refurbished ship had been a two-day visit to Gothenburg, Sweden. Looking at the OM website to see if there was a need for a video person, OM Sweden was right on top of the list. As she searched for a ministry among Muslims, Joy realised this was also possible in Sweden. Then she heard a Swedish girl pray for God to send missionaries to Sweden to help reach all the immigrants. Joy knew in her heart she was going to be one of the answers to that prayer, but the thought was too big to face.

After all, what could a Chinese girl do in Sweden? She kept praying for God to either confirm His calling or take away the thought.

In October 2010, while the ship was in Malta, a group of Swedish missionaries arrived for a visit. Among them was one Taiwanese lady, who shared how a pastor had supported her decision to stay in Sweden. To Joy, it confirmed the calling in her own heart.

“Being surrounded by all those Swedes diminished my fears,” she shared. “I wrote to OM Sweden—and here I am!”

Joy has now served with OM Sweden for almost two years. In addition to participating in meetings and recruiting for missions, she and other members of the mobilising team are responsible representing OM at various conferences. Joy enjoys contributing her creative ideas and dramatic elements for these projects. With her past experience on the ship, she is also happy to be in touch with Swedes considering joining Logos Hope, and willingly shares about life aboard a ship.

The transition from life on the ship to life in Sweden was not easy, however, and she found the first three months especially difficult. Joy struggled with seeing how many people were dissatisfied with their wealth and high standards of living.

“I thought Swedish people were spoiled," she admits, "and I wondered, 'Why, God, did you not put me in a poor country?'"

It was also a challenge to relate to a more introverted culture. As an Asian, she is used to crowds and loves being with other people, so the hardest thing for her in Sweden is being alone.

"Even sharing an apartment with only two women feels lonely to me," Joy says. "Being with all the people on the ship, rarely alone, is more what I am used to. I realise that I have a big fear of loneliness."

Joy says since this is a problem for many Europeans, she's found many people to visit in the community around the office.

"When I'm alone, I remind myself of God’s presence and the crowds of angels surrounding me," she says. "So I am not really alone! And even when life feels difficult or lonely, it is possible to experience the 'trillions of joy' God wants to give."

Published: Thursday, 06 June 2013
Credit: OM International
© 2013 OM International This email address is being protected from spambots. You need JavaScript enabled to view it. 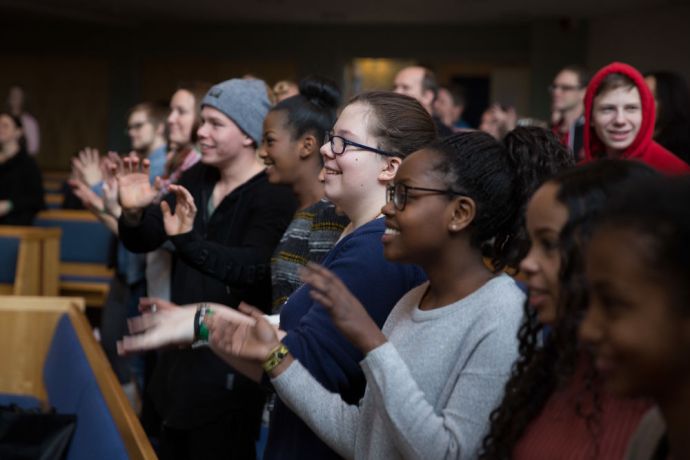 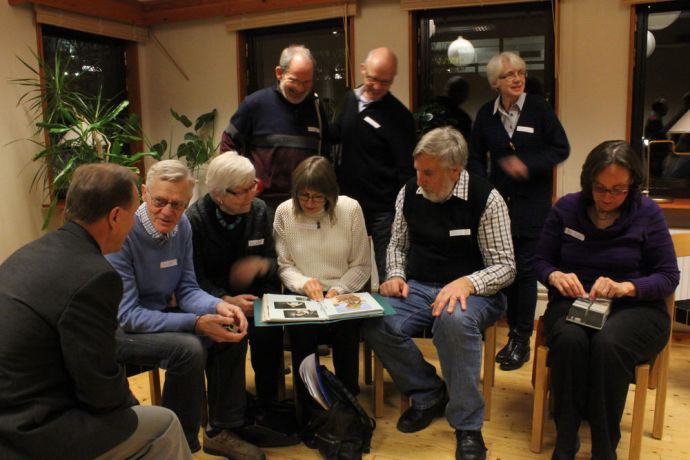