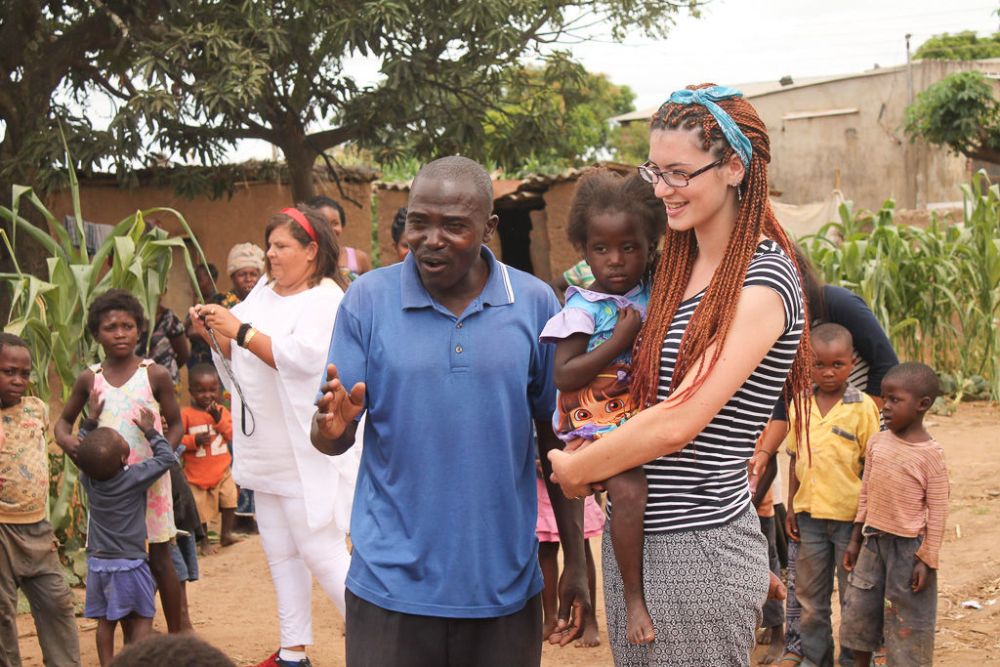 International: Makalulu, Zambia :: Abi Thompson (UK) participating in childrens ministry in a poor community in Zambia.
OM Ships’ Logos Hope has been in Singapore in dry dock for months. During that time, many crew members were sent all over the world to serve with and support OM teams. Now that the ship is nearly ready to relaunch, testimonies are coming in from the Outbound Teams that have returned to the ship.

What does it feel like to be in the midst of poverty yet surrounded by love? Walking through the streets of Zambia’s largest slum community was an experience like no other for one of the Logos Hope Outbound Teams. The 90,000 inhabitants of Makululu live in mud or wooden homes and, on a good day, get two meals of Zambia’s staple food, nshima.

But in the dirt, in the dust, this is where we embrace angels. These children desire nothing more than to be loved. If you have four children quarrelling over who gets to hold your hand, statistically, one of them is likely to be orphaned. Now imagine hundreds of children chasing after you as the van pulls away, and your ministry of singing songs, playing games and telling stories is over. What have you done? How can you change lives in a few moments?

OM Zambia has founded the Mercy House ministry, aiming to transform Makululu from the inside out, touching people’s hearts with a love that only Jesus can bring. It’s easy to daydream about feeding, bathing and clothing each child in an effort to improve their standard of living, but with so many children, this is nearly impossible. We’ve come to realise, though, that the greatest gift is not materialistic—it is simply the love we can show in our behaviour to these precious souls and the treasure we carry, which is knowledge of Christ.

Unlike some shelters that provide a resting place for the night or soup kitchens that provide meals, this shelter was a holistic, live-in community.

“In this community, people live together and take care of one another,” explained Andrew, one of the Outbound Team members sent to serve in Kazakhstan.

What touched Andrew and the whole team working in Kazakhstan most was that homeless individuals who were blessed by this community were taking ownership of the shelter and inviting other homeless people in from the streets. One such person is Rona, a 50-year-old man who soon became good friends with Andrew. Before coming to this shelter, he had spent 10 years on the streets, followed by another 10 in prison.

“The world had given up on him, but God didn’t. The people from the home invited him in, cleaned him up and helped him,” said Andrew.

Today, Rona is the vice-manager of the shelter, and on Saturdays, he leads a team into the suburbs looking for the people living on the streets. Andrew recounted how they would approach homeless people, talk and encourage them, offer them food, and invite them to the shelter:

“‘I was in your situation before,” Rona would say. ‘There are food and beds, if you want to leave this situation.’”

Witnessing how Rona was leading a team and turning his painful past into a blessing for others, Andrew was encouraged.

“Nobody is outside of God’s power,” he said. “Just as He restored Rona, He can restore anybody else.”

Along with her Logos Hope Outbound team, Colleen was doing reconstruction projects in Cebu, Philippines, where Typhoon Yolanda (Haiyan) had destroyed hundreds of people’s homes in November 2013. Every morning, the team would meet with leaders Jim and Flor, and share devotions with the construction workers. One morning, Colleen felt very strongly in her heart that she should share her testimony.

“The Holy Spirit was really calling me to do this,” said Coleen. “The whole time I was sharing, I really felt the presence of God, and everyone was so attentive to every word I said.”

Not only did she give her testimony, but as words flowed from her mouth, the Gospel message was also presented. After encouraging the men to pray, five of them made a decision to follow Christ. Returning home, these five men shared with family and friends the change in their lives, explaining that they are being taught about God at the construction site. The next week, new members joined the team for devotions.

“It was really encouraging to see that they were so filled with the truth to just spread the Word more,” enthused Colleen.

Even the leaders were impressed with the change in the men; Jim shared, “I think they came because of her story. [Devotions] have been going on for months, with this exact same group of guys and no new people. I was just so amazed.”

Pray for the Logos Hope Outbound Team members as they return to life on board the ship. Also pray for the individuals who were touched by the teams all around the world.

Published: Wednesday, 01 April 2015
Credit: OM International
© 2015 OM International This email address is being protected from spambots. You need JavaScript enabled to view it.