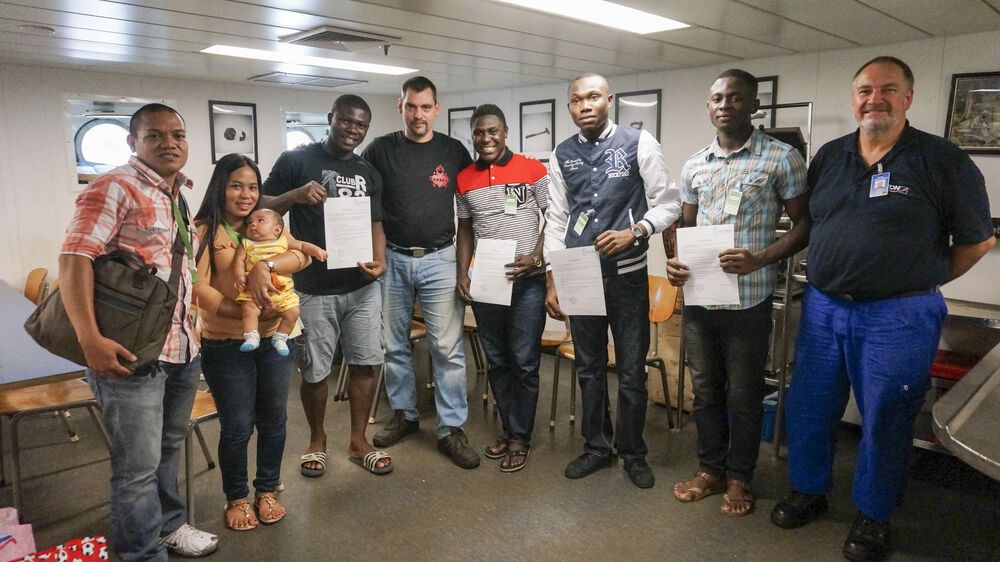 Ships: Cebu, Philippines :: First Engineer Stefan Schomas (Germany - center) with Nigerian maritime students he helped provide practical experience for during the visit to Cebu.
Four Nigerian marine engineering students studying in Cebu, Philippines, stepped onto the gangway of Logos Hope one afternoon and stayed much longer than they expected. Their university professor had suggested that they visit the ship to see if they could receive ‘familiarisation training’ in the engine room. They did, and received far more than they could have wished for.

As part of the Nigerian Seafarers Development Programme to develop more talent to support Nigeria’s large maritime industry, the four students are currently studying marine engineering in the University of Philippines for four years. Having only received theoretical knowledge so far, they have been seeking opportunities to get practical work experience that is needed for their studies.

They were unsure if Logos Hope could help in any way, but one of them had read about the “Crew for a Day” programme in the book fair and wondered if he could work in the engine room for a day. The students were connected with First Engineer Stefan Schomas (Germany), who learnt of their wish and decided to do what he could to help.

Stefan had originally joined the Ship Ministry as a 24-year-old man in the late 90s. Little had he expected that this experience would completely turn his life around. Having completed his apprenticeship as a car mechanic, Stefan joined one of OM’s previous ships, Logos II, and was posted to the engine room for two years. While in the engine room, he was inspired and supported by one of his peers and boss to become a marine engineer.

“He somehow saw something in me that I didn’t see in myself and gave me the confidence to take the step to study in a marine college in Germany,” recalled Stefan.

After Stefan left Logos II and studied marine engineering, he re-joined the ship in 2002 as a qualified marine engineer, starting off as third engineer and eventually becoming first engineer. In 2015, he faithfully answered God’s calling once again and joined Logos Hope, this time with his wife and three children.

“This is my heartbeat. When I saw the four students coming to me to seek opportunities for work experience, I was reminded of myself when I was young,” explained Stefan. “OM Ships carved my career and gave me the encouragement and support to become who I am today. This is why I really want to give back to others and help these students as much as I could.”

After discussing his ideas with the chief engineer and the captain, Stefan managed to arrange for the students to stay for a week on the ship. During this time they received two days of training and five days practice in watch keeping (monitoring the systems in the vessel’s engine room). Thereafter, the students continued to work in the engine room for a few days to help with day-to-day work.

One of the students, 22-year-old Duke Job, could hardly believe it when he found out about the arrangement. “I was so happy but I couldn’t shout, as there were many people around us in the dining room on the ship,” expressed Duke, with a half-laugh. “My classmates were holding my arm as they, too, tried to contain their excitement!”

During the five days of training, the students were assigned to shadow different watch keepers. The watch keepers of Logos Hope not only imparted their knowledge but also reinforced their own understanding at the same time and learnt how to train others. With a changeover of manpower on Logos Hope every six months, the ability to train others is vital.

“I really learnt a lot from the watch keepers. When they are doing something, they asked me if I know the reason why and explained patiently to me,” shared another student, 24-year-old John Omokete. “I now understand the real principles behind the machinery in the engine room and how it works.”

The result is a win-win situation, where both the students and Logos Hope watch keepers gained something.

“We have nothing to lose but everything to gain,” said Stefan. “It’s a ministry in itself to connect with these students.”

He explained that he wants these students to also experience how people work together harmoniously on Logos Hope. Typically, in commercial sailing, there are many levels of hierarchy, and people at the top sometimes treat others badly. Stefan hopes that these students will be role models to others in the future and respect those who work below them.

“It’s the kindness that really touches me. You don’t get this anywhere else. It’s a very different situation on commercial ships,” said John. Through this experience, the four students have gained not only knowledge related to their profession, but their perspectives on life have been altered significantly as well.

For John, his life purpose has been transformed. “I have changed my mentality after talking to the people here on board. They told me that they want to use their life to serve in God’s ministry and help others. I realised I’m really selfish,” he reflected. “I used to think only about myself and wanted God to help me find a good job and earn good money.”

“Instead, the people here want to use their skills to serve others and serve God. Human investment is the most important thing, and Logos Hope is doing that. I hope someday I can do the same,” John concluded.

Another student, 24-year-old Festus Itimi, quoted a verse from the Bible: “To whom much is given, of much will be required” (Luke 12:48). Festus hopes to return to Logos Hope after he graduates to serve on board and make use of his skills to contribute to the lives of others and participate in spreading the Gospel.

In fact, all four students expressed interest in returning to Logos Hope after their studies to serve.

“I see love and unity all around this Ship. There is true joy and peace here. Just look around the dining room and you can see for yourself. I’m definitely coming back,” said Duke.

Their greatest gratitude is still towards Stefan, who constantly encouraged them and gave them advice, related to both work and personal matters, whenever he could. This experience was made possible because of his determination to help.

The heartbeat of First Engineer Stefan has opened the eyes of these students to recognise the truly important things in life. They may become the essential engineers that Logos Hope will need in the future, as vital to the Ship Ministry as the engineers needed currently. Stefan also has plans to engage other institutions in future ports-of-call to connect with other aspiring marine engineers and play a part in guiding their paths ahead.

Pray that the blessings that are passed on will keep multiplying and bear fruit for the glory of God in these lives and the many others who cross paths with the ministry of Logos Hope every day.

For more information about the ministry of OM Ships, please visit www.omships.org.

Published: Tuesday, 30 June 2015
Credit: Flora Man
© 2015 OM International This email address is being protected from spambots. You need JavaScript enabled to view it.