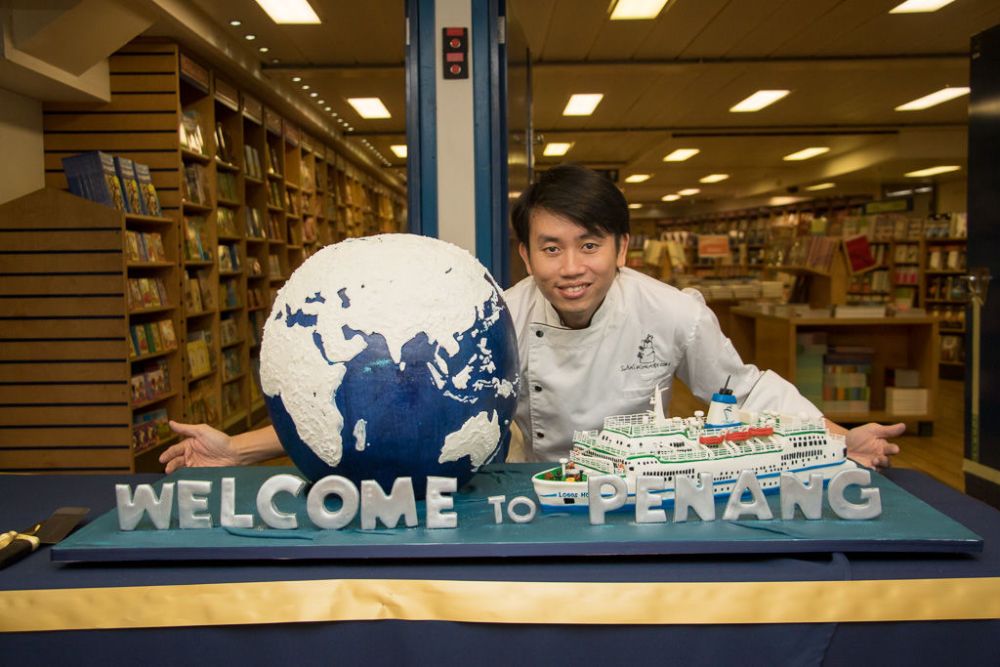 Ships: Penang, Malaysia :: Swens Wong and the cake he designed and created as a donation to Logos Hope for the onboard event Official Opening.
“If this God created everything in this world, from animals to the galaxy, he must be a creative God,” thought Swens Wong, a former port volunteer on Logos Hope from Malaysia.

The thought went through Swens’ mind as he read the book of Genesis for the first time. It was at a point in his life when he was struggling to build his bakery business and was barely surviving in his finances. As he read the first chapter of Genesis, he was awestruck by how creative God was when He created the world. He too, wanted that creativity and started to pray to ask God for it.

As a child, Swens suffered from slight autism and was told by fortune tellers that he was “nothing but a dumb piece of rock”. Coming from a humble family background and having lost his parents at a tender age, Swens began working part time at the age of 10 in various odd jobs. At age 20, he became associated with baking through an apprenticeship in a bakery shop, without knowing anything about the trade. He left the trade after a year but returned when he was encouraged by friends who saw his potential.

Swens started a bakery with his wife, but life was hard. They earned only 500 Ringgit (approximately 100 euros) per month, which was hardly sufficient to sustain his family. At one point, he was unable to pay for the rent of his apartment and couldn’t purchase milk powder for his daughter. Swens started to look for quick ways to make money.

Swen’s wife, who became a follower of Jesus around that time, encouraged him to focus on improving his baking skills. She introduced the Christian faith to him and showed him the saving grace and true hope in life: Jesus Christ. Seeing no better options, he persevered in his business and learned about God.

"I prayed fervently, every day, while I continued to experiment with different baking techniques and recipes," shared Swens. "Nothing was improving but I did not give up, as it was my only hope left. I kept praying and asked God for help."

After waiting patiently for six months, Swens began to gain inspiration on how he could stand out from the crowd. Years of relentless effort led him to discover the secret of making the perfect icing, and so birthed his first-ever 3D-model cake. The popularity of his cakes climbed, and orders increased steadily. Swens and his cakes began to appear in numerous media reports and are now known widely in Penang.

He remains firm that none of his success would be possible without the inspirations and creativity that was given from God.

"My desire is not to grow the business as big as possible," explained Swens. "I just want to have a comfortable place where my family and I can create beautiful cakes together. For the rest of my time, I want to dedicate to helping in church and doing ministry."

Because of Swens’ perseverance in following Jesus, his life regained hope and light.

"Though I was told that I’m a dumb piece of rock with no future, God revealed to me that I was the precious stone hidden in the rock," said Swens with assurance. He never thought he would be capable of baking and designing such artistic cakes, but God gave him the talent to do so, and he has been telling people of God’s work in his life.

In 2011 when Logos Hope visited Penang, Swens became a port volunteer and worked on board as a baker. To welcome the ship’s arrival, Swens baked a giant cake—a replica of Logos Hope—which wowed crewmembers and local guests and was a highlight at the official opening. Swens explained that a cake that size would easily cost more than 10,000 Ringgit (approximately 2,100 Euros) if sold.

During his time as a volunteer, Swens not only learnt new things about baking, especially when it came to bread, but he also witnessed how people from different nations came together and prayed for other nations.

"I was touched by how people would care about another nation and its people living so far away from them," shared Swens. "Their love for others moved me and taught me something new."

When Logos Hope returned to Penang in 2015, Swens gifted the ship with another of his works of art—an exquisitely-designed cake consisting of a globe and a smaller replica of Logos Hope. He visited the ship many times during her stay in Penang and actively shared the hope he has found in his life with people he met. He also brought many friends to attend the on-board events.

Swens was impacted by the loving community on Logos Hope four years ago. Now he continues to ignite others’ passion, giving glory to God.

Please pray that Swens will continue to touch others’ lives through his story and bring hope to many. Pray too that the ministry of Logos Hope will make a difference in people’s lives in ports-of-call around the world.

For more information about the ministry of OM Ships, visit www.omships.org.

Published: Wednesday, 04 November 2015
Credit: Flora Man
© 2015 OM International This email address is being protected from spambots. You need JavaScript enabled to view it.