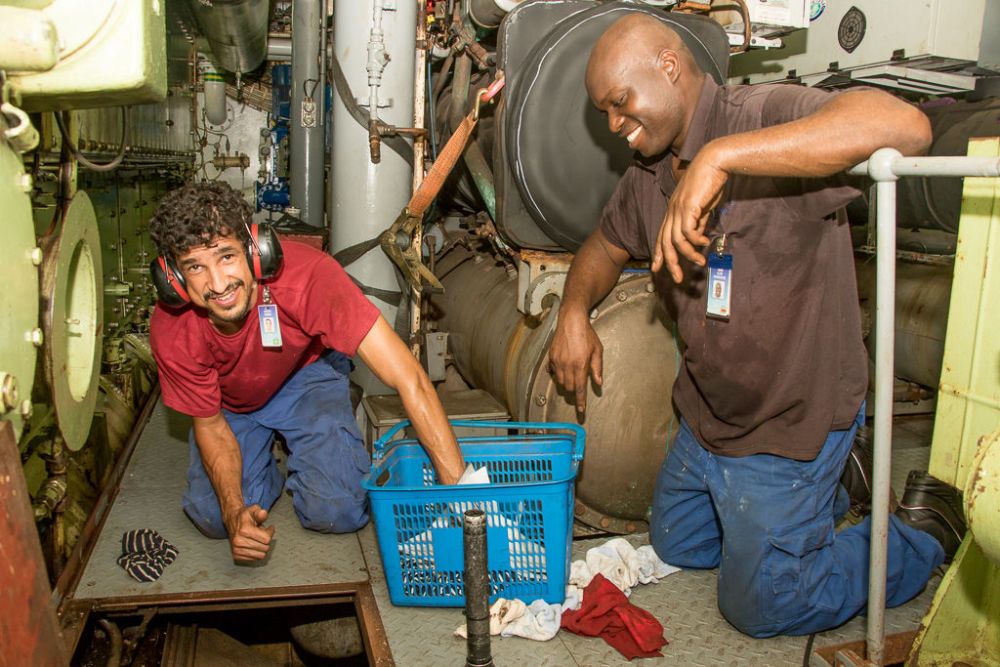 Ships: Yangon, Myanmar :: Carlos Sabino (Brazil) and Clive Musendami (Zimbabwe) work in the engine department onboard Logos Hope.
On Tuesday, 29 March 2016, former Logos Hope crewmember Clive Musendami (Zimbabwe) was promoted to heaven after returning to Harare, Zimbabwe as a result of kidney failure. His time on board Logos Hope came to an end after he was hospitalised during the visit to Dar es Salaam, Tanzania.

“Clive has significantly impacted many on board Logos Hope,” shared Logos Hope Director Seelan Govender (South Africa). “He was a man of few words but of great depth in character and godliness. I have been privileged to meet and serve alongside him.”

Clive began his service with OM through the Mission Discipleship Training (MDT) with OM Zimbabwe before joining Logos Hope in Hong Kong in January 2014. During his time on board, Clive served with the engine room team first and more recently became one of the volunteer coordinators. Clive’s friendliness blessed those he encountered in many different ways. His happy smiling face and gentle nature endeared him to everyone and will be lasting memories for many of those who met him.

The Musendami family are grateful to the wider OM family for the assistance rendered to Clive during his time of sickness in Tanzania, in Zimbabwe and until the time he was called home.

Published: Thursday, 05 May 2016
Credit: OM International
© 2016 OM International This email address is being protected from spambots. You need JavaScript enabled to view it.