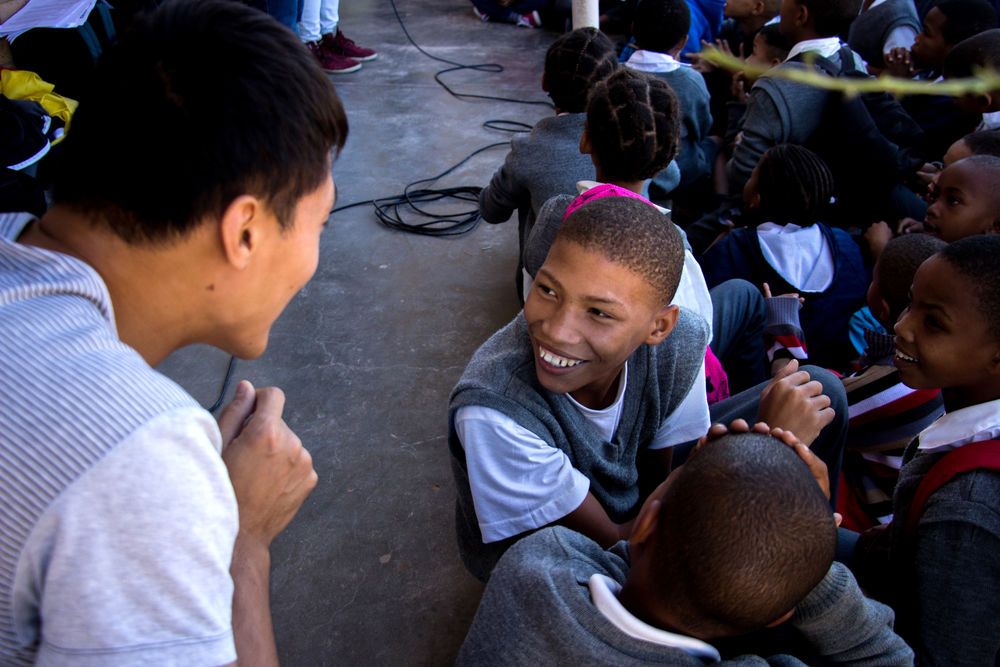 Ships: Klawer, South Africa :: Timmy (Central Asia) shares about Gods fatherly love with school children in South Africa with his challenge team while the ship is in dry dock.
In April 2016, Logos Hope crewmembers travelled to over 30 different destinations around the world and spent a month away from their floating home - involving themselves in presentations of the ship, church mobilisation, practical work and other ministry projects with children, youth and churches. Crewmembers appreciated the little hiatus away from the busyness of the ship and the opportunity to fully focus on connecting with people. Through this time, lives have been impacted – some heard the Gospel for the first time, while others were mobilised to be messengers of hope to others. Here are some stories of what happened.

A youth gathering that ended with all the youths falling on their knees to receive God's love into their hearts afresh revealed the needs of the people to crewmembers – people in need of a true and unfailing love.

The challenge team in Klawer, Cape West of South Africa, has been spending time with children and youths, many of whom battle with serious family issues. The problems continue in a vicious cycle as the children grow up and follow in the footsteps of their fathers, committing the same mistakes in their own families.

In a school that the team visited, about 90% of the children are growing up without a proper father figure in their lives. With that knowledge, the team planned a programme centred around the love of God, whom they can call upon as their own Father. The 'Father's love letter', a letter comprising of different Bible verses, was read to the children and ended with the invitation - “Will you be my child?” Some children, even the five-year-olds, were teary-eyed at the end as they learnt that despite the disappointments from their earthly fathers, they have an eternal hope in a heavenly Father.

More than a street corner

20 homeless people crowded around a small table and two candles in a street corner to study the word of God. The team partnering with Northway Community Church in Durban, South Africa, had the privilege to witness this incredible sight.

A young man, homeless himself, was sharing a message on the body of Christ. Ingrid Mutseyekwa (Zimbabwe) was amazed that someone who had no roof over his head, who didn’t know when or where he would get his next meal, could have such faith and hope in Jesus. She struck up a conversation with the young man and was surprised to find out that he too, was from Zimbabwe.

“I left Zimbabwe three years ago, I came to look for a job but instead I found Jesus,” shared the young man. “Many people look at us and feel sorry for us, but we are at peace as we know that God has put us in this place for a season to teach us something, and we have never experienced God so strongly before.”

In this street corner, the homeless praise and worship God. They wake up in the wee hours of the night and pray to God, something that even those with proper homes do not do.

“I want to know God. Who is God?” asked a teenage girl living in a hostel called ‘Esther’s House’ where the Logos Hope team in Lesotho was ministering. ‘Esther’s House’ houses girls coming from difficult backgrounds and broken families and provides them with the opportunity to attend school and grow in their relationship with Jesus.

Every morning, the team did devotions with around 40 of these girls and answered the many perplexing questions they had. With this question, the team looked into the attributes of God through various Bible passages and helped the girls gain more understanding about who God is.

Published: Thursday, 30 June 2016
Credit: OM International
© 2016 OM International This email address is being protected from spambots. You need JavaScript enabled to view it.