Fishers of men in the dockyard 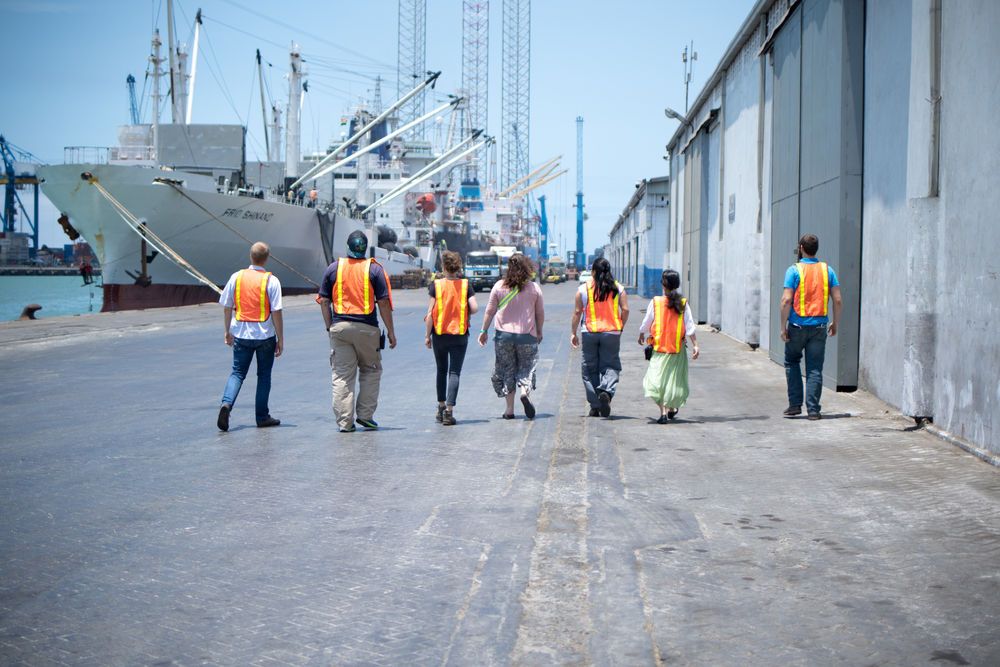 Ghana: Tema, Ghana :: Logos Hopes crewmembers walk through the Tema port to visit other ships.
Reaching out to fellow seafarers is something God has placed on the hearts of several people aboard Logos Hope. A team joined chaplains from the Sailors’ Society and Seafarers’ Care mission in Tema’s busy dockyard.

Other vessels had noticed the ‘nice white ship’ and wanted to know more about its purpose. Hearing that she sails with crew from 60 different nations who may not see their families for two years impressed the captains – but they were left speechless by the fact that no one on board gets paid!

One Ukrainian sailor approached the team to say, in broken English, “Since 10 years I have Jesus in my heart. I am happy.” The man, named Sasha, shared his struggle to witness to younger sailors who enjoy the things of the world. The group was prompted to return with a gift of devotional books for Sasha and an encouraging card, written by a Ukrainian serving on Logos Hope.

“You sometimes have an image of seafarers, because it’s an intimidating environment,” says Elisa Leuenberger (Switzerland), who works in Logos Hope’s engine department. “It was great to see them being so friendly towards us.” She continues, “Container ships seem so vast and hard to access, but inside them, there are just 20 bored people a long way from home. Our ship might have someone who can speak their language or remind them of home.”

Initial contact led to repeat visits, with Indians and Sri Lankans from one vessel taking up the offer of a tour of Logos Hope, then inviting a party to join them for lunch the following day. The Sikh captain accepted Gospel booklets and prayer before departing Ghana, to cross the Atlantic.

Connecting with other ships appealed to Ester Hansen (Brazil), who has previously worked as an oceanographer. “Sailors are kind of an unreached people,” she says. “They need Jesus and it may be easier to talk to them in this way than if we were in their own countries. They can also spread the word as they travel.”

The outreach may become a more permanent ‘passion group’, or free-time activity, for Logos Hope's community. In honour of the access point found in the side of many ships, the current leading nickname is 'shell-door to shell-door ministry'.

Published: Tuesday, 20 September 2016
Credit: OM International
© 2016 OM International This email address is being protected from spambots. You need JavaScript enabled to view it.