The next ship project 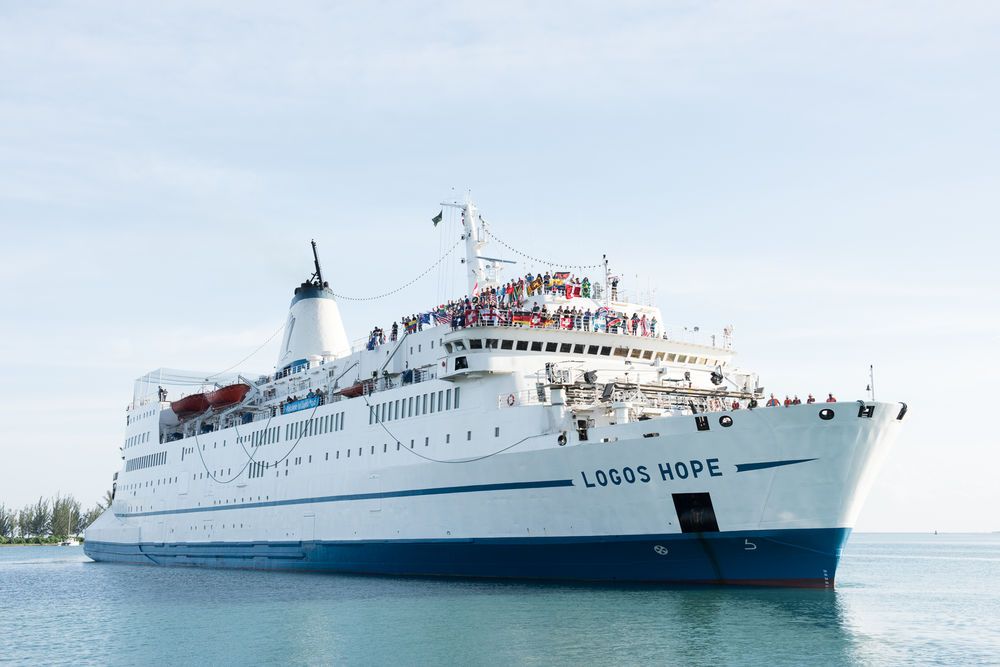 Faroe Is.: Montego Bay, Jamaica :: Crewmembers line the decks and wave their national flags as Logos Hope arrives at the berth in Montego Bay.
Logos Hope is the fourth OM ship, and plans began to take shape for her in 2003 when previous ships Doulos and Logos II were still in service. “We had a mission statement in mind: ‘every one in a million’,” shares Myles Toews, director of financial development for OM Ships. “The annual average of visitors to OM’s ships was one million, but there were limitations to impact all of them,” he shares, explaining the mission statement. “There was an idea of better stewardship that we should offer more for these people who visit our ship.”

With that in mind, the future ship would need a special design: A whole deck for visitors to experience the greatness of God. There would be a proper introduction, exhibitions, a theatre and a book fair. While walking through that deck, every visitor would have opportunity to take at least one step closer to Jesus.

So strong was this vision that the ship was named before it was even found. From nearly 200 suggested names, Logos Hope was chosen after prayer and discussion. “The name embraces the purpose and vision of the Ship Ministry,” wrote former OM Ships Managing Director Bernd Guelker in a 2003 newsletter.

Before determining the right vessel, information on 180 potentially suitable ships was gathered from all over the world. On a narrowed list of 38 ships, one rose above others—an ocean ferry, Norröna I, from the Faroe Islands. “It was perfect, but the price was too high and there were many other buyers,” Myles says. “It was all in God’s hands. Even though two other companies tried to buy Norröna I, something always came up to end negotiations.”

After the ship came back on the market for a second time, OM Ships held an international day of prayer on 29 March 2004 and then confirmed the proposal to buy. On 19 April, the ship was purchased for 3.6 million euros. The vessel was then sailed south from Denmark to a shipyard in Croatia to be transformed for ministry use.

Funding Logos Hope was a great learning experience. “The Lord used many supporters to give us the courage to move forwards. Later, He even slowed the work at the shipyard when we didn’t have enough money to pay for renovations,” Myles shared.

From empowerment to commitment

For the previous 20 years, this 12,000-tonne ferry sailed between the Faroe Islands and Denmark, Iceland, Norway and the Shetland Islands—basically every Faroese had sailed on it. Many people in the Faroe Islands with a strong Christian faith supported the purchase and were happy that their ship would be now bringing good news to people around the world.

“Christians on the Faroe Islands took an enormous responsibility for the ship. They said that they will take care of the refurbishment of the ship’s bridge. They sent workers, purchased a lot of equipment and raised money,” Myles says.

This empowering influence of the Faroese didn’t end with the purchase and refurbishment of Logos Hope. Initially, there had been only one OM representative on the islands; since then, a Faroese OM team has established its place and hosted annual Logos Hope-themed mission weeks. Recently, they sent one of the largest groups to the TeenStreet youth conference in Germany.

In 2016, the mission week in October was filled with church events, Logos Hope alumni meetings and visits to partnering companies. The local Christian radio station featured Logos Hope Week in its programming every day, morning and evening, for the whole week. Many partnering companies in the Faroe Islands are fishing companies and, for them, OM gave a unique opportunity to participate in ministry. Companies and individuals signed a contract with a local fuel company to be invoiced directly for an amount of fuel they want to put in Logos Hope’s tanks.

Support for the Ship Ministry from this small country is empowering for others. “What is accomplished here is remarkable,” says Myles. “There is no other country where everybody knows what it takes to sail the seas.”

Tatu Kekkonen is a journalist and creative artist from Finland. Through everything he does, he wants to keep reflecting the Creator.

Published: Wednesday, 02 August 2017
Credit: Tatu Kekkonen
© 2017 OM International This email address is being protected from spambots. You need JavaScript enabled to view it.

Bringing the Gospel from the North

Photos from Faroe Is.

More Stories from Faroe Is.