On this rock (or from this dock) churches founded 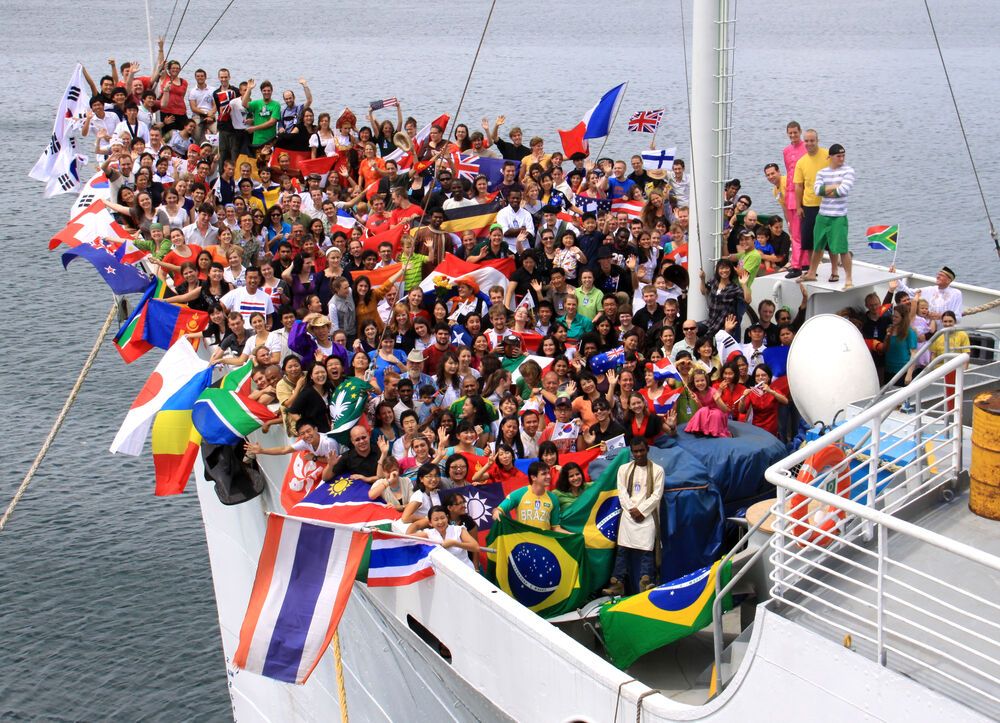 Ships: The 320 international volunteers who made up the final crew of MV Doulos. Doulos was decommissioned after 32 years as an OM ship, but the ministrys impact carries on through churches which were planted around the world.
Partnering with the Christian community ‘on the ground’ is key in planning outreach and understanding an area. OM Ships has always worked to encourage and equip local fellowships—which often receive new believers to disciple, or see existing members’ faith strengthened in the wake of a vessel’s visit.

But there may not have been an established local church to follow up the work. New Christians have started their own in some places; in others, believers have felt called to plant more—either in their own communities or further afield.

The Ship Ministry’s impact is hard to quantify from a distance, over four decades. What is known is that the Holy Spirit has continued the ripple effect around the world after the ships have sailed on, and there are many encouraging stories of fellowships being founded as a result.

A Logos visit to India in 1979 led to a new church named in its honour. The port of Visakhapatnam and surrounding areas eventually saw more than 50 churches established through the momentum generated by both Logos and Doulos in the 1980s.

Northeast of Visakhapatnam, the gospel touched the slum village of Arilova when Doulos’ evangelism director, Daniel Chae (South Korea), was involved in the birth of a fellowship in a tent, named Emmanuel Church, in January 1988. He made a return trip 14 years later, reuniting with the brother in Christ who had taken on the ministry.

“How I longed to see Pastor Vincent Edwin!” Daniel recalled. “When we hugged each other at the airport, we had tears in our eyes. Vincent gave up his well-paid job with the harbour authorities to carry on the evangelistic ministry we had started. Under his excellent leadership in Arilova, many more churches had been planted. I heard there were 3,000 believers and 65 churches in what was now a town of 10,000 people—and all were in good spirit and unity, despite their extreme poverty.”

A pastor in South Korea was moved to form a mission board to support the work in Visakhapatnam province. Gloria Emmanuel Ministry has prayerfully and practically enabled the planting of many churches, and has helped pastors' children with scholarships.

During his trip in 2002, Daniel Chae also revisited Galle, Sri Lanka, where he had been with Logos. He was able to reconnect with those he’d trained on a leadership course and were now in full-time Christian ministries.

“We visited outpost churches in villages where I had led outreach teams 20 years previously. What a joy it was for me to preach in churches which had started soon after the ship left!”

Daniel thanked God for more than 30 fellowships that had sprung up in the city and hill country, under the Smyrna Church banner. “We did very small things, then the Lord has done marvellous things through the faithful brothers and sisters in these countries,” he reported.

In West Africa, Doulos crewmembers saw a small gathering form within a month in an impoverished fishing village in Togo in 1986. After pointing two fishermen to Christ, the ship welcomed them to daily Bible studies. The fishermen started a prayer group and held outreach services for their neighbours. Before the ship visit ended, four new believers were baptised. The men refused to be thwarted when they tried to give their new friends on the ship a send-off. When the port guards denied them entry, the fishermen paddled alongside the departing Doulos in canoes to wave goodbye!

OM Ships has seen not just churches, but charities and other Christian initiatives launched as people have responded to God’s call. In 2004, a Doulos team helped at a home for abandoned children in Tiranë, Albania, whose founder had been challenged to do something for the Lord at a meeting on board Doulos in Grangemouth, Scotland, 20 years earlier.

The ships have also been a lifeline in bringing believers together. During Logos II’s time in Montenegro in 2007, only two Christians were known of in Kotor, a town of 25,000 people. Within two weeks, the crew had encountered several others living in spiritual isolation, unaware of other local believers. Logos II connected nine followers of Christ and advised them how to start a congregation.

Those who have been spurred into action after exposure to the Ship Ministry aren’t all external groups and individuals. Hundreds of OMers have discovered that their gap year or initial period of mission on board has served as foundational preparation for the lifetime God had planned for them in His service.

The full depths cannot be plumbed. Logos Hope’s crewmembers were reminded of that recently, by a Nigerian Christian leader who had volunteered on board when Logos called in his country in 1977. Pastor Ezekiel Odeyemi made a special journey across Cameroon with a financial gift for the Ship Ministry, which had inspired him to build up his own library and deepen his knowledge of God. He went on to start a church movement, which has spread to seven countries. Pastor Ezekiel encouraged the current Logos Hope crew that, while they may not be able to see the immediate results of their work for the Lord, from his own experience a long-term impact would be made for the kingdom.

Only heaven holds the inventory.

“Jesus did many other things as well. If every one of them were written down, I suppose that even the whole world would not have room for the books that would be written.” - John 21:25 (NIV).

Published: Monday, 27 March 2017
Credit: Julie Knox
© 2017 OM International This email address is being protected from spambots. You need JavaScript enabled to view it.