Doulos: a platform for peace in Papua New Guinea 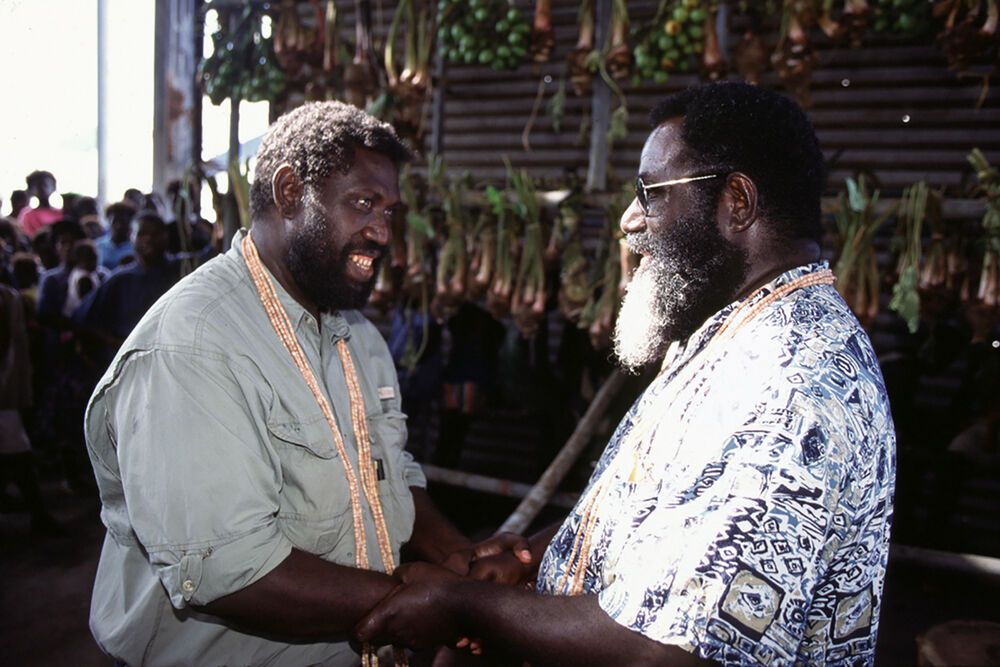 Ships: President Joseph Kabui (right) shaking hands with Joseph Watawi as opposing sides reconcile during Doulos visit to Bougainville
As Doulos sailed towards the Papua New Guinean island of Bougainville in September 1999, her crewmembers felt undercurrents of trepidation for a place where a ceasefire had only recently been declared after a decade-long civil war.

Destruction was widespread with burnt-out villages swallowed by jungle and previously-thriving businesses now rubble. Issues that led the Bougainville Revolutionary Army to fight for independence had not been fully resolved, but there was a delicate peace, a governing structure, and an invitation for OM’s Ship Ministry to return.

Captain Graeme Bird (New Zealand) charted his course warily. The harbour was a minefield of hazards. No international vessel had moored in the port of Kieta since Doulos departed nine and a half years earlier. Every navigation light was broken. The wharf had not been serviced and the water had become a dumping ground for all manner of debris, including vehicles.

The ship had, in fact, been there as the conflict began. In January 1990, a day before Doulos was due alongside, permission for all ministry activities was revoked as violence escalated. An exceptional solution was found, with the vessel’s lifeboats acting as water taxis to ferry Bougainvilleans to the ship at anchor. Many people gave their lives to Christ as they heard the gospel on board.

David Short (UK), a Ship Ministry stalwart who’d previously worked in Papua New Guinea, was helping the advance preparation team. In a café in Kieta, he noticed a smart-looking gentleman eating his evening meal. When David told the diner about Doulos, the man introduced himself as Joseph Kabui, president of the Bougainville People’s Congress and interim leader of the island. He invited the ship’s representatives to his office the following morning.

The next day, President Kabui presented two requests. First, would Doulos hold a seminar on prayer for Bougainville’s new leaders; and second, could its politicians have training in good governing principles?

“I couldn’t believe it!” recalls David. “Of course, this has happened many times—meeting the right person at the right time. God was very much guiding and directing…a leader doesn’t normally ask those sorts of questions!”

Doulos Director Lloyd Nicholas (Australia) flexed the programme as the Lord led. He and the chief engineer were the main speakers at a three-day leadership seminar and recalls, "The leaders of the two factions each came with about 30 of their senior people. They sat separately from one another and did not interact much. Then on the third day, delegates who’d been rivals—even enemies in combat—publicly released their bitterness and sought forgiveness from one another."

A former commercial pilot had disembarked from the ship the previous day to find a man waiting for him. He recognised him immediately as the person who, during the crisis, had dragged him from his plane and forced him to watch it burn. Now, a decade later, that man had waited all day to find the pilot and apologise for his actions.

The vice president of the Bougainville People’s Congress felt God speak to him on the ship, as he observed those on board. As a new believer, he recommitted to his responsibilities to be a faithful husband and leader of his family first, before leading the population effectively.

More people were moved to share their hearts. President Joseph Kabui repented of things said and done. The leader of the opposing faction responded with his own sincere apologies. Men rose from their chairs to stand behind their respective leader. The two lines approached each other in turn, shaking hands, shedding tears and embracing as they expressed sorrow over what had come between them.

“The UN ambassador to Bougainville and the Australian Army commander who led the Peace Monitoring Group were watching from the back of the room, speechless and amazed when that happened!" remembers Lloyd.

The ship’s final day in port was 21 September, the United Nations’ International Day of Peace. That afternoon, a traditional ceremony was held on the quayside to publicly mark the progress made on board. Hundreds gathered in the shadow of the ship to witness former enemies participate in cultural expressions of togetherness and seal a symbolic pledge.

The UN ambassador, His Excellency Mr. Noel Sinclair, gave a stirring speech at the reconciliation ceremony, holding up Doulos’ community as an example for the world.

“Your floating missionary group of more than 30 nationalities is a demonstration of the reality and effectiveness of unity and reconciliation among people,” declared the ambassador. He found it fitting that the vessel had become the platform on which the island's leaders recommitted to their responsibilities “in a serious manner, seeking the wisdom, blessing and guidance of the Prince of Peace.”

The international community had deployed an Australian-led force to oversee the truce. These military men asked for copies of the Jesus film in Pidgin English to take the message of restoration to village communities. Teams from Doulos brought huge donations of books to rebuild destroyed libraries and help a generation of unschooled children to make a fresh start.

“The Doulos leadership is still a bit stunned and humbled at being a part of the peace and reconciliation process, feeling that they were merely a witness to what God is doing in this province,” said a report from the ship, as she sailed away.

In her wake, word got around that the island was ‘open for business’ once more, and international vessels resumed trade there. Doulos had brought New Testaments in the East Papuan language of Naasioi, which was a great boost to the work of Wycliffe Bible Translators and encouraged local pastors. Many churches were challenged by the political unity the ship’s visit had fostered, leading them to set aside their denominational isolationism.

OM’s Ship Ministry first formed a bond with Papua New Guinea when the original Logos called there in 1979, and continues to enjoy strong links with the nation. Many believers have been inspired into ministry or missions. In 2017, six Papua New Guineans are serving the Lord on board Logos Hope.

Julie Knox, from the UK, is the writer for OM Ships, having been called to the ministry out of a career in broadcast journalism. In 2016, she hung up her microphone and body armour but found that her previous experience of reporting from warships could be used during a stint at sea as Logos Hope’s journalist. Julie is now shore-based, working from the Ship Ministry’s office in Germany.

Published: Tuesday, 27 June 2017
Credit: Julie Knox
© 2017 OM International This email address is being protected from spambots. You need JavaScript enabled to view it.