From apathy to action 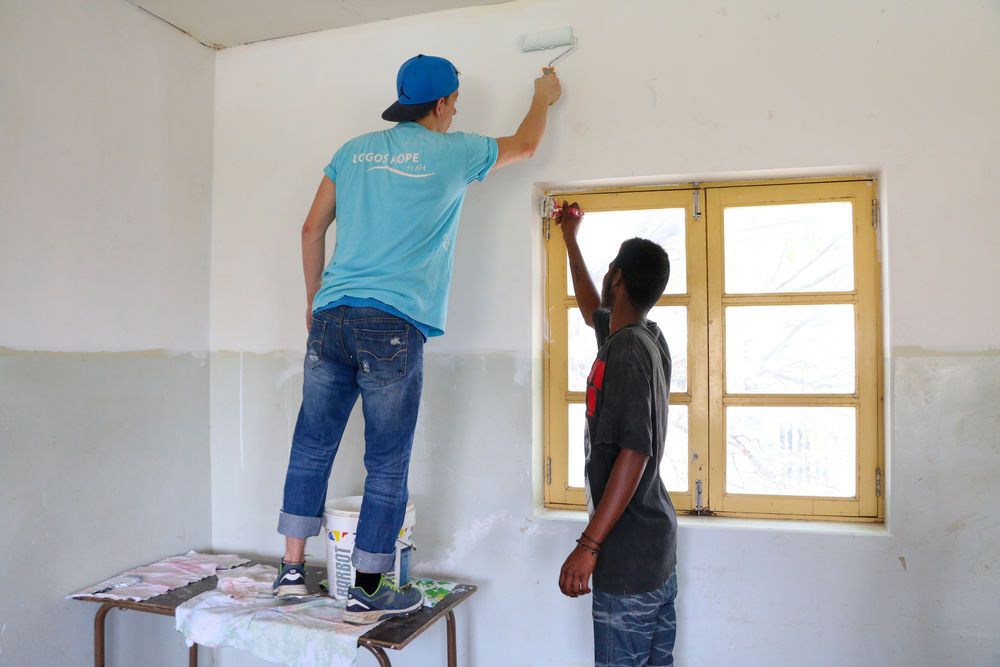 Cape Verde: Praia, Cape Verde :: Theo Valade (France) and a local man paint a pre-school.
After more than 20 years of classes, the rooms of São Martinho Grande – Lêm Dias’s preschool in Cape Verde were in need of some love and attention. A team of Logos Hope volunteers was asked by Pastor Idrissa Gomes of Praia’s Nazarene Church to spend the day sanding and painting the school’s two classrooms.

The crewmembers were joined by men from the local area and worked from morning to late afternoon to finish the project. The team also had the opportunity to sit down with a group of men, women, and children on the street to talk about concerns in the community.

The adults asked for prayer on three main needs: quality teachers for the school, a closer medical clinic, and relief from the drug and alcohol addictions plaguing many in the community. Miguel Amaro (Brazil), who served as the team’s translator throughout the day, assigned one point to each crewmember and asked everyone to bow their heads to pray. “That is the only thing it is okay to be addicted to: prayer!” said one man, which elicited a laugh from the group.

When the pastor returned to collect the team, he found everyone singing in Portuguese as Miguel strummed along on the guitar.

When Pastor Idrissa entered the preschool to see the result of the team’s work, he struggled to contain his excitement. “Wow! This is amazing!” he said, repeating the praise over and over again as he walked around the classrooms. “This is a transformation that could only have been done through God!”

One of the men from the community, who had worked alongside the team from start to finish, also voiced his surprise at the outcome of the day. He expected to be one of only two local men working with the Logos Hope crewmembers. Instead, he witnessed a transformation in the attitudes of his neighbours and saw their apathy change to action.

As the preschool children’s fathers saw the ship’s volunteers working to improve the facilities, they were motivated to do the same. By the end of the day many other men had made themselves available to help with the work. Through the teamwork, the project was completed more quickly, and led to more personal connections between crewmembers and the men of the community.

Published: Friday, 11 November 2016
Credit: Rebecca G.
© 2016 OM International This email address is being protected from spambots. You need JavaScript enabled to view it.

Mindelo, Cape Verde :: An unexpected turn of events leads to an opportunity for the Gospel to be shared and demonstrated.