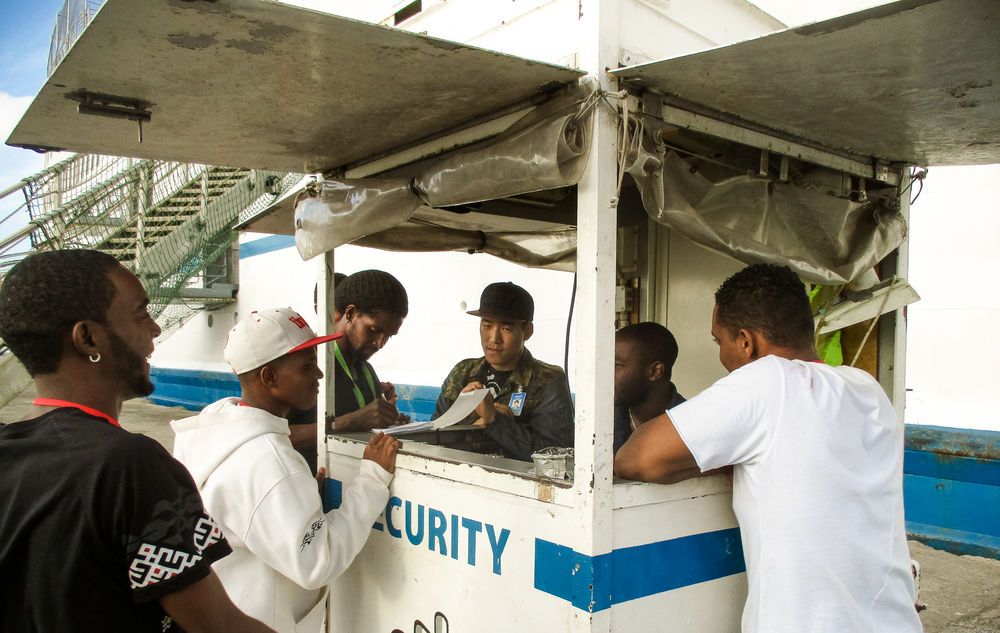 Cape Verde: Mindelo, Cape Verde :: Crewmembers invite local mento board Logos Hope for a service on board.
As some of Logos Hope's crew enjoyed free time at a beach in Mindelo, Cape Verde, Ofasia Wayne (Papua New Guinea) had his mobile phone stolen. Through a fellow crewmember’s vigilance, Ofasia was able to retrieve his property, but he and his friends cared about more than just getting the phone back.

JaeHyon Park (South Korea) called out to the thief as he was running away and got him to turn around, but he could not speak the man's language to have a proper conversation.

Across the street sat a group of men under the influence of drugs and alcohol. When they noticed the struggle to communicate, one of them came over to help with translation. Through the translator, JaeHyon found out that the thief’s name was Stefan, and so JaeHyon asked if he could pray for him. Stefan welcomed the prayer, and after praying for him, JaeHyon began to tell to him about Jesus.

After talking for a while on the beach, the crewmembers invited the whole group back to Logos Hope for breakfast.

The five men stayed for the morning church service and spent the afternoon touring the ship and talking with the volunteers. JaeHyon and Ofasia presented the Gospel to the group and explained that even good men are still in need of God’s forgiveness and grace.

“When I came onto the ship, I was drunk and high,” said one of the men to the crewmembers. “But now I can think clearly and understand what you are telling us.”

“I’m sorry for trying to steal your phone,” said Stefan. “I forgive you,” said Ofasia, giving the man a hug. “God loves you, and I love you too.” It was the final day Logos Hope would be open to the public before setting sail, so Ofasia asked a local Christian who had been volunteering on the ship to write down the men’s contact information and check in with them after the vessel left the island.

Ofasia is optimistic that the men’s time on the ship will be more than just a fond memory; he hopes that it will change the course of their lives. “I will use my phone to follow up with the port volunteer, to make sure he follows up with the men!” smiled Ofasia.

Published: Thursday, 17 November 2016
Credit: OM International
© 2016 OM International This email address is being protected from spambots. You need JavaScript enabled to view it.

Praia, Cape Verde :: Crewmembers from Logos Hope connect with local men as they work together to paint a preschool.