An escape from sinking sand 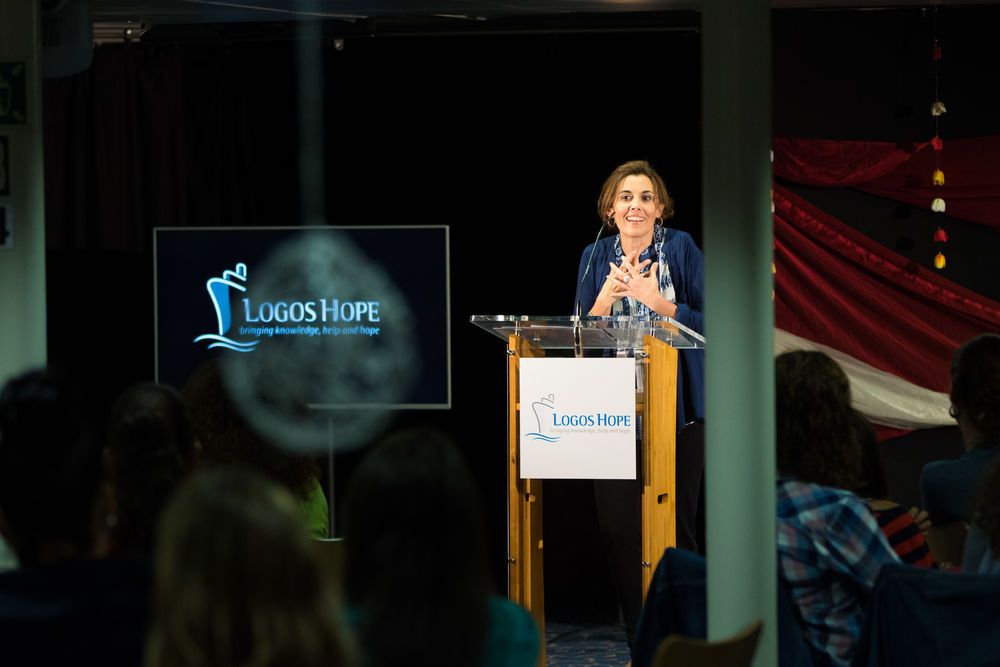 Spain: Santa Cruz de Tenerife, Spain :: guest speaker Ana Ortega shares her story about the destructive power of negative words at a ladies conference on board Logos Hope.
“You are going to act according to what you believe you are worth,” said Ana Ortega, the guest speaker at a ladies’ event on board Logos Hope in Santa Cruz De Tenerife, Spain. “When you think negatively about yourself, it is like you are in sinking sand and it paralyses you because you cannot see yourself clearly.”

Ana told the ladies of a time when the island across from Tenerife was hidden from view for several days by thick clouds. Her immediate reaction was to think, ‘What happened to it? It has sunk!’ “The truth was that the island was still there,” said Ana, “but I had already decided in my mind the worst case scenario of what had happened.” Ana explained to the women that just as her clouded view of the island led to her believe that it had sunk, so a woman’s distorted view keeps her from seeing herself the way God sees her.

Claudia Rocha (Colombia), whose personal story relates to the topic Ana spoke on, said to the women, “I realised that there are many things that I believe about myself that are wrong. When I started to discover God’s love for me, I knew I needed to take out all the bad words that I thought about myself. If I did not do this, I could not know the truth about what God thought of me.”

There were several women who began to cry as they listened to Ana and Claudia talk about their journey to escape the ‘sinking sand’ of negative words, and their path to finding their worth in their Creator.

At the end of the night, one woman grabbed Karla Guzman’s (Mexico) hand and began to tell her about things that had been happening in her life. Karla and the woman prayed together, and Karla told her, “God knows your story and you can trust in Him.”

Karla was encouraged to see women opening up to crewmembers to talk through their personal struggles, showing just how deeply some of the women were impacted by the message Ana and Claudia shared.

Published: Friday, 09 December 2016
Credit: Rebecca G.
© 2016 OM International This email address is being protected from spambots. You need JavaScript enabled to view it.