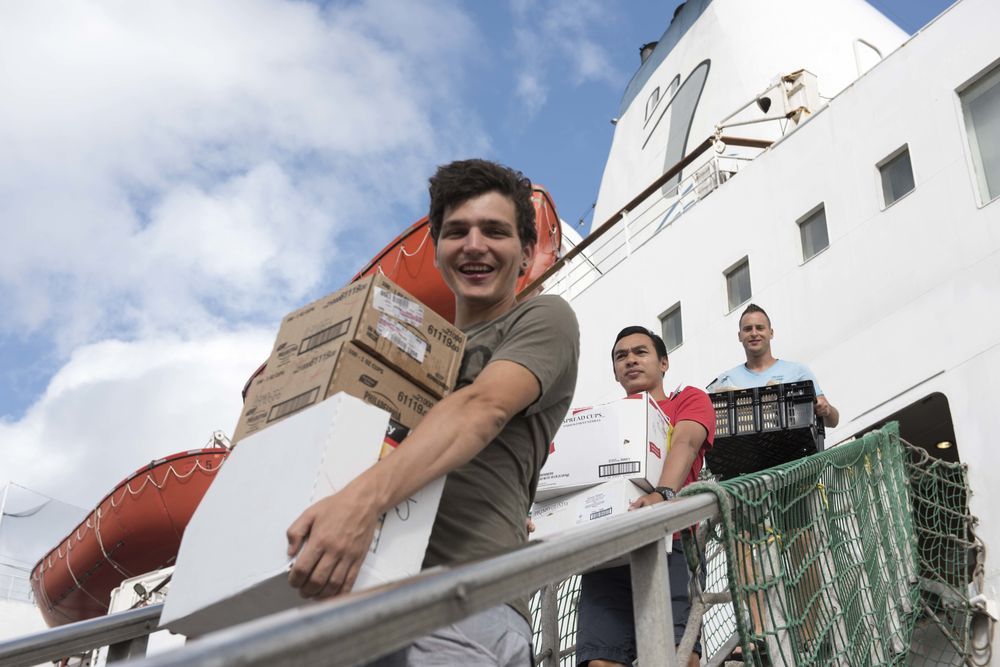 Curaçao: Willemstad, Curacao :: Crewmembers (l-r) Micha Roggensinger (Switzerland), Boyd Srisakunphaet (Thailand) and Hugo van Nigtevecht (Netherlands) leave Logos Hope ahead of dry dock.
The ship’s community of volunteers has said farewell to one another and departed the ship for different locations around Curaçao and across the world for the next four weeks, as Logos Hope enters her annual dry dock period of maintenance.

The ship will be taken out of the water for scheduled repairs and repainting. Project workers with specialised skills have flown in to Willemstad to work alongside the Marine Operations department, while the rest of the crew must vacate the vessel.

Many of the volunteers will be participating in training courses, covering subjects like mentoring, leadership, sharing the gospel, as well as learning how to lead events on human trafficking and HIV and AIDS awareness. These training courses are offered at intervals throughout the year on board the ship, but many crewmembers hold positions that prevent them from being released from work to attend. The four-week dry dock gives these volunteers a break from their daily responsibilities and the opportunity to learn new skills.

Members of Logos Hope’s Line-Up department – the crewmembers sent ahead of the ship’s arrival to make preparations for the visit in each port – will also be attending a conference.

Nine teams will travel to Europe, Asia, and North, Central and South America to present the work of the ship and invite people to consider volunteering for themselves. Clement Tay (Singapore), Logos Hope’s finance manager, will be visiting Denmark and Ireland with four other crewmembers. In his eighteen months on board, Clement has only gone on day-long outreaches, so he is excited to be part of a longer assignment. “I am looking forward to encouraging young people to join the ship!” he said.

The teams have many appointments scheduled at schools, churches, and other public gatherings. One group is going to Russia, which will be a first for Gustavo Cardoso (Brazil). The twenty-one year old has a message of challenge for Christians there. "I want to encourage them to leave their comfort zone, like we have. In the year I've been on Logos Hope, I've learned to rely on God much more and my vision of serving Him overseas - which was very small - is now wide open."

The cast of The Lion, the Witch and the Wardrobe will be rehearsing throughout the dry dock period as new members learn their parts and prepare for future shows in the ship's theatre.

Other teams have been assigned to initiatives across the island of Curaçao. Some will help with practical work, like painting, gardening, tiling and small building projects. Other volunteers will work with children, men and women recovering from addictions, or people with mental disabilities.

Pamela Mua (Papua New Guinea) will be helping out at a home for elderly people who have dementia. “I don’t know what to expect, but I hope that through just sitting and listening to the men and women, that they will feel like we are a family that loves and cares about them,” said Pamela.

The volunteers will return from all corners of the world just before Easter, when Logos Hope will be back in the water, ready to sail to her next Caribbean port-of-call, in Bonaire.

Published: Tuesday, 14 March 2017
Credit: OM International
© 2017 OM International This email address is being protected from spambots. You need JavaScript enabled to view it.

Willemstad, Curaçao :: Crewmembers visit sex workers to talk to the women, pray with them and invite them to attend an onboard event.