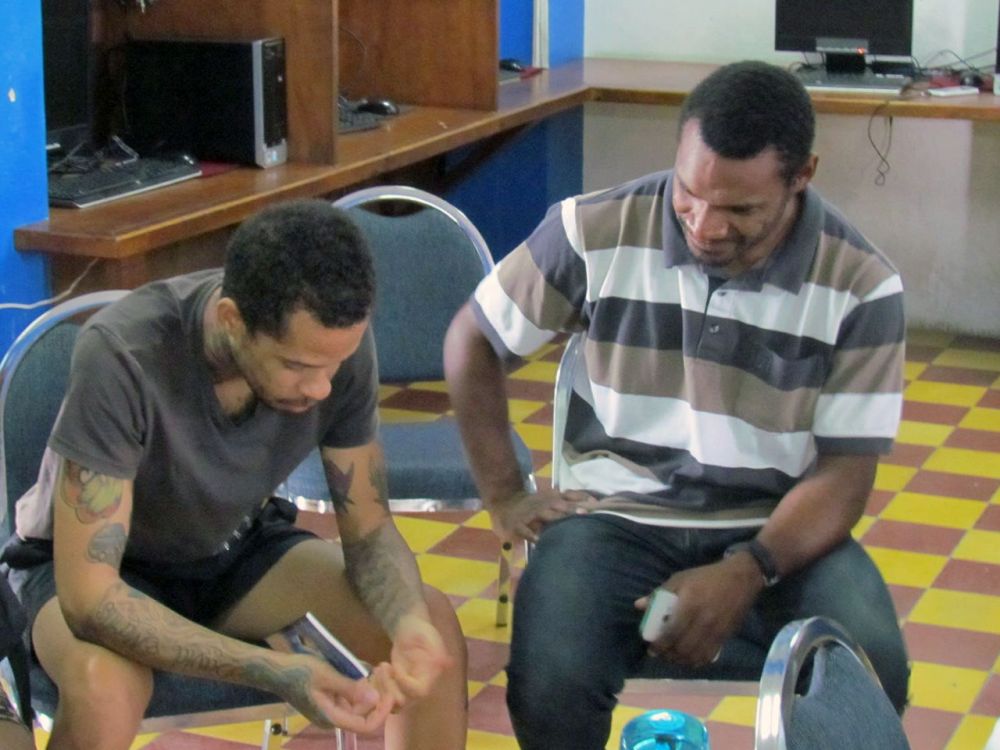 Curaçao:
Tattoos have proved to be powerful illustrations to point a young man in Curaçao to faith in Christ.

The man was one of those being helped by the Splikami foundation, a community project volunteers from Logos Hope are assisting while the ship undergoes maintenance.

James* has received training to repair telephones and computers, with the hope of finding a job and a place in society. As they got to know James, the team of crewmembers learned he had grown up in a rough neighbourhood. His heavily-tattooed appearance had become a barrier to being respected or offered work.

Ofasia Wayne (Papua New Guinea) asked him about the designs on his skin. As James explained the inkwork, Ofasia was struck by how this islander had chosen several permanent expressions of the Christian faith.

“He had ‘God loves me' on his left arm,” says Ofasia. “So I connected it to the Scripture in John 3:16, and shared how God demonstrated His love by sending His one and only beloved son to die for James.”

Ofasia pointed to James’ neck, where the words faith, hope and love were tattooed. “I showed him the verses in the Bible mentioning these. As we talked, James decided he would like to accept Jesus into his heart and he prayed in his Papiamento language.” Ofasia encouraged James that what is within matters more to God than outward appearances.

The team has also been painting the Splikami building and participating in activities with the young people with learning difficulties who are supported there through vocational and personal development courses.

An eco-village nearby supplies Splikami with fresh produce. The team spent a week doing all sorts of jobs on the farm and getting to know their fellow workers, visiting them in their homes and praying with them about issues they were facing.

On their final day a barbecue was held to thank the crew, who spoke about their personal experiences of service on Logos Hope. One woman was moved to say, “Please keep on sharing God’s deeds in your life to more and more people in the world, so that they may enjoy the true peace which God has given you.”

Published: Tuesday, 11 April 2017
Credit: OM International
© 2017 OM International This email address is being protected from spambots. You need JavaScript enabled to view it.

Willemstad, Curaçao :: Crewmembers visit sex workers to talk to the women, pray with them and invite them to attend an onboard event.