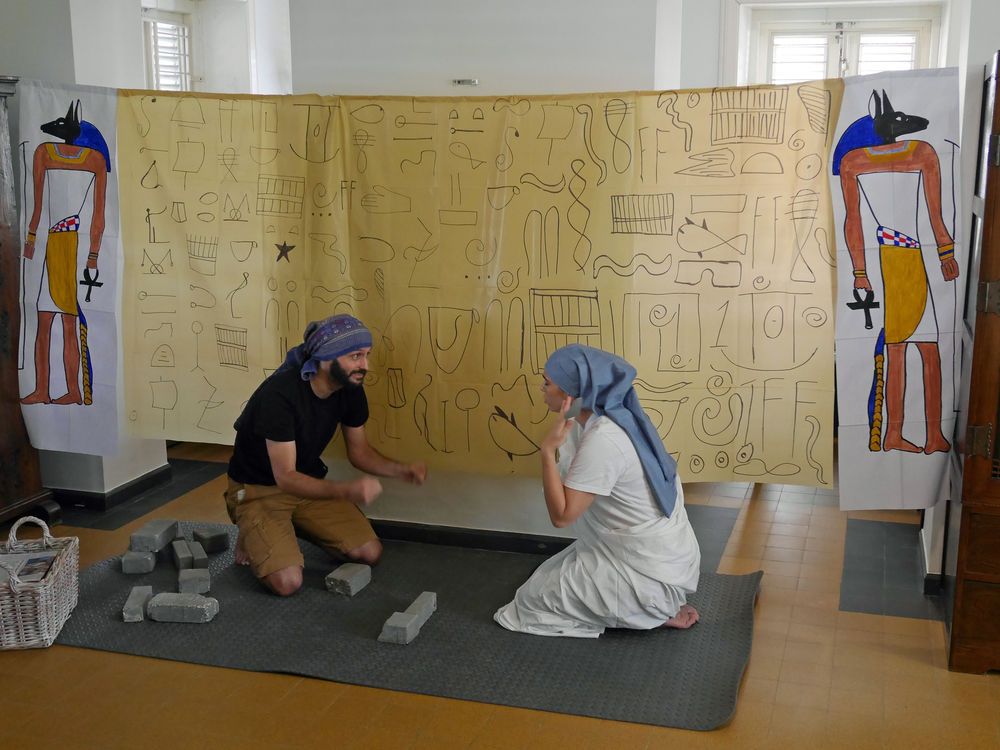 Curaçao:
Ancient Egypt was brought to life for a group of children in Curaçao, thanks to the creativity of a team of volunteers from Logos Hope.

Six crewmembers helped out at an after-school club for children from difficult backgrounds during the month the ship was being serviced in dry dock. The team cleaned the centre each morning and prayed with teachers at lunch breaks. On Mondays, they were allotted 45 minutes to teach the pupils from the Bible.

Praying about how to make best use of this time, the team leader Jazmin Carrillo (El Salvador) suggested writing a play to be performed over the course of three weeks. It would bring a Bible passage to life and take the Curaçaoan children on a journey as they learned about God leading the Israelites out of slavery in Egypt.

So began an interactive adventure, with the ship team pouring their talents into making props and costumes, learning lines and decorating their stage.

The first performance transported the after-school club back 4,000 years as they saw the rough treatment husband and wife Greg and Anne Pelletey (France) had to endure as they played Israelites who were forced to make bricks for their cruel slave-drivers. The children were enthralled as they learned about plagues and the Passover, with God rescuing His people as Moses led them through the Red Sea.

Receiving paper pyramids with a verse of Scripture to learn, the young people were encouraged to trust God for themselves and follow His plan for their lives.

The team of crewmembers also found ways to connect with people they met beyond the after-school club during their time away from Logos Hope. Making friends with Jamaican construction workers, they shared meals and personal stories about their faith. They also followed up connections with women in prostitution on the island, who had attended an event on the ship.

In their final week, the team organised a cultural evening to showcase the five different countries they represented. They dressed in their national costumes, presented videos explaining their homeland, performed dances and served traditional food. A well-connected teacher introduced the crewmembers to a radio presenter, who interviewed them on air. The team was thrilled to share their own stories and publicise the event. More than one hundred people attended.

“We are amazed at how God trusted us with so many opportunities to share our faith,” said Viviann (Central Asia).

Now back on board the ship and resuming their ministry in other parts of the Caribbean, Logos Hope’s crew will carry fond memories of their extended time in Curaçao and the many interactions they had with people there.

Published: Tuesday, 18 April 2017
Credit: OM International
© 2017 OM International This email address is being protected from spambots. You need JavaScript enabled to view it.