The return of 'the book ship' 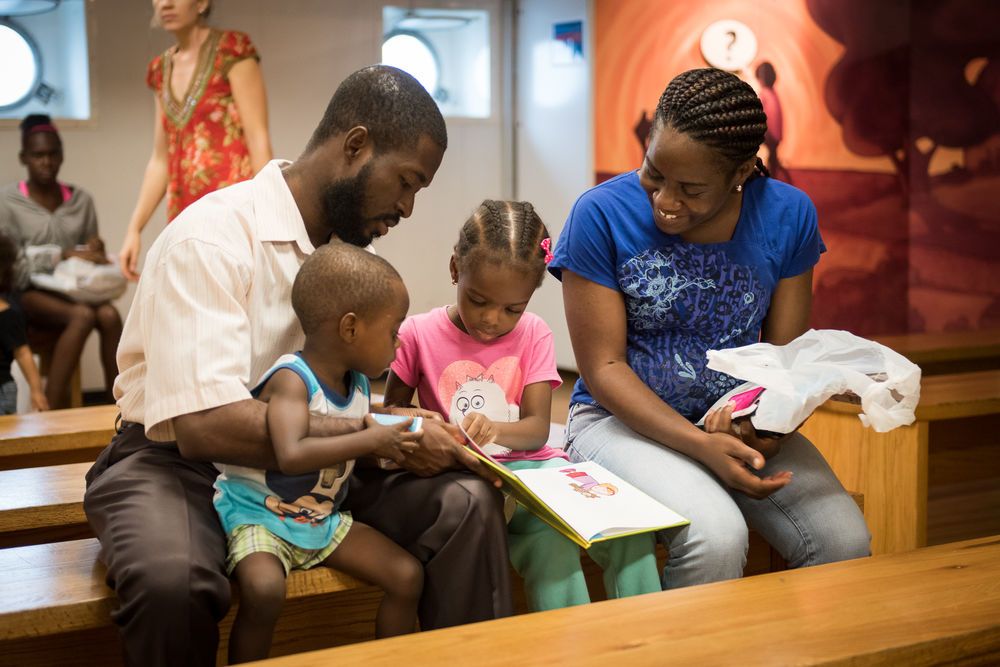 Jamaica: Kingston, Jamaica :: A family visiting the ship reads a book they purchased on board in Kingston, Jamaica.
“You tell me about love, but I’ve never experienced these things you describe as love before,” a 10-year-old Jamaican girl told her teacher.

Advance preparation team members visited many public schools as they were getting ready for the ship’s arrival to Kingston. The volunteers learned the girl’s father had been killed in front of her, and her mother is addicted to drugs. The team members realised that there are Jamaican children growing up in broken families who have never experienced pure love, so they decided to centre the theme for Logos Hope’s time in Kingston on sharing God’s love.

Bookfair Manager David Waugh (Scotland) has been to Kingston four times with the organisation's ships. “The first time I was sent on an advance preparation team, I was sent to Kingston,” said David. When his team arrived in the city in 2004, he was surprised to meet a teen who remembered and re-enacted motion-by-motion a drama a team from the ship had performed during a previous visit. “He could even remember the meaning behind the drama!” said David.

Visits from ‘the book ship,’ as Logos Hope and her sister ships are known, are fondly remembered and much anticipated by Jamaicans across the island. “A man danced down the hall when he found out Logos Hope was coming,” said George Greenwood (UK), the advance preparation team’s leader. Other Jamaicans burst into tears of joy at the news.

One hundred and forty local people will be helping as port volunteers and ambassadors during the five-week visit to Kingston. Even after the volunteer positions had been filled, team members continued to receive an average of 10 calls a day from other people offering their help.

Crewmembers are preparing for a busy and fruitful visit. Over 120 onboard events and onshore activities have been coordinated, and volunteers anticipate welcoming 20,000 students onboard for school visits to the bookfair.

It has been seven years since Logos Hope’s last visit, and the excitement is palpable among crewmembers and visitors alike as ‘the book ship’ reopens on the island of Jamaica.

Published: Tuesday, 16 May 2017
Credit: Rebecca Gaasrud
© 2017 OM International This email address is being protected from spambots. You need JavaScript enabled to view it.