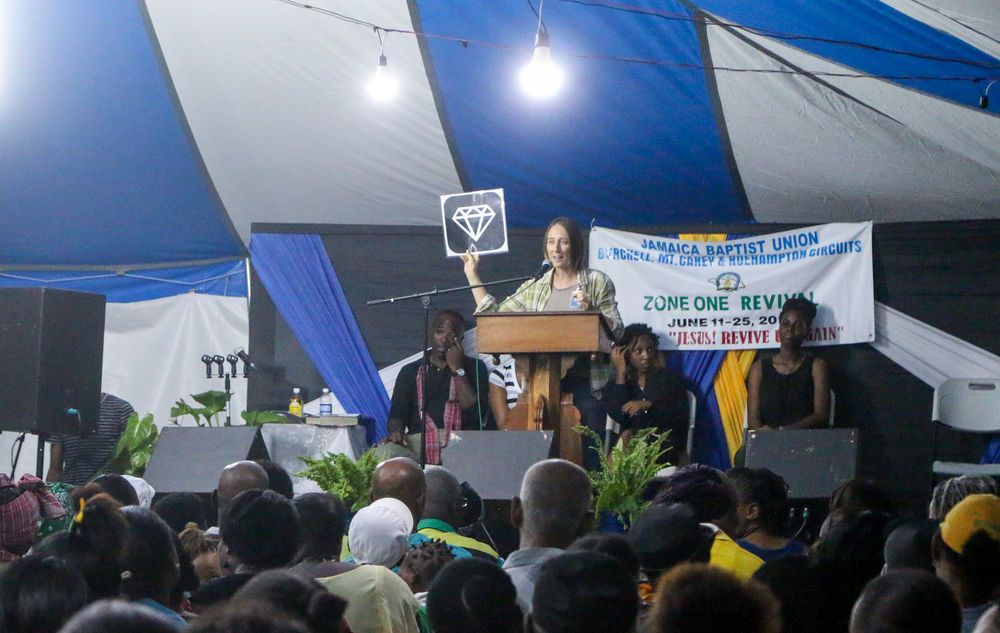 Jamaica: Montego Bay, Jamaica :: Yasmin Henry (Australia) shares the gospel using pictures from the One Wish bracelet during an evening meeting of Baptist churches.
The congregations of several Baptist churches around Montego Bay have been joining together for nightly tent meetings of prayer, worship and teaching for a time of mutual encouragement. Crewmembers were invited to one of the evening rallies to inspire the youth to live lives dedicated to Jesus.

As the volunteers were waiting for their driver to arrive, they began talking to a local man, Ricardo, who was sitting outside the port gate selling snack foods to people visiting Logos Hope. Yasmin Henry (Australia) showed Ricardo an optical illusion and used it as a conversation-starter to talk about faith.

Ricardo was very interested, and when the driver arrived and the team was preparing to leave, Ricardo asked Yasmin for a Bible. “Matthew, Mark, Luke and John are known as the Gospels,” said Yasmin, showing Ricardo where they are located in the Bible. Yasmin explained that the books are about Jesus’ life, and suggested Ricardo begin by reading those if he is interested in learning more about Jesus.

At the rally, Simone Merz (Switzerland) acted out a scene of a woman who wakes up in the morning and gets ready for her day, goes to church and puts money in the offering tray, and then is surprised when God asks her to give Him something more. Yasmin used the drama to explain that God wants more than a person’s money: He wants the person’s life to be surrendered to Him.

Yasmin shared the gospel using enlarged images of the One Wish bracelet’s pictures, which show how valuable men and women are in God’s sight, the sin that separates mankind from God, Jesus’ sacrifice on the cross, and God’s wish for a personal relationship with people. Daniella Laxabul (PNG) expanded on Yasmin’s message by sharing her personal story of why she gave her life to Christ.

The volunteers were thankful that many were able to hear the gospel message and pray that people’s hearts will be moved to live lives dedicated to God.

Published: Tuesday, 27 June 2017
Credit: Rebecca Gaasrud
© 2017 OM International This email address is being protected from spambots. You need JavaScript enabled to view it.