In equal need of forgiveness 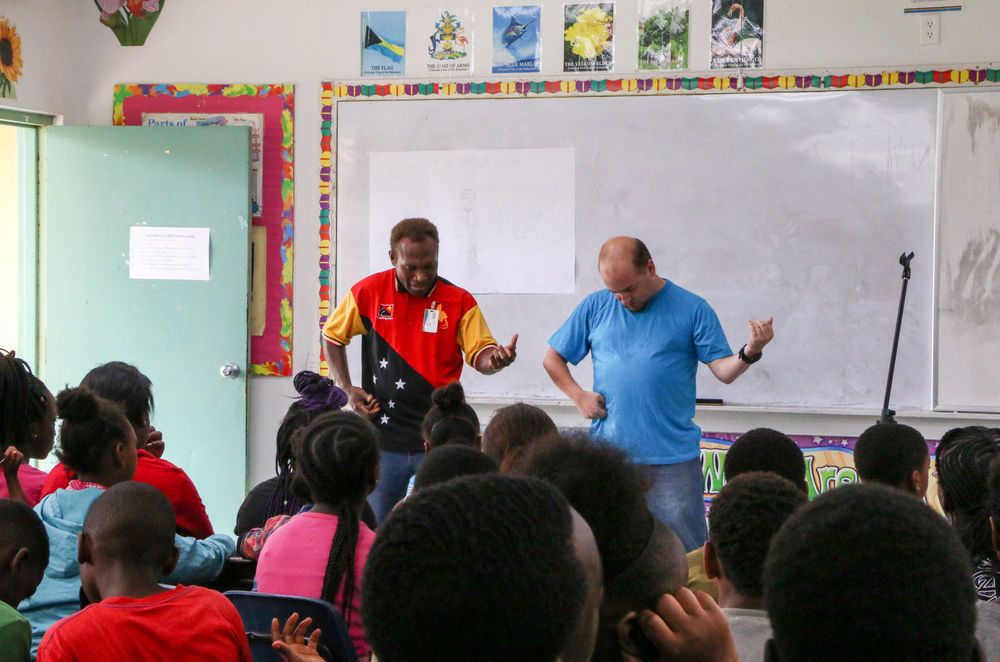 Bahamas: Freeport, The Bahamas :: Collin Kepas (Papua New Guinea) and Nate Johnson (USA) perform a drama during a visit to a police summer camp for children.
At Police Camp Central, a summer camp for children run by the police department, volunteers used a drama and illustrations to teach the campers about God and His desire for a personal relationship with them.

During the drama, Nate Johnson (USA) stood rigid while Collin Kepas (Papua New Guinea) moved his arms and legs into different positions. Collin posed Nate as a runner and then ran in place beside him, but when Nate did not respond the way Collin wanted, Collin acted disappointed. Through the drama, crewmembers encouraged the kids to look to God’s standards as the ultimate guide in life, instead of being influenced by people around them.

The team split the children into two smaller groups by age and shared the gospel message using visual aids. One crewmember held up three ropes of varying lengths and asked the kids to give names to each one. ‘Emma’, ‘KK’ and ‘Jordan,’ as the ropes were enthusiastically dubbed, were then placed at the centre of a discussion about heaven.

“Emma has a short rope because she never disobeys her parents and she always goes to church; KK goes to church occasionally, but she often makes mistakes, so her rope is the medium length. Jordan’s rope is the longest because he has done many things that are wrong; he doesn’t care about God or obeying his parents,” said the crewmember. “Who do you think will go to heaven?” “Emma!” shouted the children.

Using an illusion, the crewmember held the ropes so that they all appeared the same length. “Going to heaven does not depend on the number of mistakes we have made, because in God’s sight, we are all equal; we have all done things that are wrong,” said the crewmember. “What matters is if we say ‘I’m sorry’ to God and ask Him to forgive us. Then we can have a personal relationship with Him and we can go to heaven.”

The children’s attention and active participation encouraged the team. Crewmembers hope the seeds planted by the drama and illustrations will be good reminders for the kids and lead to many lives lived for God.

Published: Tuesday, 08 August 2017
Credit: Rebecca Gaasrud
© 2017 OM International This email address is being protected from spambots. You need JavaScript enabled to view it.

Nassau, The Bahamas :: A Filipino volunteer joins a team of Chinese-speaking crewmembers to visit local Chinese-owned shops and is surprised to connect with four Filipinos at a supermarket.

Freeport, The Bahamas :: Logos Hope makes her inaugural visit to Freeport, following up on sister ship Logos II's time in the port in 2008.