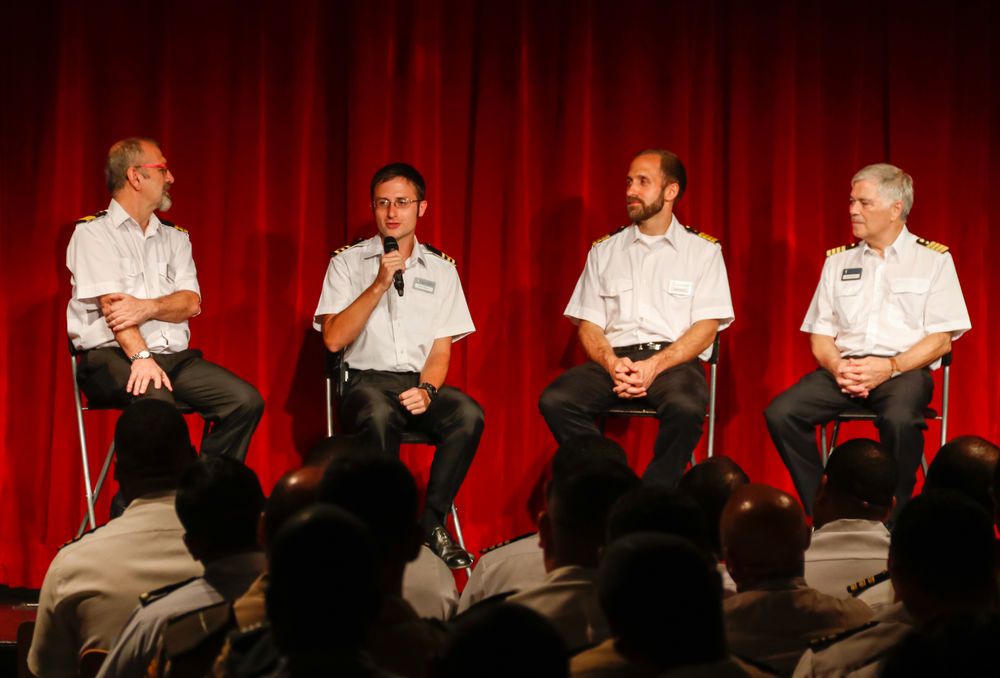 “We were having dinner, and the ship’s crew ran over to the windows and you could hear people saying, ‘Wow! Look there!’” said Logos Hope’s Second Mate and Safety Officer, Ionut Vlad (Romania). “I had to go see what was happening because I thought maybe it was something related to the safety of the ship, but they were looking at you! They were admiring you in your uniforms.”

Over 220 members of the country’s navy attended the Crew Meets Crew event on board Logos Hope, where they saw cultural performances, participated in friendly competitions and interacted with crewmembers in the ship’s Marine Operations department.

Logos Hope’s captain, chief engineer, first engineer and chief mate were invited on stage to answer a series of questions related to their experiences working on ships and their decision to forfeit a sizeable salary to become a volunteer on a vessel.

“For those of us who live on a ship, you know that it is not an easy life. There are a lot of temptations, especially on the commercial ships,” said First Engineer Peter Huizinga (Netherlands). “A year ago I was an engineer with a big salary, but I was not happy. All of the money that I earned was not what I wanted.” Peter explained that serving as a volunteer on a ship that helps people in need is what he finds fulfilling. “This gives more satisfaction than all the money in the world,” said Peter, which elicited an enthusiastic round of applause from the audience.

Ionut explained that not only are the naval men and women people in uniform, but they are seen as leaders in the Dominican Republic’s society and people observe their actions. “You guide people through the way you act,” said Ionut. He reminded them that with great honour comes great responsibility.

Crewmembers enjoyed interacting with the navy personnel, swapping sea stories and talking about life as a mariner.

Published: Friday, 22 September 2017
Credit: OM International
© 2017 OM International This email address is being protected from spambots. You need JavaScript enabled to view it.