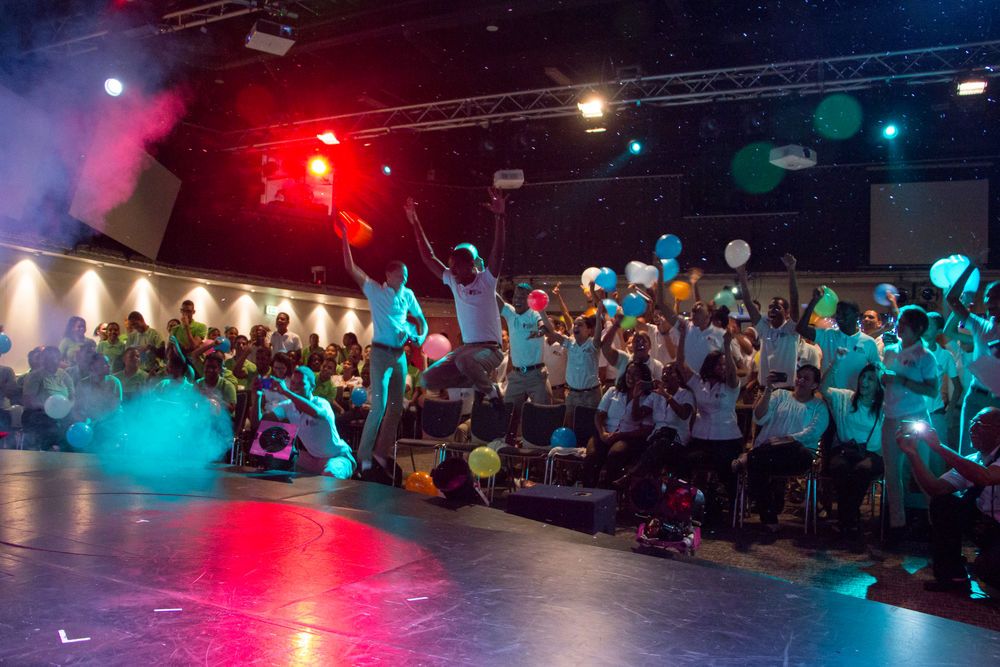 Dominican Republic: Santo Domingo, Dominican Republic :: Deaf students cheer during an event for their school in the Hope Theatre.
Crewmembers encouraged deaf youth to find their identity in their Creator during a visually stimulating event for deaf schools, which featured special performances by the onboard clowning, drama and sign language clubs.

Logos Hope’s volunteers performed a drama in which a clown struggled to make a friend because he was different from other clowns. “The clown put his identity in other people. They thought he was stupid and annoying, and he thought it was true,” said Dyfan Graves (Wales). “I have felt this way before.”

Dyfan used his personal experience with Asperger’s syndrome, a disorder that affects how he relates to people socially, to connect with the school children who may feel different from others because they cannot hear. “I did not fit in because I was different, but what I learned is that there is a person who loves me and accepts me for who I am in spite of my Asperger’s syndrome,” said Dyfan. “Don’t put your identity in what other people think about you; put your identity in what Jesus thinks about you, because you are His child!”

In a second performance, Vera Bandmann (Namibia) narrated a story of a village of wooden people who judged each other based on appearance and abilities and gave star stickers as awards and circle stickers as reprimands. When one villager stopped caring about the opinions of his neighbours and began spending time with the woodcarver who had made him, the circles and stars no longer stuck to him.

“Why didn’t he have any stickers?” Marco Arjona (Argentina) asked the teenagers. “He had love!” “He had protection!” signed two of the students. “He visited his maker, and he knew who he was,” said Marco. “As long as we know that our Maker has made us to be special, that changes everything!”

Several students approached the sign language translator at the end of the event to tell her how much they were enjoying their visit to Logos Hope.

Published: Tuesday, 26 September 2017
Credit: OM International
© 2017 OM International This email address is being protected from spambots. You need JavaScript enabled to view it.