After the hurricane, hope 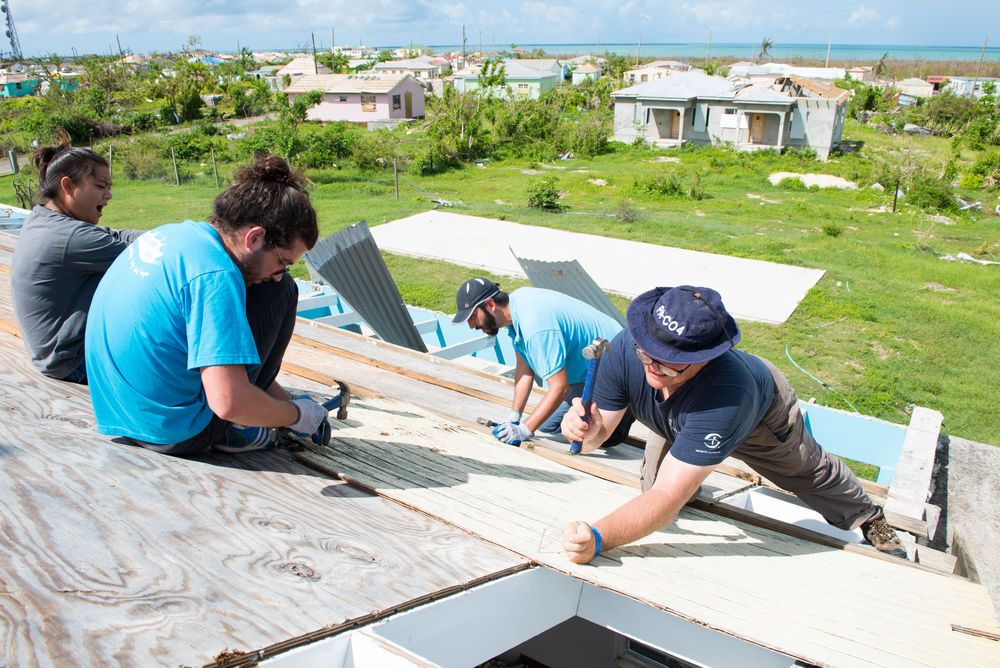 Antigua & Barbuda: St. Johns, Antigua and Barbuda :: Crewmembers fix the roof of a building alongside volunteers from Samaritans Purse.
Logos Hope’s crewmembers have partnered with Christian relief organisation Samaritan’s Purse to help victims of Hurricane Irma on the Caribbean island of Barbuda.

The ship’s community of energetic volunteers from all over the world boosted the disaster assistance response team sent to the island by Samaritan’s Purse. The US-based humanitarian aid agency is the only organisation currently working on Barbuda, supporting residents as they begin to return to their properties and rebuild their lives.

Most of the island’s buildings had their roofs blown off, and many homes were completely destroyed as Hurricane Irma pounded the smaller of the twin-island nation Antigua and Barbuda. All 1,800 Barbudans were moved to Antigua in the aftermath. All minus one: A two-year-old boy was pulled out of his godmother’s arms by the gale, which reached 185 miles per hour at its peak. Islanders mourn this tragedy but continue to voice their relief that it was the only death in a storm that caused such catastrophic damage. 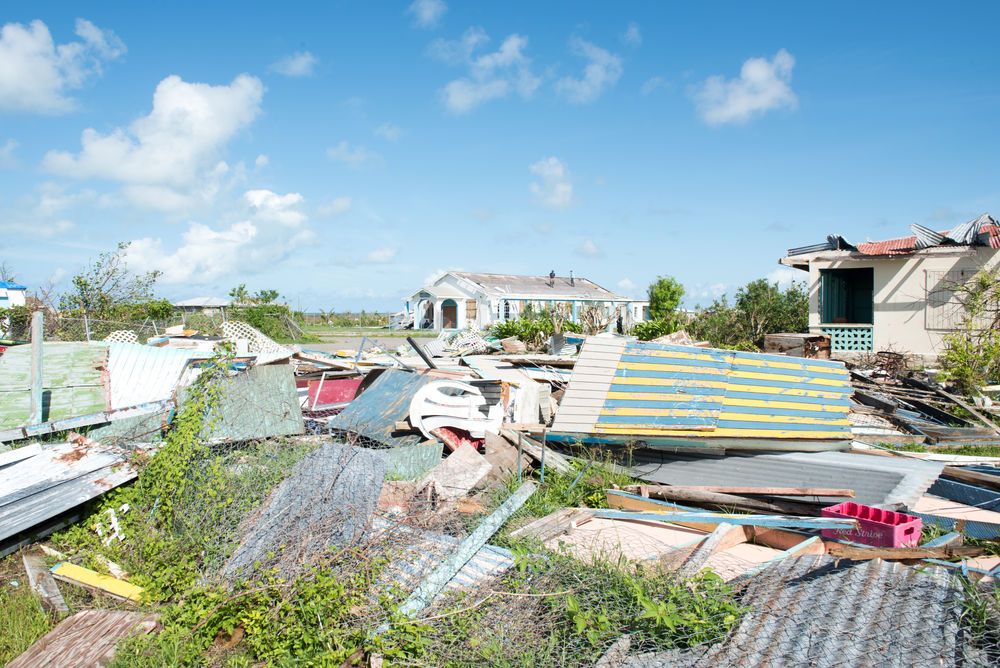 “My lovely island has been torn apart like a bomb was dropped in the middle of it,” said Devon Desouza, a hospital worker. “But we are very thankful for Samaritan’s Purse and Logos Hope coming over and assisting us, showing there are people who care and want to help us in whatever way they can.”

A total of 150 crewmembers joined the relief teams, island-hopping from Antigua on daily shuttle flights run by Mission Aviation Fellowship (MAF) or in the dedicated Samaritan’s Purse cargo plane, which also delivers aid to Dominica and Puerto Rico. As there is no functioning infrastructure on Barbuda, Samaritan’s Purse distributes small generators to households and has provided a water filtration system—the island’s only source of clean drinking water.

Logos Hope’s volunteers brought their electrical or carpentry skills to the effort of reinforcing homes and making them water-tight, as well as willing hands to clear debris from properties and open hearts to come alongside Barbudans as they sift through the few belongings they can find and work out where to begin putting their lives back together.

One such resident is Joyann, a schoolteacher who wept as she described huddling in a corner with her three-year-old daughter, her boyfriend and her elderly father. When their roof was ripped off, they tried to shield themselves under a heavy jacket and a piece of board. She looked up at a terrifying sky as the rain fell in and her little girl screamed at the wind. When the eye of the storm granted a brief respite, they climbed over their twisted fence and went in search of a sturdier building. Joyann carried her daughter; her boyfriend carried Joyann’s eighty-year-old father on his back.

Eight members of one family sheltered in a bathroom at Shiraz Hopkins’ mother-in-law’s home, he recounted:

“That’s the strongest area in the house. I was holding the door closed and we were hearing all kinds of sounds: the wind and waves battering, debris flying and hitting the house. We all held hands together and prayed, asking God to have mercy upon us. We started singing songs, rejoicing, because there was a peace that just came over us that everything was going to be OK. Most of the plywood boards on the roof lifted off and a lot of water was coming inside. I thought we should get out of the house. As we were singing and praising, something told me, ‘OK, it’s time to go,’ and as we opened the door, there was a calm. That was the eye of the storm—the best time to move."

Shiraz took refuge in his church, a double-storey building with concrete between the ground and first floors. There, he encouraged his neighbours—including Joyann—to praise God while the second half of the storm swept through. 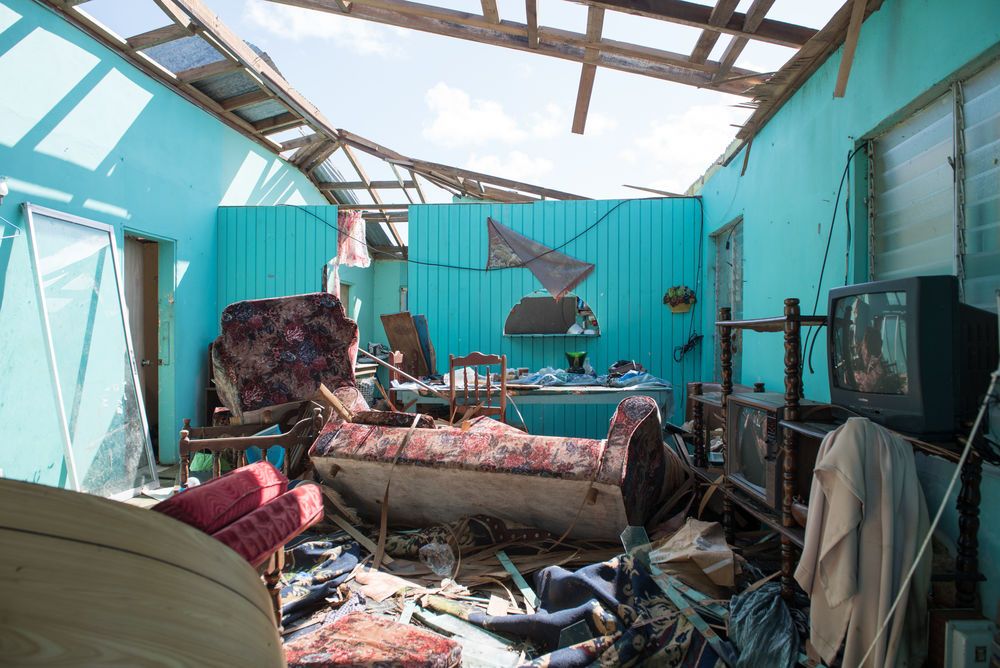 Littered across the island are personal items. A guitar in the grass; a smashed fish tank, its water long gone and its pebbles scattered. Crumbled walls reveal exposed rooms in disarray. Bedclothes and Bible pages flap in the breeze. Damp washing lies tangled round wooden poles in gardens. Twisted sheet metal is caught in trees. Most cars have cracked windscreens; some have been left on their sides. A key glints in the dusty street. No one knows where the door it fits is now. The farm animals that have survived roam wild.

It’s not the first time one Logos Hope crewmember has seen widespread destruction. Johanna Silva (Sri Lanka) and her family helped out after the tsunami that killed 150,000 people in her country in 2004. “Coming here to Barbuda, I didn’t expect the devastation to be almost to that magnitude,” Johanna said, as she stood in a street filled with rubble. “Everything that they had is gone in the blink of an eye. It’s heartbreaking. I was overwhelmed at the beginning, but it’s so encouraging to work with a hardworking team to make a difference in a community that really needs it.”

One of Logos Hope’s electricians, Timo Eschbach (Austria), offered his practical skills to help Barbudans, as well as encourage them in their faith. “I know we are here in a Christian country and people know Jesus,” Timo said, “But it can be times like this that people lose their faith. We can say, ‘There is a God, and He has sent us to help you.’ So I’m really happy to be here to bring hope to these people.”

For Samaritan’s Purse, the partnership with Logos Hope has been a blessing and a morale-boost, according to Mark Langham, the area coordinator. “The teams have been incredible,” he said. “They’ve worked tirelessly, had incredible attitudes, brought a joy and excitement that invigorates us every day. For me, that’s the Body of Christ, serving others and not expecting anything in return—and it’s also such a beautiful image of the Church at large, with so many countries being represented.” 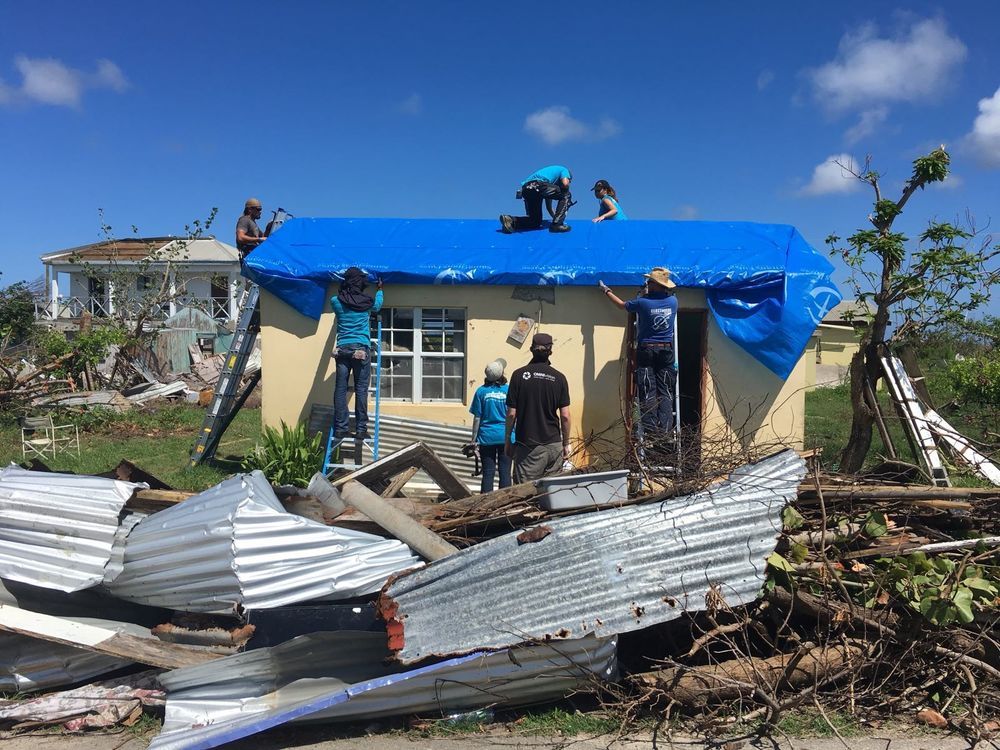 Logos Hope's Director, Pil-Hun Park, paid tribute to the long association between the two ministries, telling Samaritan's Purse, "We are not professional relief workers like you. We are just serving in a ship, but you made it possible for us to help others in need and because we're a family of God, we could do it together."

It’s estimated that Barbuda’s rebuild will take at least two years. Samaritan’s Purse is setting up a permanent presence on the island to assist. Logos Hope held a special event on board the ship in the port of St. John’s, Antigua, for displaced Barbudans. Shiraz Hopkins' voice was one of the loudest as he continued singing and praising God, grateful for all that his family and his community have been brought through.

“I can’t say thank you enough to the Almighty for Samaritan’s Purse,” Shiraz beamed. “Possessions we can replace and they will come. We see that God has already sent Logos Hope and Samaritan’s Purse, and He will send others, so we just thank God for His goodness. He will raise Barbuda again.”

Published: Tuesday, 17 October 2017
Credit: Julie Knox
© 2017 OM International This email address is being protected from spambots. You need JavaScript enabled to view it.

St John's, Antigua and Barbuda :: A visitor to Logos Hope is inspired by helping out at a soup kitchen.