Changing the face of missions 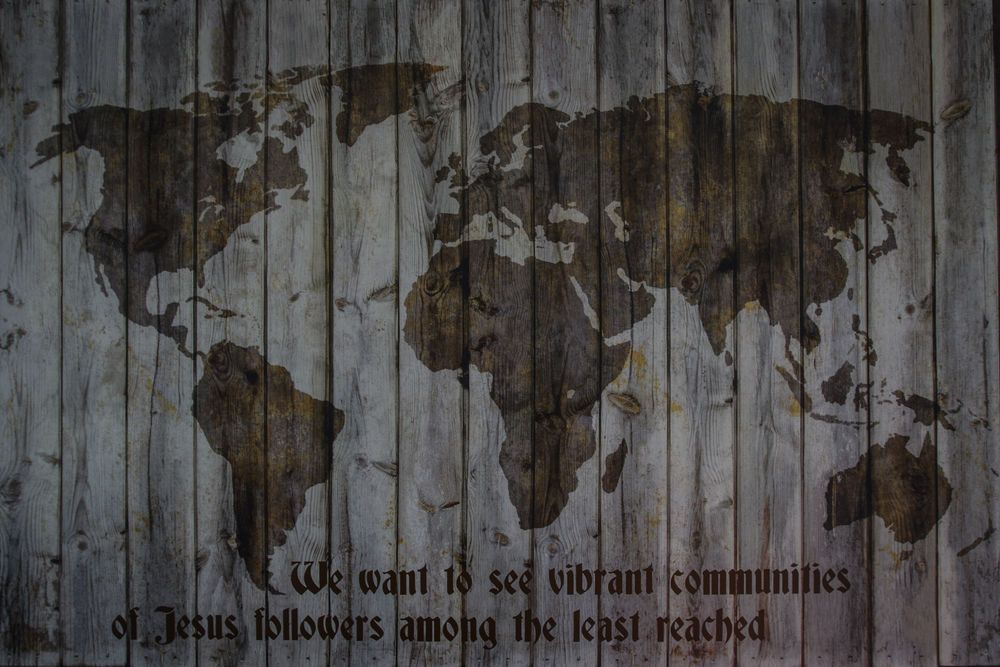 International: A wooden up-cycled map of the world hanging in OMs base in Moldova, with an inscription of OMs new mission statement: We want to see vibrant communities of Jesus followers among the least reached. Photo by Garrett N.
Operation Mobilisation (OM) was started by a teenager from the USA who was deeply burdened and challenged by the idea that 1.5 billion people in the world had never heard the gospel once. Compared to the USA—where there were many opportunities for people to hear—this felt like an injustice to OM Founder George Verwer.

George and a few other students pioneered OM’s work with short-term outreaches to Mexico, starting in June 1957. Early ministry campgains focused on sharing the gospel and leaving literature in local languages.

At the time, most established mission agencies required a seminary degree and lengthy or lifelong commitment, but George came with another message: "If you love Jesus, come with us and we will disciple you on the way.”

George believed that, if he could mobilise people, what they experienced could very well keep them involved for the rest of their lives. When no one else was doing short-term missions, George enacted this idea and changed the face of missions.

As OM grew—strengthened by its core of short-term and short-turned-long-term workers—its focus soon shifted towards Europe, the Muslim World and India.

During one early summer campaign in Europe, hundreds of volunteers gathered with the goal of distributing 25 million pieces of literature among every village and town in France. They missed their goal but reached it the following summer when over 2,000 joined the next campaign.

When so many considered the communist world closed to the gospel, a few OMers believed they simply needed another way to get literature in. So they retro-fitted vans with secret compartments to hide Bibles and Christian literature. Over the decades, they took thousands of tons of literature behind the Iron Curtain to ensure that the gospel would go to those who had never heard.

In the early ’60s, OM used trucks to carry literature and young people from Europe to India for evangelism. The first group arrived in India in 1964. From the beginning, OM worked alongside Indian churches—a radical departure from the normal practice of Western missionaries. All foreigners were equal team members with Indian brothers and sisters, whose leadership development was paramount.

Although the movement in India catapulted forward, the arduous two-month trip overland must have been pure agony for George, who sought to redeem every minute of time. Air travel was out of the question—think of how many tracts could be bought for the price of one plane ticket!—but another idea began to form.

Back in England, George, then in his mid-’20s, suggested buying a ship to take more literature and more people around the world, while saving time and money. The mission world wrote OM off at that stage. Even many within OM were against the idea, but George believed it was of God, so he kept praying and encouraged the movement to pray with him. Fifty years later, OM has had four ships visited by over 40 million people; millions more have interacted with crewmembers in port cities—many of these hearing the gospel for the first time.

In those first three decades, OMers connected with over one billion people, and launched over 120,000 into missions, mobilising the first cross-cultural missionaries from many of the countries they went to.

One of the first major evolutions in OM happened in the ’80s and early ’90s as a result of two world events. The Russian invasion of Afghanistan caused many refugees to flee the country, followed by the first Iraq war when many Kurds were displaced and became refugees.

A number of people in OM, burdened by these people’s suffering, said the organisation must do something. After all, if someone is wet, cold, hungry and in need of shelter, the love of Christ compels believers to help.

Thus, OM added a new guiding conviction: The gospel included caring for the physical needs of people. As with the first ship, not everybody approved this shift. There was tension in OM for a period, but by the 2000s, relief and development were central activities in many fields, especially in the Muslim world.

“We had been very strong on proclamation and wanted to keep that, but realised that in many parts of the world our ministry had to be to the whole person and community. As part of holistic mission, we were also looking at how a person’s gifting could be used in mission; we were looking at the use of sport, business, dance and more in our mission strategy,” Peter explained. “OM’s leadership had been very Western-dominated, and we were seeking to make the movement more comfortable for non-Western people to move into significant responsibility.”

Around the same time, OM leadership also realised that churches had been planted as the natural outcome of OM’s efforts in the Muslim world, Europe and especially India, where new churches were being added every other day. Therefore, OM’s guiding convictions expanded again, recognising that the gospel included the planting of churches.

Of course, following the innovative nature of OM’s early days, new churches rarely used brick and mortar structures to house worship gatherings. Instead groups of new believers and seekers began meeting in living rooms, on beaches and, in Kabwe, Zambia, in a World Cup viewing tent.

The community of Makwati gathered in the 200-person tent to watch the month-long sporting event in 2010. Thirty days of football transformed into 30 days of encouragement; people started becoming Christians. When the tournament ended, people didn’t want the new community to end. The rented tent had to be returned, so the new believers met in the open air until a shelter of wood and tarps was made. Makwati Community Church was born.

In 2014, OM appointed a third International Director, Lawrence Tong. He called the organisation to a period of prayerful review and future planning. Through research OM found itself evolving once more in a major way. Increasingly, OM was no longer just about the proclamation of the gospel. Instead, workers wanted to see the gospel take root in a community, transforming lives and the community itself.

Today, OM is an organisation with 3,400 workers, serving in over 110 countries, coming from 115 nations. According to OM’s core conviction, the gospel has the power to change everything. It is not just about the eternal destiny of someone’s soul, but his or her life now. The gospel of the kingdom speaks to change in society through the teaching of Jesus being lived out by His followers. OMers still evangelise, still give out literature and still do community development—but they do it now with the focus of wanting to see vibrant communities of Jesus followers among the least reached.

Published: Wednesday, 20 December 2017
Credit: OM International
© 2017 OM International This email address is being protected from spambots. You need JavaScript enabled to view it.