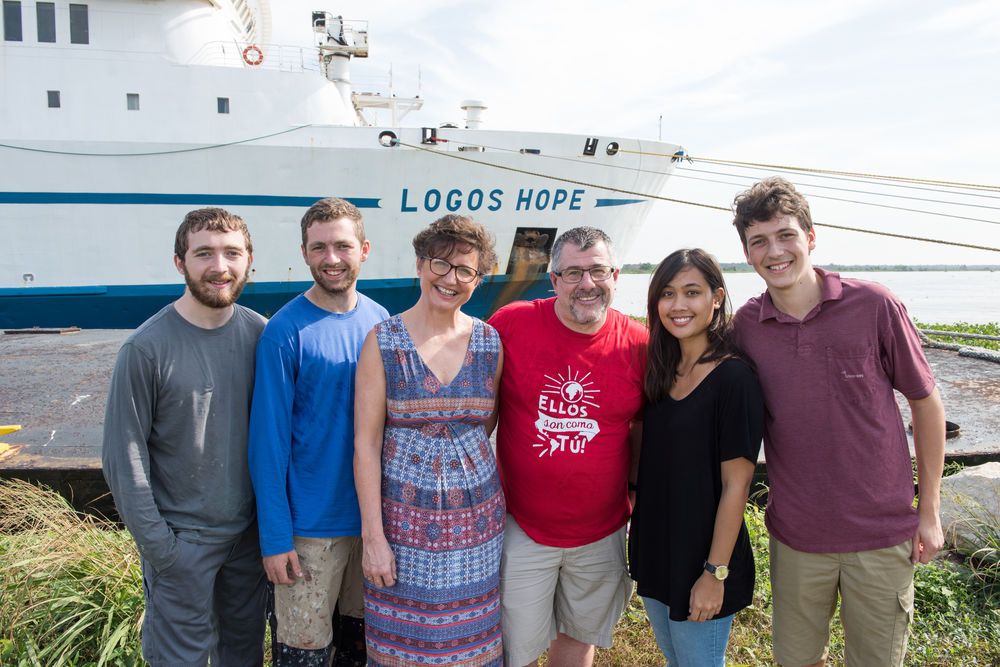 Colombia: Barranquilla, Colombia :: Original Logos crewmembers Kathy and Mark Knight (Australia and UK, centre) mark the 30th anniversary of the shipwreck with second-generation crewmembers currently serving on Logos Hope. Left to right: Matt and David Taylor (UK), Victoria Surjantoro (East Asia Pacific)and Benaya Keppler (Germany) are children of people who served alongside the Knights in 1988.
OM Ships crewmembers, past and present have marked the 30th anniversary of the shipwreck of the ministry’s first vessel, the original Logos.

In a prayer evening on board Logos Hope, the community was told the story of how Logos hit rocks in a storm in the treacherous Beagle Channel, between Argentina and Chile. With many of the volunteers being younger than 30 years of age, they knew little about the events of 5 January 1988. Seeing images from the time, hearing personal details and realising the parallels as they live on an oceangoing vessel and fulfil similar roles helped them identify with their forebears and appreciate more of the Ship Ministry’s heritage.

Although the ship was lost – along with everything she contained – none of Logos’ 141 crewmembers were harmed in the accident. Eyewitnesses on Naval rescue vessels declared it ‘a miracle’ that everyone lived to tell the tale. A poignant aspect of the commemorative evening was hearing from some of these surviving crewmembers. Mark (UK) and Kathy Knight (Australia) are still volunteers with OM Ships and are currently on board Logos Hope. They shared how they have come to recognise that God proved His faithfulness then, in order to prepare them to face future tragedy: the couple went on to experience the death of their teenage son some years later.

Brothers David and Matthew Taylor (UK) shared news from their mother, who was Logos’ doctor in 1988. She had the added complication of moving a patient with a broken leg from the sick bay to the lifeboats as the tilting ship was being abandoned. Andrea Taylor (nee Lewis) emailed her memories:

“I had my medical bag to take and sneaked my diary into it, feeling a level of guilt about making use of that privilege,” Andrea wrote. “Thinking now about that moment when we knew we needed to abandon ship, it feels like a very emotional one but at the time it was just like doing boat drill – but for real. It was remarkably orderly despite some slipping on the sloping deck as sleet fell in the grey half-light,” she recounted.

Her older son, David, who is 25, is now a deckhand on Logos Hope. “I can put myself in the position of the deckies back then. I’m in our medical team – so I’d be going from person to person, dealing with those who would be anxious and nervous; the ones with small children, the one with the broken leg – a bit like my mum,” he reflected.

Benaya Keppler (Germany) knew his father's Logos story but the family was unaware there was a photograph of Matthias in action from the time. Benaya was delighted to be shown an image from Logos Hope's archives, which he could identify as his dad and email home, to share the anniversary in a special way. 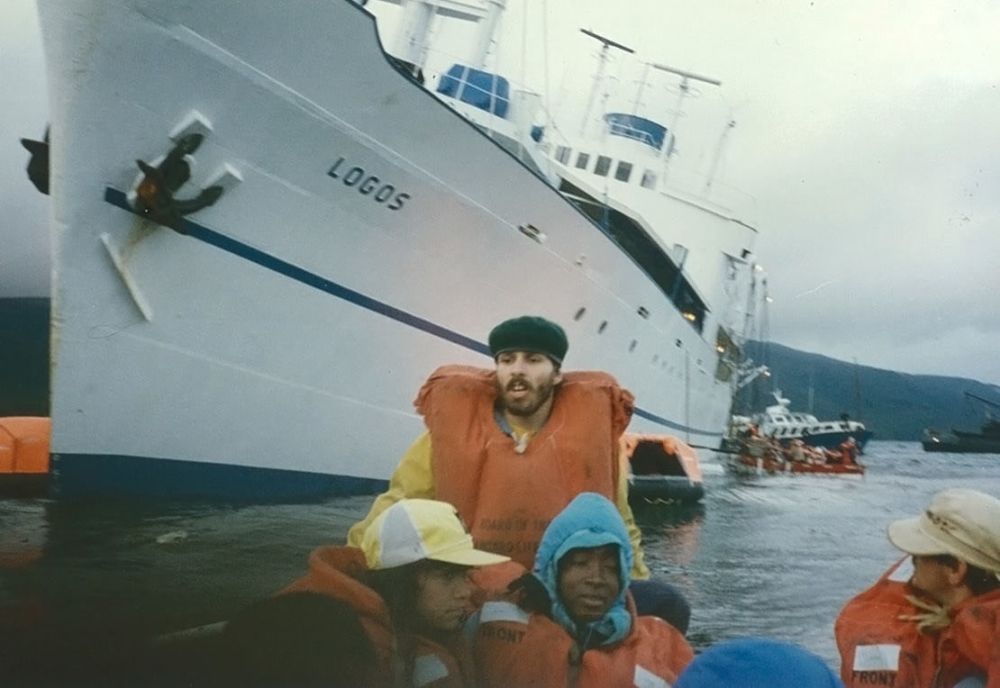 “My father was a carpenter on Logos and the coxswain of a lifeboat,” said Benaya. “When he was lowering his boat and the ship was hanging over him at a dangerous angle, he realised that if the ship sank, he wouldn’t be able to just jump off to try and save himself – he would have to wait for everyone he was responsible for. He told me God showed him it’s about Him being in charge, and not about how much control we think we have over our lives. Of course, my father partly inspired me to serve the Lord on Logos Hope today.”

For Mark Knight, who was the bookfair manager on Logos and now works from England in a senior leadership role with OM Ships, being back in South America to mark the anniversary on Logos Hope was an emotional experience.

“To be standing on terra firma in the north of the continent, when we were on Tierra del Fuego in the extreme south in 1988, and to have seen some of what God has done in the middle in the last 30 years is amazing,” smiled Mark. “It’s so special and rewarding to see children of OM Ships people who have taken on board the first-generation vision and mission and values, and are living that out as a conscious choice now that they are adults.”

David Taylor delivered encouragement from his mother to the current crew, reminding them to embrace adventure and trust that they all they will experience in life is part of God’s bigger story. David said of the anniversary: “It makes me think about the legacy that we are all a part of. I feel like I’m standing on the shoulders of giants.”

To read the full story of the Logos shipwreck in January 1988, click here

Published: Friday, 05 January 2018
Credit: Julie Knox
© 2018 OM International This email address is being protected from spambots. You need JavaScript enabled to view it.