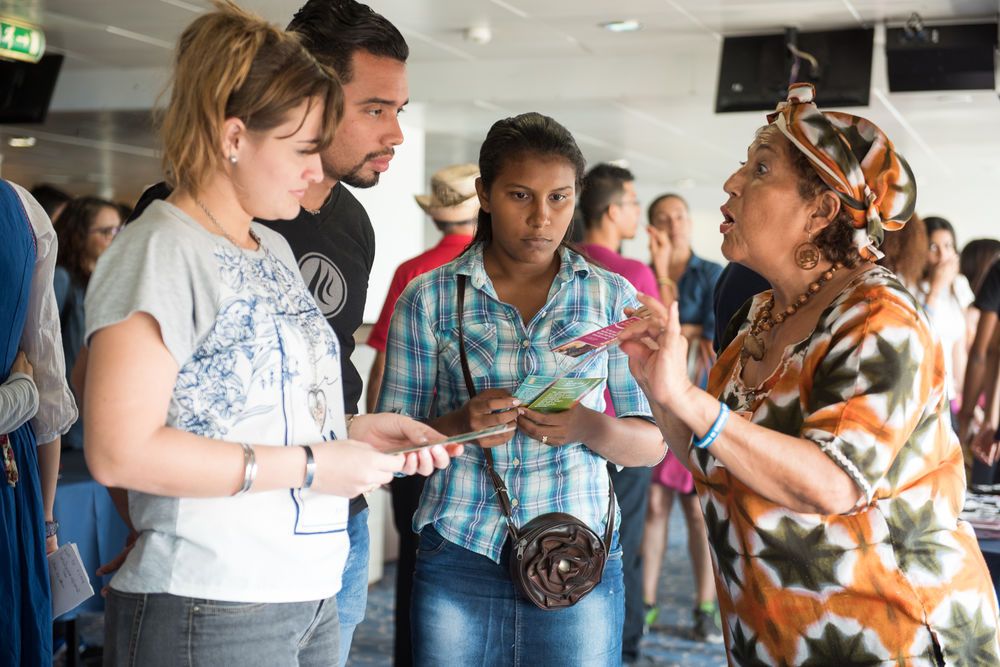 Colombia: Barranquilla, Colombia :: WEC missionary Jazmin Abuabara (Colombia) gives information about Africa at the missions fair on board.
Various Christian organisations operating in Colombia and around the world gathered together under one roof for a special event on Logos Hope. The missions fair drew in local believers who were eager to learn more about serving God full-time and gave them the opportunity to speak to crewmembers who have left their own countries to do just that.

Along with Colombian ministries to marginalised people and those promoting fairly-traded indigenous products, there were networks to connect young people with opportunities across the world. A sports outreach had a stand, as did CRU Colombia, which works among students.

The Latino branch of the international missionary agency WEC was also represented. The organisation came to Colombia in 1933, and now focusses on sending believers out to share the gospel in parts of the world where fewer than two per cent of people have heard the message. Manning the WEC Latino stand was a Colombian woman wearing traditional African fabric and sharing her story with visitors.

At the age of 40, Jazmin Abuabara left her job as a maths teacher to go to Bible college. She became a missionary and served in Equatorial Guinea for the next 15 years. “Operation World’s book [giving information to inform prayer for every country] was key in my call. It’s from that book that I got a vision for the nations,” she explained. Jazmin helped to plant churches and teach children in Equatorial Guinea. “We saw them move from crisis to Christ – and now those ministries are in local hands.”

Back home in Barranquilla, Jazmin is an example to recruit others from her own country. “Twenty years ago, when I left, Colombians were just beginning in mission. Now we can say we did it, and it is possible. The Church is more aware and churches are larger, with resources to send missionaries.”

Distance isn’t as daunting in the 21st century, thanks to better communications. Jazmin recalled, “I phoned my mum twice in my first four years – but then the internet arrived in Africa; so young people today can stay connected and they’re excited about finding their part to play.”

Jazmin throws her support behind OM’s Ellos son como Tu (They are like you) initiative, to encourage Latinos to share the gospel in least-reached communities. “We learn that we are like them. We know the Latino can adapt so well, in terms of physical appearance, in Middle Eastern or Asian cultures,” she said. “Many have learnt to live with little, here in Colombia; so they can adjust well to circumstances in other places. We have so much in common as we come alongside others to share ‘Christ in us, the hope of glory!’”

Published: Tuesday, 23 January 2018
Credit: Julie Knox
© 2018 OM International This email address is being protected from spambots. You need JavaScript enabled to view it.