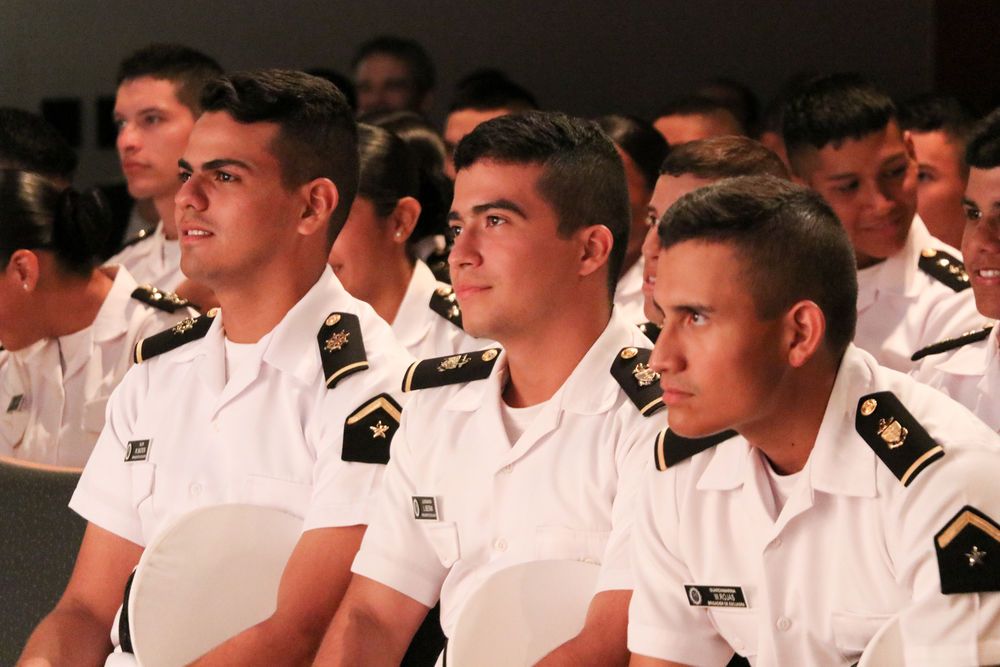 The vessel’s Hope Theatre was a sea of white, as 300 personnel in their uniforms filled the venue. The men and women were treated to a programme of music and dance in which several of the different cultures represented by Logos Hope’s international crew were conveyed. Crewmembers dressed in their national costumes performed a Mexican dance, followed by a traditional fan dance from Korea.

As well as a lively percussion drum performance and a dazzling light show set to music, the naval officers and sailors were welcomed by Logos Hope’s captain and heard from the first mate and the safety officer, who was formerly an officer in the Romanian Navy, about what motivated them to serve on a different kind of vessel as unpaid volunteers.

The event built on the excellent relationship with Colombia’s Navy which has been a valuable connection during Logos Hope’s time in the country. The organisation is grateful to naval base commanders who have proved firm friends and generous hosts, as Logos Hope was docked at a naval base in the previous port, Barranquilla; and has benefitted from kind cooperation during her ten weeks in the country, in three different port cities.

“The purpose of this event was to encourage the mariners through our stories – which might resonate with some of their experiences,” explained Wynand Scholz (South Africa), who planned the evening. “We wanted to challenge them about the purpose of their life and motivate them to find meaning and balance in their priorities.”

The evening offered the opportunity to connect with officer cadets who accompanied their superiors to the vessel and were distinguishable by their black shoes, whereas fully-fledged officers wear white. Several of Logos Hope’s crew were able to chat one-on-one with cadets about their career aspirations and offer own their perspective.

The evening was topped off with a lively performance from the Colombian Navy’s brass band, accompanied by a female officer soloist and plenty of audience participation.

Published: Tuesday, 27 February 2018
Credit: Julie Knox
© 2018 OM International This email address is being protected from spambots. You need JavaScript enabled to view it.