The language of faith 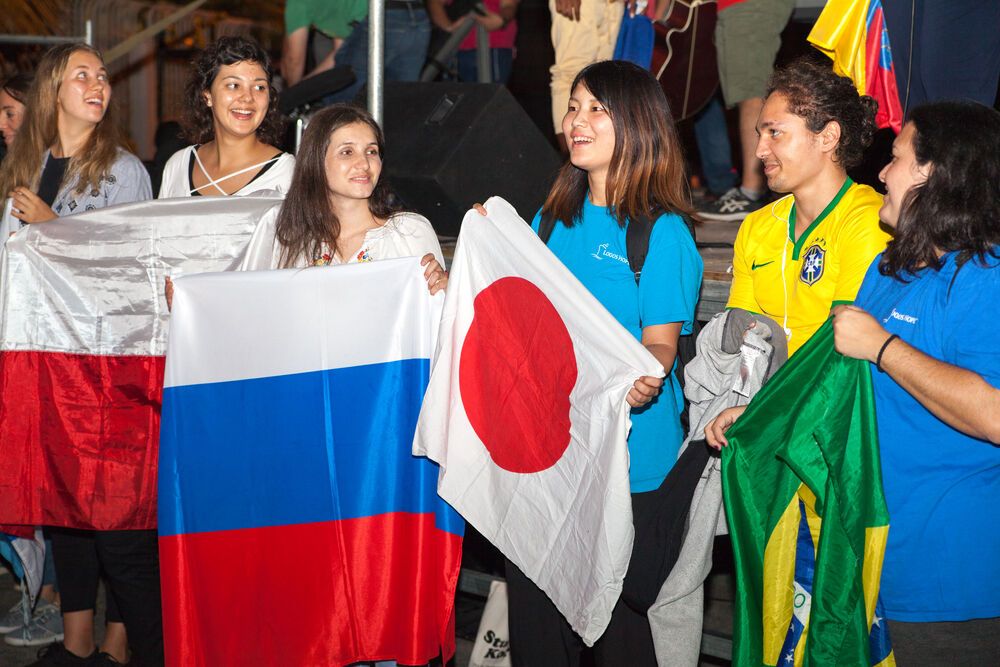 Guatemala: Puerto Barrios, Guatemala :: Crewmembers introduce themselves using their national flags.
Around 100 young people from Puerto Barrios gathered for the Jesus calls you festival, held on the municipality’s boardwalk. Among those participating were 25 crewmembers from Logos Hope.

Irma Ismalej woke up at two o’clock in the morning to bring her four-year-old son Andrés from their town to Puerto Barrios. “I wanted to be at this festival and meet the Logos Hope people,” she said, excitedly. Sitting on the edge of the boardwalk with her son in her arms, Irma seemed to take no notice of the glorious sunset behind her, but gave the crew her full attention. “To see them is to return to a wonderful and extraordinary stage of my life,” she said, explaining that she had been among the crew of sister ship Logos II fifteen years ago and travelled through Europe, Asia and the Caribbean on the vessel.

'The only thing I want is to adore you,' sang the praise group from Alpha and Omega Church, which organised the festival. The church’s pastor, David Ayala, told the team from Logos Hope: “Your presence is a blessing to our community.” Adriana Dávila (Ecuador) introduced her shipmates, who held up a brightly coloured array of their national flags; which included South Africa, South Korea, Brazil, Japan, Finland, Argentina, Austria and Trinidad and Tobago. There was applause and dancing as the team sang worship songs in their native languages, inviting Guatemalans to join in with the music.

Prisca Hirschler (France) sang a moving song about people who have left everything behind to share the gospel in countries where people may never have heard about Jesus.

“This beautiful event is a great opportunity for our community to know that Jesus is real, that Jesus is alive and He is the Lord of all these young people who travel the world to witness to Him,” said the event’s coordinator, Joel Martínez. “It is a gift from God to have these young people of different nationalities sharing their experiences, their music and the hope they have. These people hug us, they smile at us and although sometimes we do not understand their native language, we can understand their language of love and faith,” Joel concluded.

Published: Friday, 23 March 2018
Credit: OM International
© 2018 OM International This email address is being protected from spambots. You need JavaScript enabled to view it.

Guatemala is the land of many trees and many churches. OM has been present in this Central American country since 1990.

OM workers in a small town in Guatemala help five unregistered children obtain official papers and be able to go to school.

A team from Freedom Climb visits a project of OM Guatemala and is a huge blessing to the team and the families involved.

Puerto Quetzal, Guatemala :: An event takes place on board Logos Hope to thank the port authorities for their help - and encourage them to share hope.

Puerto Quetzal, Guatemala :: Guatemala's First Lady visits Logos Hope and thanks the crewmembers for sharing knowledge, help and hope to the nations.