Latin bridge to the least reached 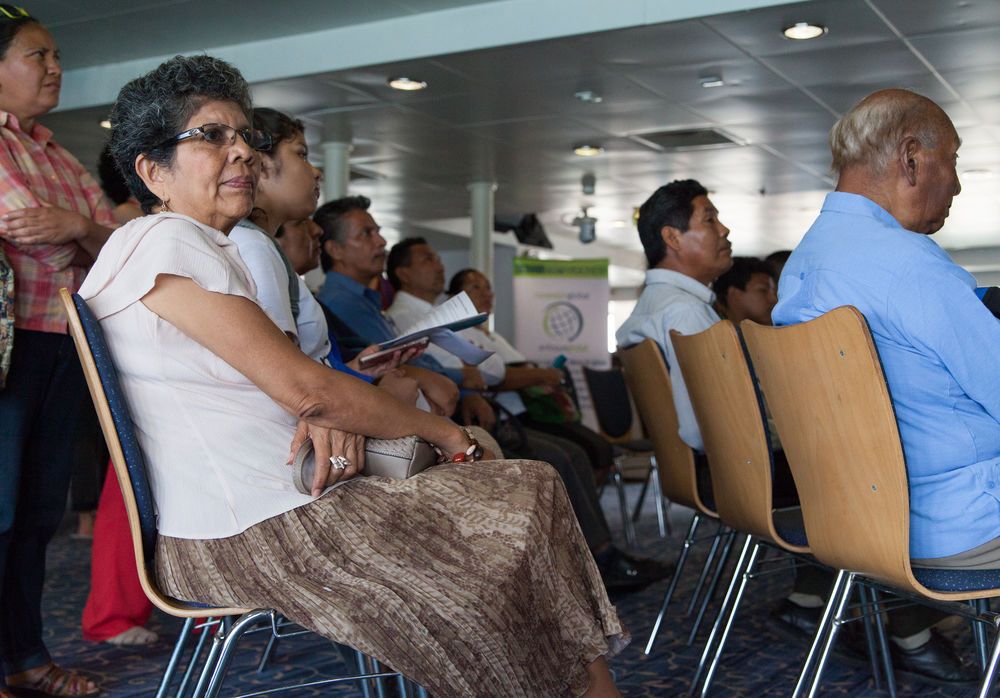 Mexico: Veracruz, Mexico :: Visitors listen at an event on board Logos Hope.
Christians who share the good news globally, Daniel*, Samantha* and Vincent* offered a conference entitled 'Latin bridge to the least reached' aboard Logos Hope in the port of Veracruz. The day's aim was to encourage and train those who are interested in working among least reached people in Central Asia as well as all over the world.

“I feel wonderful to be able to connect with others to talk further about God's ways and vision for reaching others with Jesus' love,” said Samatha, “I am encouraged when people participate in world missions: by going, sending, praying or giving financially to God's work.”

During the conference a video presented Operation Mobilisation's initiative to equip Latin Americans for world mission: Ellos son como Tu! (They are like you). Those gathered also heard personal stories from a challenging series entitled More than dreams. It features video clips from men and women who had no knowledge of the gospel and no contact with Christians; yet their lives have been transformed after they experienced dreams and visions pointing them to Christ.

José Enríquez, a member of a local church, was impressed by what he heard and saw. He said he was praying for the great need that exists in the countries of Central Asia. “Because they are part of us and they were created by God, with the love of God, we should love them and share with them the message of hope so that one day we can all be in the Kingdom of Heaven,” said José.

Mexican pastors, missionaries and members of local churches attended the conference. Among them, Manuela Aguilar Valdez, who is from OM Mexico's team in Guadalajara, thanked Logos Hope for organising the day, which she described as “very enriching, because it helped us to understand the great need to reach these remote people.”

Valentín Luna, a member of the Free Brothers of Veracruz Church, said that it was very interesting to "get to know the great need that exists around the world."

The conference pointed attendees to various sources of further information on the topic and left many with a desire to pray with renewed dedication for Central Asian people and those working among them.

Published: Friday, 20 April 2018
Credit: OM International
© 2018 OM International This email address is being protected from spambots. You need JavaScript enabled to view it.