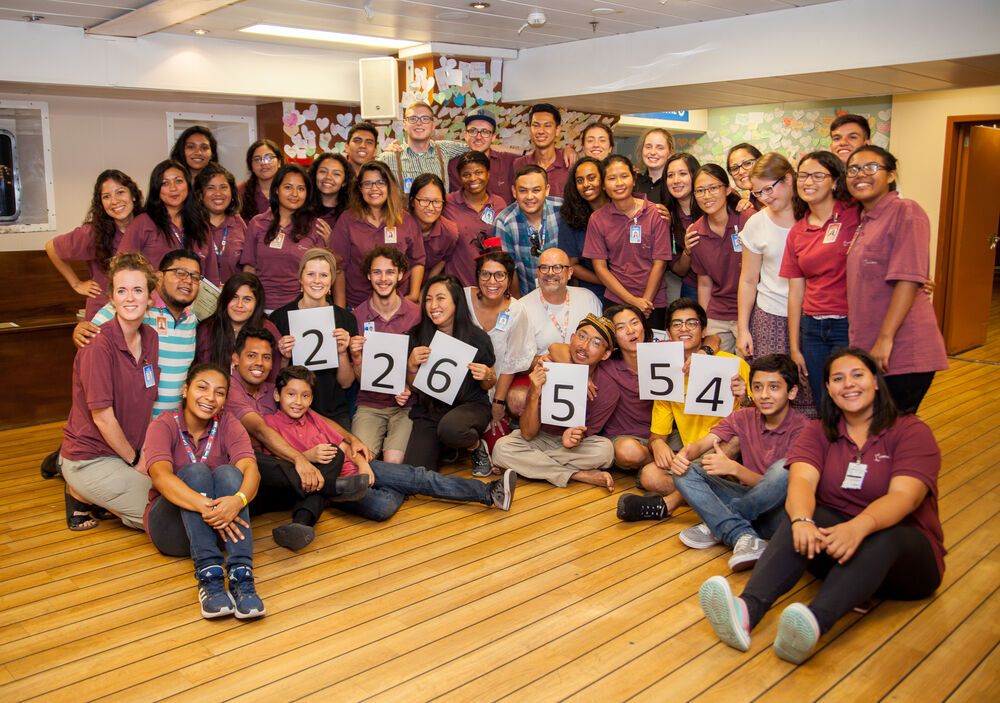 Mexico: Veracruz, Mexico :: Crewmembers and volunteers celebrate the final visitor count for the port of Veracruz.
Logos Hope’s visitor count in Veracruz has broken the Ship Ministry’s all-time record for a single port.

A total of 226,554 members of the public climbed the ship’s gangways to browse the bookfair, sample the atmosphere in the International Café or attend an onboard event during the six weeks the vessel was open.

The figure represents only the second time any of the organisation’s four ships has surpassed the 200,000 visitor tally. The previous record was set 30 years ago; when 201,710 people stepped on board Doulos in Taichung, Taiwan, during a 19-day port call in September 1988.

Seelan Govender (South Africa), Chief Executive Officer of OM Ships International, welcomed the exciting news. “We are constantly asking, ‘Is the Ship Ministry still relevant? Are we still accomplishing what we believe God has called us to do?’ I believe these numbers certainly reinforce the sense that there is a strong appeal for the ministry we have been given.

“More than that,” Seelan continues, “What excites me is the opportunity this gives us, with a reach that is far beyond what we could do without a ship: in challenging people, in motivating people, in moving them one step further in their understanding of the kingdom of God, who God is and what God has done for them.”

Veracruz has traditionally given OM’s ships a warm welcome. All four vessels have visited the city in a total of six port calls since 1979. Each time, large numbers of people have been drawn to the floating bookstore and to connect with the international community of Christian volunteers. In almost 50 years of the Ship Ministry, total visitor numbers for a single port have exceeded 150,000 on only eight occasions. Two of the eight were previous calls in Veracruz: in 1982, when Doulos docked for three weeks, and in 2003, when it was the turn of Logos II.

Even though 15 years have passed since that last visit, Logos Hope is clearly as popular as her predecessors were. It was symbolic that this call in Veracruz marked another milestone as the current vessel’s seven millionth guest was celebrated.

It’s not statistics that matter to the CEO, though. Whilst figures like these are encouraging to partners all around the world and useful to inform how Logos Hope prepares for future ports, Seelan’s drive is that each individual leaves the ship having been impacted in a personal way.

“Through a book they may have purchased; through a conversation they may have had with a crewmember who comes from a totally different part of the world; through asking questions like, ‘Why are they living on board and why do they give their life to something like this?’ it’s our desire that each visitor experiences something that causes them to evaluate who they are and where they’re going, or to reinforce the values system within their own life.”

Seelan concludes, “My hope is that we will see lasting impact that goes on to bear much good fruit in people’s lives – not only in Mexico, but to the ends of the earth.”

Published: Wednesday, 09 May 2018
Credit: Julie Knox
© 2018 OM International This email address is being protected from spambots. You need JavaScript enabled to view it.