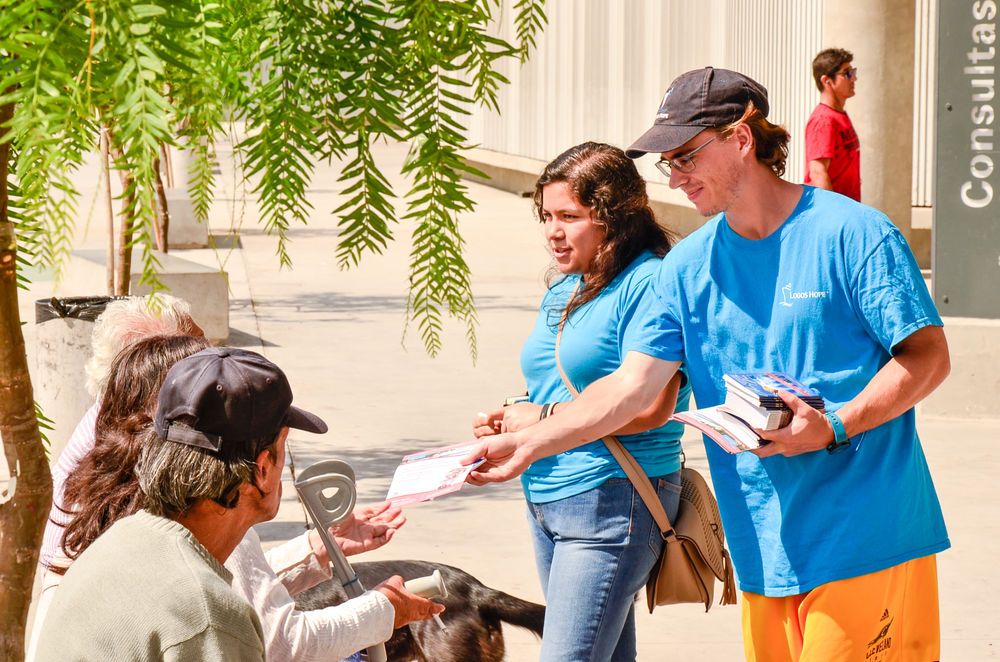 Chile: Antofagasta, Chile :: Emmanuel Schwartz (France) and Valeria Balderas (Mexico) invite people to visit Logos Hope.
Logos Hope volunteers connected with people in front of Antofagasta's hospital, to tell them the message of the good news and pray with those who are unwell and their visitors.

The crewmembers approached people waiting to receive treatment and their relatives outside the hospital. After introducing themselves, they asked if there was anything they could pray for. When people accepted prayer, the crewmembers spoke with them more personally, prayed for their requests and told them about their own faith.

The volunteers met a woman who was looking after her two granddaughters while her daughter was in labour inside the hospital, about to welcome another child into the world. The woman explained that she is not in fact the birth mother and grandmother, but that she had taken on the child her sister abandoned and had brought her up as her own. The volunteers talked about forgiveness and the fact that people can forgive as God forgives them.

Later, the team met another woman who was waiting for her son. He had become bipolar as a consequence of brain surgery. The woman explained that she believes in God and had been meaning to ‘look into it more,’ and start reading the Bible, but she admitted having difficulties finishing things. She nevertheless explained that she felt different this time.

As the crewmembers gave her a Gospel of John, she said, “I want to start reading it. Usually I am not interested in this kind of conversation, but with you it is different.” She added, “Maybe I am waiting for my moment...” to which a volunteer replied, “Maybe your moment is now.” The crewmembers invited the woman to visit the ship, which she did, a few days later.

Idalia Mujica Jaque, a woman from a local church who facilitated the team’s outreach, thanked the crewmembers for their help: “The way you shared the gospel really drew our attention," she said. "We tend to be rather shy. My daughter and I were watching you and said to each other, ‘Look how brave they are!’ This is an important example for us.”

“I want my children to go to an event on the ship so they can be more motivated. Working with your team was a beautiful experience,” Idalia said.

Published: Wednesday, 23 January 2019
Credit: OM International
© 2019 OM International This email address is being protected from spambots. You need JavaScript enabled to view it.

When asked to share his testimony, a participant of OM Chile's Adventure Team realises just how much God has worked in his life.