Planting a church? Start with sports 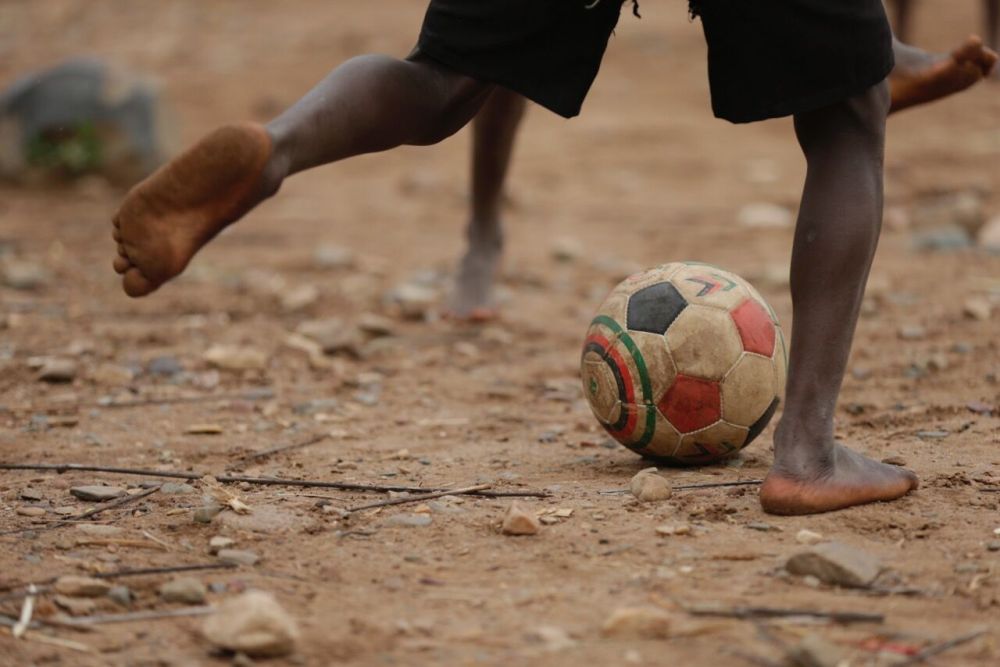 Zambia: Football is being used at Lake Tanganyika, Zambia, to reach out to young boys and make disciples.
“The people in the villages are very passionate about fishing and football,” said Christopher Kasale, field leader of OM Lake Tanganyika. “You can talk to anyone with [one of these] as a platform. So that is why sports were used as a catalyst to plant the church in Mwando.”

Mwando is a large Zambian fishing village along the shores of Lake Tanganyika.

Ten years ago OM sent workers to the village to observe the area. There were no churches in the village of about 2,000 people.

“People went [to Mwando] in the beginning not to plant a church, but just to befriend the people,” Christopher said. “They made friends, made relationships, then the time came when we realised that that place needed a church.

“[But] we don't want to plant churches. We want to help our disciples plant the church, and help facilitate the process.”

That is where sports came into the picture.

In 2012, Cecilia Kasale moved to the village with the purpose of doing sports ministry with Dimas, a friend of OM and a local resident.

Cecilia reached out to the young children and girls through netball and other games, while Dimas started a football team with the boys.

The way the two coached and worked with the young people caught the attention of the community, and other coaches wondered how they did it.

Cecilia and Dimas organised a sports leadership training for any coaches who wanted to attend from the surrounding villages.

During the training, the 25 coaches realised that it was about more than just sports, it was about God. As Cecilia and Dimas gave testimonies of how their lives have been transformed through sports and the influence of former coaches the participants responded. A few of them stood up and gave their lives to Christ on the spot.

The coaches began a Discovery Bible Study (DBS) together, studying the Bible and growing in faith and numbers.

Discovering the Word of God and realising that no one could help them the way the Word was helping them, a church was started in Mwando. They met where the sports leadership training had taken place, beneath a few trees; later they moved into a temporary shelter of thatched grass, with plans to build a brick structure.

While Cecilia and Dimas develop more disciples through sports and DBS, OM worker Howard Sichilima moved to the village to develop the church and its new leaders. Howard's wife, Josephine, reached out to women through skills training, such as sewing and tailoring.

“The Lord gave us the people,” said Howard. “Children. Ladies. Youths, Men... Then I made sure that [those] people were grounded in the Word.”

Once a church has been established, OM Lake Tanganyika encourages the church to become affiliated with a mainline church for accountability and support. The village church became the Christian Fellowship Church after leaders visited the village to discuss and compare their doctrines.

Today, 70 people attend the church, and some of those first sports-minded people are serving in leadership positions. The village's head woman has also become a church member.

“She stood at a distance and watched how the church was coming about [before] realising that she needed God,” said Christopher. “Now she is in the church and is also a leader of the village, so the Christian influence among the people is [getting] big.”

Coach Dimas is still part of the church and its leadership. His heart is to go to other villages, using the same strategy of sports to plant churches. A DBS has already started in Chaushi, a neighbouring village, through a football team.

“God showed us that we were to start with sports,” said Howard. “The sports helped a lot to gather [people], starting from the small children to the adults. So it was very easy.”

Thank God for the church in Mwando. Pray that it continues to grow and make disciples through DBS, sports and skills training. Pray that the church will continue reaching out to neighbouring Chaushi, and that the people will respond to the Gospel.

Published: Friday, 27 November 2015
Credit: Rebecca Rempel
© 2015 OM International This email address is being protected from spambots. You need JavaScript enabled to view it.

Simon and Edah share Christ's love with people by meeting them where they are at. That often means being on the football field or with a sewing needle in hand.