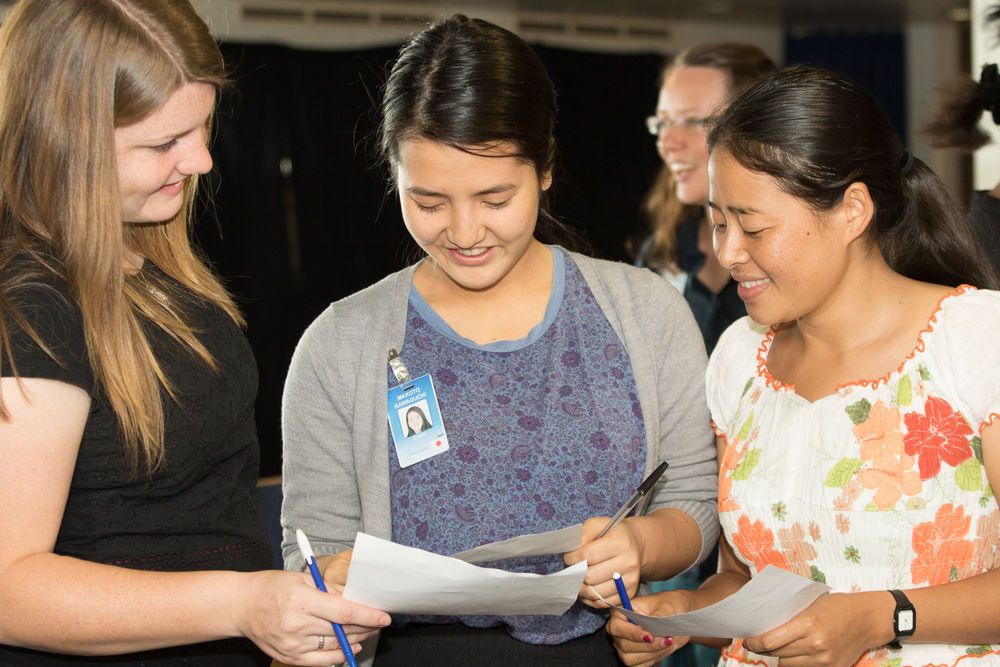 Tanzania: Dar es Salaam, Tanzania :: Jems Fitzsimmons (UK), Makoto Kawaguchi (Japan) and Viviann Yang (East Asia) play a game together at the pastors wives event in the Logos Lounge.
Logos Hope was privileged to host a number of local pastors’ wives for an appreciation lunch. Often working quietly behind the scenes to facilitate church organisation and growth, these women rarely stand in the spotlight and are hardly ever honoured for their faithful duty.

Having patience and endurance doesn’t often promise rewards equal to the hardships that these wives go through, and being ignored can cause burnout, even in the most responsible person. In addition to commending the women’s work, crewmember, Kim Kukura (USA), who spoke at the event, focused on reminding them of God’s promises.

“No medal, compliment, or trophy given here on Earth will last into eternity,” shared Kim. “The time we devote to God instead leads to heavenly riches, and we all have to learn to approach servanthood from a different perspective.”

Kim’s reminder was followed by a message about building bridges between the different denominations in Dar es Salaam. The message emphasised that as God’s people, we are called to wholeness and unity as the body of Christ. No doctrinal or denominational argument should hold enough weight to keep us from fully loving our brothers and sisters.

"One of the main problems in the church here is denominationalism," shared crewmember Natalie Moyer (Tanzania), who lived in Tanzania for many years and often experienced the chasm between different church groups.

One guest remarked that it was partially because of the clear divisions between church groups that several women involved in their churches didn’t make it to the appreciation event. But despite that, she believed that God would work through those who heard the messages, bringing the family of Christ closer and growing more into His likeness.

Pray for the pastors' wives in Tanzania to hold onto God's promises in difficult times, and pray for God to heal the divide between the denominations and for the churches to experience unity as brothers and sisters in Christ.

Published: Tuesday, 16 February 2016
Credit: Annika Lee
© 2016 OM International This email address is being protected from spambots. You need JavaScript enabled to view it.

“I pray: ‘Give me the strategy, give me the way, the window to talk with Muslims. For me, my name is a bridge: it sounds Muslim, and they welcome me...