Overcoming spiritual foes on the lake 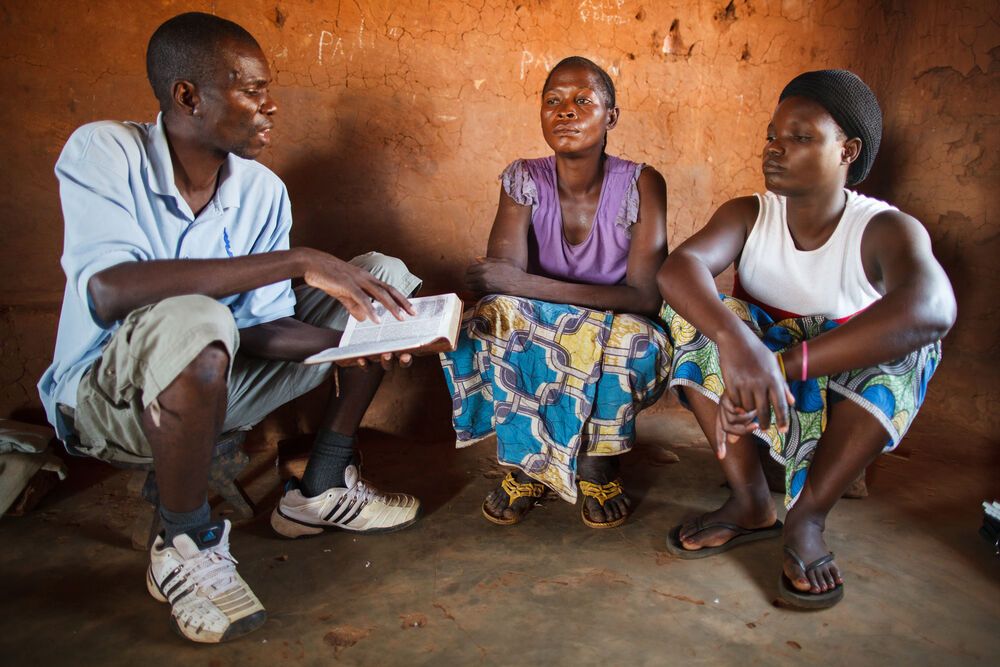 Zambia: Charles Chansa sharing the gospel to two woman in a village on Lake Tanganyika
In addition to the struggles of everyday life, a growing concern for Africa area OM missionaries is the need for continued discipleship among the communities they work in. Charles Chansa, area coordinator in Nsumbu, and part of OM Lake Tanganyika in Zambia, knows the problem well.

The Nsumbu village sits near the Democratic Republic of Congo border, northwest of OM Lake Tanganyika’s base in Mpulungu. There, Charles and his team have led several locals to Christ, only to see them return to old practices and ‘traditional medicine’—meaning witchcraft—revealing what Charles calls “their true Christianity.”

It’s not an impossible problem, as God’s grace demonstrates, but it does require a concentrated effort from Charles and his team to reach locals as they fight on a spiritual level.

Some time ago, Charles remembered, there were three women in the village who were pregnant at various times. All three suffered greatly from the hot weather. They told Charles later that they almost died from the pain they experienced. All three babies were stillborn.

Recently, the women became pregnant again, and when the pain returned, they visited the village’s traditional doctors, received medicine, and were assured that their babies were fine. But when the pain didn’t stop, they looked to Charles and the OM team for help.

“We sat down with them and explained that we don’t give out medicine, but we know that, by calling on the name of Jesus, if spiritual forces have been causing their pain before, that their pregnancies would not end as they had before,” Charles said. “I read them the Bible, I led them to Christ, and we prayed with them that they would have faith that Jesus was [with] them.”

Just two days later, Charles received word that one of the women had given birth to a living, healthy child.

In another instance, before a self-described “cursed” man came to see the OM team, he visited local doctors who told him that another man in the village had cursed him. The man who had been cursed found the man who had supposedly cursed him and threatened him.

Without a resolution to the problem, the man continued to feel worse physically, as problems with his eyes and stomach arose. Medicine and alternative methods of healing brought no relief, but he eventually found true relief, by God’s grace, in forgiveness.

“He came to us and we sat down with him and explained how powerful Jesus is, in comparison with witchcraft,” Charles described. “Then we explained to him that, in order to experience healing and deliverance, he needed to forgive the man who he suspected to have cursed him. He told us that he was ready and we reminded him that if we prayed for him, he shouldn’t pay this man another visit, but should decide to forgive him and forget about all of that. As we started praying, his symptoms and stomach pain ceased.”

Today, the man and his wife are part of the church in Nsumbu, and the forgiveness he showed to the man who cursed him caused a rippling influence. When the chief of the village heard that the man had been healed, he charged him for goats and money as payment—a common practice when healing occurs. When the man explained that he was healed because he had forgiven the other man, the chief thought he was out of his mind—until the man had the chance to explain that his forgiveness came from faith in Christ.

“I am now a Christian,” he told the chief. “Therefore, I have decided to forgive this man.”

Pray for Charles and the OM team in Lake Tanganyika as they prayerfully take on the villagers' deeply ingrained spiritual practices. Pray that more healings would occur, opening the door for others to know Christ.

Published: Thursday, 31 March 2016
Credit: OM International
© 2016 OM International This email address is being protected from spambots. You need JavaScript enabled to view it.