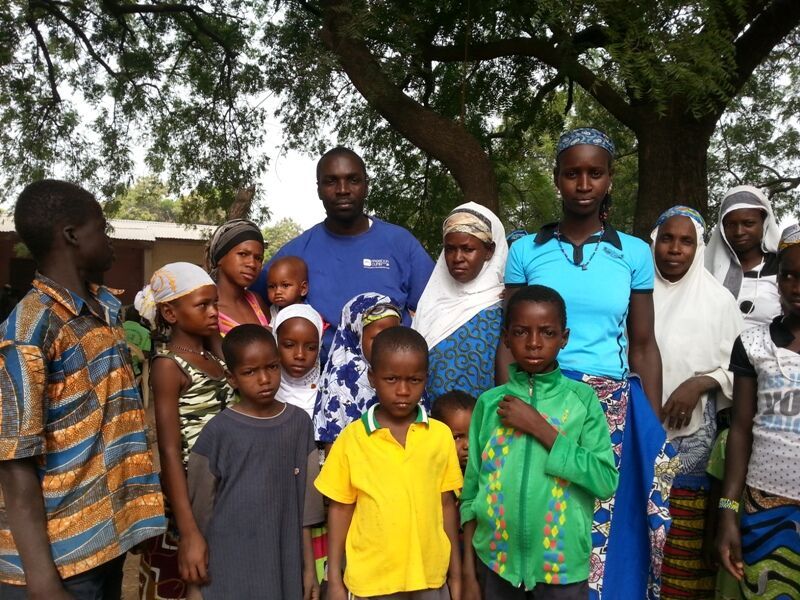 Ghana: Chris with group of Fulani people
In 2011, OM Ghana field leader Chris Insaidoo was travelling with his team to the northern area of Ghana, with a plan to hand out about 10,000 Peterson Bibles.

The darkness of nighttime driving, along with poor road conditions, meant nearly inevitable trouble. Chris hit a pothole and the rim of his tire bent badly enough that it needed to be replaced before the journey could continue. What could have been a quick fix quickly turned into a bigger problem as their small jack couldn’t lift the car weighed down with all the Bibles.

The team decided to go and look for help—an uneasy decision, given the reputation of the local people as robbers. The Fulani people had migrated over many years from Burkina Faso, Mali, Niger and the northern part of Nigeria.

Chris wasn’t comfortable leaving the car in the middle of the road with no protection, but the alternative of taking everything with them raised just as many concerns. The group would be vulnerable to attacks on the road. In the end, the team left their things in the car before searching for help. When the team returned 30 minutes later, they were not surprised to find an empty car, broken into and robbed of all the Bibles, two passports, and Chris’s laptop.

This experience embedded Chris’s first impression of the Fulani people: distrust them, dislike them—never come close to them.

Chris’s opinion of the Fulani didn’t end with one encounter. In 2014, a team from OMNIvision arrived to help OM Ghana film documentaries. During their travels, they saw a Fulani who had kidnapped a young girl who appeared to be about 12 years old. The team later learned that the Fulani man wanted to marry the girl to his 15-year old son. When they asked why, the man told them that his son needed a wife to help him tend the family’s cattle.

Chris asked himself, “How can a human being take a girl of 12 years and give her to a boy of 15 just for the two of them to follow the cattle in the bush?”

His first impression of the Fulani people was confirmed; but it wasn’t the end of the story.

The same year, OM Ghana accompanied Outreach America to the “overseas” part of northern Ghana—so-called because the roads are inaccessible during the rainy season, making travel a struggle. Because of Outreach America’s presence, a number of Fulani people came for help.

It was then that Chris made a sobering discovery: when the Fulani people approached Outreach America for medical aid, the local people of the community drove them away.

“At that moment,” Chris recalled, “something went through me and I thought, ‘What can we do to help these people?’”

Chris made a decision and relayed his plan to Outreach America, asking them to come again for a special ministry only to the Fulani people. The leader of the Fulani couldn’t believe it and asked Chris to repeat himself. He told them that he wanted to return on December 25 to provide free medical care.

The Fulani leader looked at him and said, “When you come, then you also know that we are human beings.”

“I said to myself, ‘Wait a minute. What is he talking about? Is this because the other people asked them not to join them for the medical help?’” Chris explained. “Then I started thinking about what I’d heard about the Fulani people and my own understanding and experience with them.”

Chris and his team kept their promise: they returned on December 25 with medical supplies. All of the Fulani people came for medical care and the team was able to feed them for two days.

“It was during this time that I realized that they are a people that God loves,” Chris said. “That shed my whole previous mentality about the Fulani people.”

Now, OM Ghana is working among the Fulani, and—despite being a people group that doesn’t stay in one place for long—they have asked Chris to start a church among them.

Published: Tuesday, 19 April 2016
Credit: OM International
© 2016 OM International This email address is being protected from spambots. You need JavaScript enabled to view it.