Prophetic art for the people of Isola del Gran Sasso 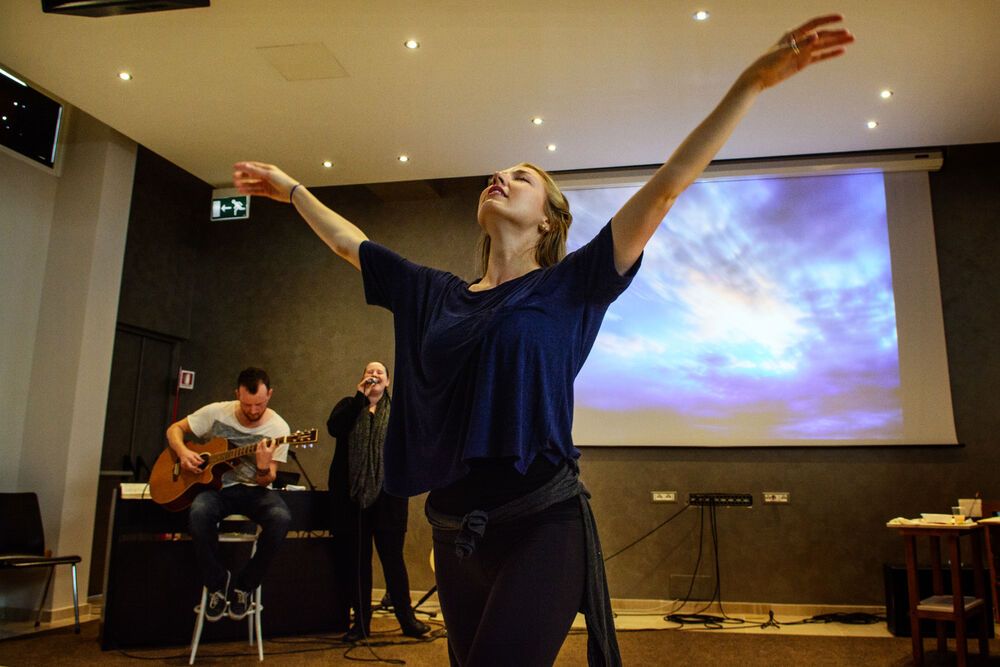 Italy: Dancing this piece was not only a prayer over [the local community] but also a prayer over myself that I would still be able to dance with my eyes closed even if its scary or seems risky, it?s worth it,? OM Arts dancer Martha said. Photo by Garrett Nasrallah
Artists participating in the Incarnate programme were charged with creating a collaborative piece of prophetic art intended to speak to the people of the local community, Isola del Gran Sasso, Italy.

Incarnate is a 16-week holistic discipleship programme for artists led by OM Arts International. The first twelve weeks are spent in residence (Incarnate 2016, in Isola del Gran Sasso) and during the last four weeks participants are sent out for a practical placement. The programme is designed for artists who are passionately pursuing God, dedicated to their disciplines and are interested in using their art in cross-cultural missions. Participants engage in artistic and spiritual mentorship, as well as academic courses to learn more about who God is, what role they have in God’s story and, lastly, how they interact as artists with the stories of others worldwide.

Artists from several disciplines were paired together and, as a group, were challenged to consider what they have observed during the recent months in residence in the small mountain community.

In one such group, Séamus Bannon, Martha Kennedy, Abigail Gaardlykke, Sarah Beth Little, and Amy Knorr prayed that the people of Isola would trust God, even when they cannot see or understand what He is doing.

As a group, they decided that they would create spontaneous artwork. Séamus played guitar, Abigail and Sarah Beth painted, Amy sang and Martha danced their prayer for the city of Isola.

“Prayer was our preparation. We prayed a few days before we presented the piece and also the morning of the presentation,” vocalist and songwriter, Amy Knorr explained. “We were praying that we would be in the right headspace. We wanted to hear what He wanted us to say, play, draw and dance.”

Following time spent in prayer as a group, visual artist Abigail Gaardlykke was reminded of two dreams the Lord had given her that week. In the first dream, she saw herself creating a prophetic painting. The picture she painted in the dream was of dancers that had clouds around their faces and covering their heads. The second dream was similar to the first, and Abigail felt that the repetition was confirming that this was a message from the Lord.

After talking with her teammates, Abigail was certain that her dreams were meant for the group.

“Immediately we saw some connections with a passage that the Lord had given to Séamus (Psalm 18), which was further confirmation,” she shared. “The project was meant to speak to the city of Isola, but I felt strongly that it was for our group in particular.”

The dreams and the passage of Scripture reminded dancer Martha Kennedy of how Moses led the Israelites through the desert by following the cloud by day and fire by night. “The Israelites didn’t know what was ahead of them, because you can’t see through clouds. They trusted God and because of that their enemies were behind them and not in front of them, facing them head on. We took that theme and prayed about how we could convey that.”

While creating, Martha said her first thought was to dance with her eyes closed. She started the piece on the ground with open eyes; she could see but was unable to move fully or freely. When she closed her eyes she rose to her feet and danced with complete freedom.

“I had to trust that God would make something beautiful of it,” Martha reflected. “Abigail’s dream was the visual piece - what she saw. She and Sarah Beth painted a recreation of that dream spontaneously, without any planning. The melody had just kind of come to Séamus and with the theme of clouds Amy sang free verse,” she explained. “There was a framework we were working within, but a lot of room for God to just come in and tell us what to do.”

Once she closed her eyes and began to dance, tears flowed from Martha’s eyes.

“This piece was particularly meaningful for me because I’ve had to let God lead me by the cloud in life, lately. Dancing this piece was not only a prayer over Isola but also a prayer over myself that I would still be able to dance with my eyes closed even if it’s scary or seems risky - it’s worth it,” Martha said. 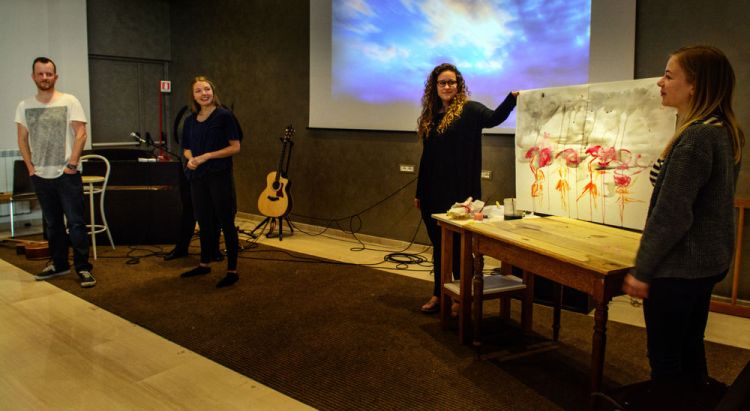 Published: Thursday, 07 April 2016
Credit:
© 2016 OM International This email address is being protected from spambots. You need JavaScript enabled to view it.