A learner, not a teacher 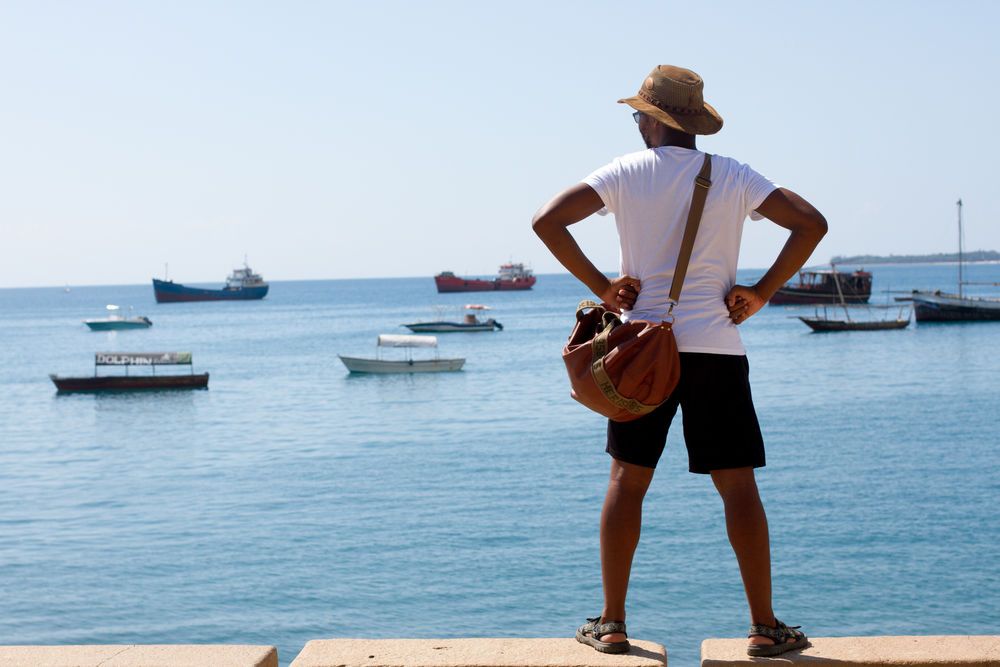 Tanzania: Kagiso looks across the water in Zanzibar, Tanzania
“Every time I heard about something that Jesus did, or David did, or whoever [from the Bible], I could not stop listening,” Kagiso* remembered. “I wanted to hear it all the time. No one actually explained the Gospel to me, so I didn’t know I had to be saved - I just liked Jesus. I thought He was awesome.”

Attending church in South Africa growing up, Kagiso saw Sunday morning sermons as an opportunity to snooze or zone out. One week however, God prodded him to pay attention. The next day Kagiso was talking with a friend about how the pastor’s word had convicted him and the friend told him that he didn’t have to be at the front of church to give his life to the Lord, he could be anywhere. Kagiso committed his life to the Lord in the car then and there.

That was five years ago.

“[Since then] there have been some challenges. It took awhile for me to get rid of some sinful things, but God gave me strength,” said Kagiso. “I mean, I still sin, but not as much as before. I’m not sinless, but I sin less.”

A missionary returning from serving ten years in Kazakhstan spoke at Kagiso’s church, explaining how he got into missions and the challenges of living in a foreign country. Feeling called to do something, Kagiso struggled for a year about what exactly he should do. Job prospects in his field looked good, but God kept nudging him towards missions.

“I sort of made a deal with God,” Kagiso said. “I would go into missions for two years and see how it goes.Then, if I feel that (missions) is where I see myself, I’ll go through with it. But if it is not, I’ll go back home and get a job.”

For a year Kagiso lived in Kabwe, Zambia completing Discipleship and Missions training. At the beginning of his second year, he moved to Zanzibar, Tanzania, to join two other young men in spreading the Good News.

“I really had no idea where I would go,” admitted Kagiso. “But I wanted to go where no, or very little, people had been reached.”

With 99 percent of its 1.3 million population Muslim, Zanzibar was just the place.

Located 25 kilometres off the coast of Tanzania in the Indian Ocean, Zanzibar is the ideal vacation spot for those seeking white sandy beaches, world-class snorkelling, and picturesque sunsets. Those visiting the island in the past weren’t interested in the island’s beauty however. For centuries, Zanzibar was a hub for the African slave market.

Though the slave trade was abolished over a hundred years ago, the impact still remains, particularly the Arabic traders’ influence seen in the dress, customs, and religion of Zanzibar’s inhabitants.

As it is vastly different from his native South Africa, Kagiso is still getting to know the culture and language as he enters his fourth month on the island.

Each day he visits with those congregated around the shops, soaking up the Swahili language with the goal of learning five new sentences a day. Already quite proficient, Kagiso hopes to be fluent in another two months.

Finding opportunities to connect with the locals isn’t hard.

“The guys love soccer here, it’s a common thing. You don’t even need to speak the same language in order to play sports,” Kagiso said. “The people are really welcoming. You will never go hungry here, people are always inviting you to their homes, everybody wants to be friends. Especially if you are new, people want to make you feel welcome. Those relationships, those warm hearts, have really made me feel at home.”

“The biggest challenge is the uncertainty of it all,” he shared. “Would God actually use me to bring people to himself? Am I even worthy to come to a place like this and tell people about Jesus?”

Reading the biographies of missionaries from around the globe, Kagiso has found inspiration and encouragement, particularly from Don Richardson and Hudson Taylor.

“They went into places where the Gospel had never been heard before, to people who were a bit aggressive towards the Gospel, and I’m sort of in a context like that,” explained Kagiso. “I see how they persevered. I think Don Richardson [worked] nine years before he saw someone come to know Jesus and I think ‘wow, he endured for that long.’ I take courage [from reading missionary biographies], and knowing the faithfulness of God. He can use anything, He can speak out of a donkey’s mouth. He really doesn’t need me, but he’s chosen me.”

A learner, not a teacher

“The most important thing I’ve learnt is not to go as a teacher to a place, but to go as a learner. Sometimes you see a lot of things that look wrong, but when you actually ask the people ‘why do you do it like that?’ it makes sense…and you begin to understand and appreciate the culture,” he shared.

“To be humble. Not to think you know everything, but to learn from the people. Not to look down on people, but to get into the culture and whatever is happening; to get into it and become one with the people and not to put yourself aside. In that way, I’ve seen a lot of fruit in terms of relationships and getting closer to people.”

Please pray for the work God is doing in Zanzibar. Pray for fruitful relationships and good conversation between the team and locals. Strength for the local believers. Peace between Christians and Muslims. For the team to be able to purchase property to build a house and the start of sustainable ministries that will enrich lives.

Published: Tuesday, 19 April 2016
Credit: Rebecca Rempel
© 2016 OM International This email address is being protected from spambots. You need JavaScript enabled to view it.